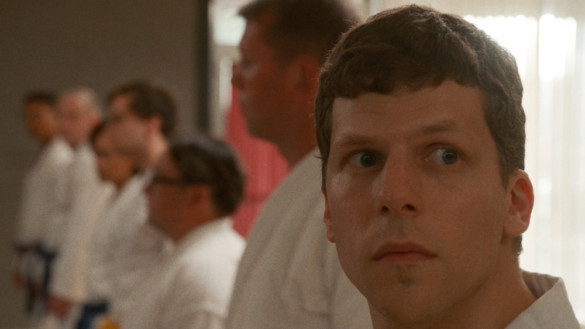 For any of our readers that have covered a film festival, you know that by day three of any festival, you can start to feel yourself hitting the wall. But even with losing an hour of sleep and almost missing my alarm, I was still able to get out to this glorious festival for four films that were completely different, yet wholly original in every way.

The first screening, which I saw at one of the many Alamo Drafthouse theaters in town (which is hands down the best theaters in the country) was Emily Ting’s directorial debut, Go Back to China. The film follows Sasha, a spoiled rich girl that has just graduated college but has no work experience to get a job as a designer. She spends most of her time partying and spending her father’s money, till one day her card is declined and she receives a life changing call from her father. He tells her that in order to get her money back, she must come to China for one year and work at his toy factory to earn what she has taken for granite. The film has a lot of great ideas in bringing together both the American and Chinese culture and the family dynamics within Asian culture, ideas are explored in Crazy Rich Asians but are done way differently in this film. The lead performance from Anna Akana is impeccable and you can truly see that a star is being born in front of your eyes. The rest of the cast, especially Richard Ng and Lynn Chen, do a good job but it is Akana’s vehicle to shine. While I wish the screenplay was a little more focused and the editing was a bit sharper, I would say that Emily Ting gave us a very promising debut that could lead to something special down the road.

Once I got out of Back to China, I drove back to what is becoming my home away from home in The Paramount to see the karate dark comedy The Art of Self-Defense. The film follows Jesse Eisenberg as Casey, a guy who is beat up one night when he is walking home and he decides to learn how to defend himself by joining a local dojo run by Sensei played by Alessandro Nivola. This movie is one of the most muted, yet brilliant dark comedies I’ve seen in a while, with a perfect pace and every moment feels so real to the ultimate eeriness that the film presents. Eisenberg gives his best performance since The Social Network but it is Nivola, who is coming off the heels of his performance in last year’s Disobedience, who steals the show and plays such a layered, unpredictable human being. It won’t be for everyone but this film is a heck of a ride and leaves you with a fun gut punch for an ending.

Once that film’s credits rolled, I rushed next door at The Stateside Theater to catch the supernatural comedy Extra Ordinary. The film follows Rose, a part-time driving instructor that has supernatural powers and can communicate with the dead but after a tragic accident, she decided to quit her paranormal side of life. But one night she receives a call that forces her to break her rule and set back in to the ghost game. The film, directed by first time filmmakers Mike Ahern and Enda Loughman, is an enjoyable send up to films like Shawn of the Dead, Attack the Block and Ghostbusters, while still being its own thing. While a lot of the humor didn’t land for me and the audience I was seeing it with, there was a lot more going on to keep me interested and had some really good special effects for a small film of this size. Plus, anytime a film can have Will Forte playing a singing bad guy, I really can’t say I had a bad time.

So after leaving The Stateside, and grabbing something to eat (which you can forget to do at these festivals), I made my way back over to The Paramount for the world premier for Olivia Wilde’s directorial debut Booksmart. Being that she was the big key note speaker for the film festival and being that Booksmart was the last big premier for the weekend, there were some high expectations mixed with questions as to what the final film was going to be. So it came as a complete surprise that by the end of Booksmart, I sat in my seat thinking that this is going to be the film that we all will be talking about by the end of the year, the film that #FilmTwitter will be all over with praise and love, and it deserves it. Think Lady Bird, Eighth Grade and Superbad all mixed together into this lovely progressive millennial coming of age comedy that felt so fresh and left the room in tears by the end but on the floor laughing the entire time. The ensemble cast is fantastic but its Kaitlyn Dever, Beanie Feldstein and Billie Lourd who steal the show and your hearts and give some of best performances of the festival and the year so far. I can be safe to say that much like Greta Gerwig, Olivia Wilde was born to be a director and her direction and script oozes with the confidence and mastery of someone that has been directing for ten plus years, its brilliant. I can’t wait for everyone to see this film so I can see it again, it’s that good.

Check back here tomorrow for my day 4 recap and follow me on Twitter @ryanmcquade77 for more coverage of SXSW.