Movie Review: ‘Paddleton’ may shift tones, but it earns the ability to do so 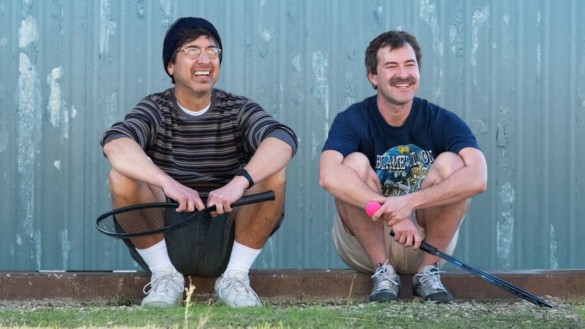 Synopsis: An unlikely friendship between two misfit neighbors becomes an unexpectedly emotional journey when the younger man is diagnosed with terminal cancer.

Sometimes when talking about movies, we say that a film is “tonally inconsistent.” Which, I guess, means that we think films should stick to one tone or another. But life is not like that. If we’re being honest with ourselves, we’ll look at life and see that tones shift and change almost at a moment’s notice. I think what we really mean is that films need to earn their shifts in tone. If a film is going to display life’s wanton curveballs, it needs to show that it’s willing to get down into the grittiness of this thing we call life.

Paddleton, a new Netflix film written by Mark Duplass and Alex Lehmann and directed by Lehmann, is a film that is more than willing to get down into life’s grittiness. At various times in the film, I laughed out loud (one such instance was a joke about the speed of ostriches). At other times, I was moved to heart-stopping sadness.

This is the story of two friends – Michael (Duplass) and Andy (Ray Romano). Andy lives in the apartment directly above Michael. Their friendship has rules that govern it. They eat together, they say hello each morning as they both go to work, they say goodnight each night after watching kung-fu movies, and they play paddleton together. Paddleton – the game of their own making – is where they hit a ball off a rundown drive-in theater screen and attempt to get the ball to bounce into an old oil drum. But we learn all of this after the film’s inciting action which takes place in the very first moments we see on screen.

That is when Michael is informed that he has what seems to be terminal cancer. He is referred to an oncologist – the “cancer one” – to be sure. After getting a second opinion, the diagnosis is confirmed. This sets off the film’s tonal balancing act. At all times, we know Michael is nearing death, yet this endearingly-lovable friendship pushes through.

Romano and Duplass make the perfect pairing for a film such as this. They trade mumbled phrases and hilarious musings about the world around them. Their performances bolster the film, especially considering that they are the only ones on screen for most of the film’s runtime.

The story really takes shape once Michael makes a decision about his course of treatment for the cancer. To see this through, he and Andy must take a road trip to procure the medicine he needs. As you might imagine, this road trip offers ample opportunities for laughs, but it brings the characters to the ultimatum that they’ve been putting off.

If it seems as if I’m treading lightly around the plot, there’s a reason. That reason is best left unsaid to allow the viewer the opportunity to engage with the film the way it wants to be viewed. But there’s a reason I started this review the way I did. This story runs the tonal gamut, and I would imagine that phrases like “tonal balancing act” will make their way into many a review of the film. But, again, I think that is true to life. The story must earn its ability to tell that slice-of-life story, and I think this film does that.

Without giving away spoilers, I will say that I’m not quite settled on how the film chooses to end. I’ll grant that it gives one of the characters the release that is needed. And the ending is true to life too, in its own way. Still, it felt like a departure from the type of storytelling the film had set up prior to that, but this is surely a minor quibble.

All in all, I think this is a fine film. It is sad, but it has its moments of happiness too. It is funny, but it has its dry moments at the same time. It’s a story about lives – how they join together and how they end. In the hands of artists like Duplass, Romano, and Lehmann, it’s a story well-told.