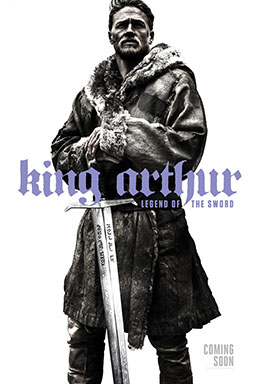 For the better part of two years now, there’s been growing buzz about Guy Ritchie’s ambitious plan to launch a six-film franchise delving into Arthurian legend. But beyond the pure scope of the project and the cast of the first film, we’ve known very little about what Ritchie had in mind. But an exhilarating trailer dropped at Comic-Con this summer, and it gave us our first real look at King Arthur: Legend Of The Sword, the series’ first film that’s set to premiere in March. Here we’ll comment on a few observations from that trailer.

It’s All About The Visuals

Sure, the cast is exciting and most any King Arthur-related story makes for a compelling narrative. But it’s hard to watch that trailer and come away with any impression other than that Ritchie is looking to emphasize visual wonder in a big way. He plays with camera angles (the opening shots look as if they may have been filmed on GoPros), has nymph-like creatures blending in with trees, and shows off breathtaking scenes of English countryside and medieval castles. Everything, from the shade of the sky to the glinting metal on knightly costumes, looks gorgeous.

There Is No Idyllic Camelot Here

A page full of interactive bingo rooms at Gala’s online bingo gaming site includes a game that’s simply called “Castle.” Essentially an online bingo hall, the game depicts a picturesque animated castle on a hill, complete with high turrets, red cone-shaped rooftops and waving flags. But why are we mentioning this? Because it’s just about the only idyllic interpretation of a castle you can find in modern entertainment. Think about it: on Game Of Thrones castles are dark, partially ruined, and flawed; in Antoine Fuqua’s King Arthur film they were minor outposts, and Camelot didn’t exist; even in fantasies like Snow White And The Huntsman, castles are foreboding, not welcoming. And it looks as if Guy Ritchie will continue this trend. While the glimpses of castles in this trailer are pretty magnificent, they’re far from the stuff of storybooks or fairy tales, which likely speaks to a grittier take on Arthurian legend.

Is This A Full-On Fantasy Film?

Antoine Fuqua came about as close as anyone could to turning the King Arthur legend into a real-life period piece, given that it is in fact a legend. His 2004 film presented Arthur as a sort of Roman general defending a remote outpost of the Empire. But generally speaking, no Arthur story is a real period piece, and because of this it appears Guy Ritchie has seen fit to infuse his medieval world with a strong does of fantasy. As a similar recap of the trailer by Inverse put it half-sarcastically, the film appears as if it might take place in Tolkien’s Middle Earth, given the presence of massive (we’re talking mansion-sized) elephant beasts and the aforementioned tree nymphs. Then again, it’s worth noting that when we see some of these things in the trailer, we’ve just heard Arthur state that he’d been dreaming. It remains to be seen if the fantasy beasts actually appear in the film, o
r simply in Arthur’s head.

This Arthur Is Every Sassy Badass

The Inverse write-up compares Charlie Hunnam’s interpretation of King Arthur to Tyler Durden, suggesting that this is basically a medieval Fight Club. Indeed, there are plenty of shots of hard-nosed, bareknuckle street brawling that give pre-pulling-the-sword-from-the-stone Arthur an intriguing new look. But there are shades of other famous characters in this Arthur as well. His coolness under pressure is reminiscent of Daniel Craig’s James Bond. His sassiness under interrogation is almost Will Hunting-esque. His costuming and swagger call to mind a medieval Xander Cage. Granted this is all coming from a three-minute trailer, but it all says a lot about a new brand of Arthur.

It’s All About Arthur

The cast is full of big names, with the likes of Jude Law and Eric Bana headlining, and well-liked supporting actors Djimon Hounsou, Michael McElhatton, and Aidan Gillen have roles as well. Even David Beckham reportedly has a small part. But with the exception of Sir Bedivere (Hounsou), none of Arthur’s famous knights seems to be a part of this first adventure. They’re being saved for future films, which, as we can further interpret from the trailer, means this is a sort of origin story: how Arthur went from street fighter to (presumably) king.

All in all this is a pretty crazy trailer, and one that’s going to continue to build excitement about Ritchie’s ambitious project heading into 2017. And yet at the same time, it’s fair to say that even with nearly three minutes of footage, we have no idea what’s coming.