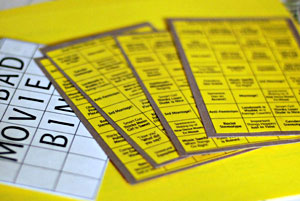 Alright, let’s face it, there are some movies that you can just tell will be bad, even before they get released. Whether it’s a movie based off of a horrible book, or or the 15th installment in a bad series, or a movie that says it’s sci-fi but isn’t actually based on science, there are some premises that are bound to be nothing but funny. These movies, we usually can’t take seriously, but we watch them anyway for the sake of posterity. We just sit there and grit our teeth for over an hour, but what if we could make watching bad movies fun with a bingo game?

The game is called Bad Movie Bingo, and it was designed specifically to help you get through that bad movie without losing your mind. After all, let’s face it; we already have fun nitpicking movies for their awful elements – why not turn it all into a competition? Bingo and movies don’t always go hand in hand, and while Vanity Fair has created an Oscars Bingo game that anyone watching the ceremony can play to help ease the boredom, and Gala Bingo’s Welcome Bonus comes with a free cinema ticket, a timeless pastime like watching movies hardly ever crosses paths with a dated game like bingo. Pete Bejarano and Lee Meredith, however, have created a bingo game that can be played with just about any movie ever conceptualized.

Here’s how it works: you pay for the game and get the PDF kit emailed to you, with instructions on how to build the kit. You print out the cards, hand them out to everyone watching the movie, and sit down and get started. Each time any of the elements on the card appears in the film you’re watching, you mark it off, and the first person to get a BINGO! pattern wins the game. What can you win? Prizes depend on you, but we’d go with giving the person the privilege of choosing the next bad movie to watch.