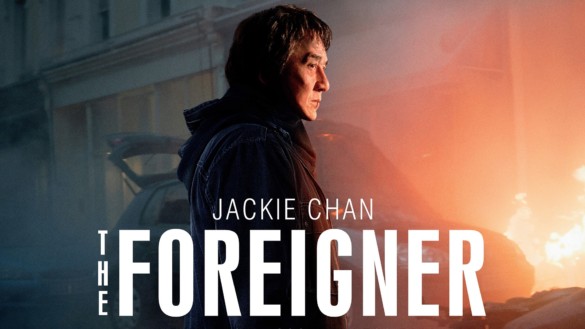 Jackie Chan has always been an endearing presence in cinema and someone I’ve always enjoyed throughout the years. Admittedly, there’s much of his filmography I still have yet to see though. Despite that, any time a new Chan movie comes to town, I’m interested to see what he has up his sleeve. This time with The Foreigner, he is moving away from the action-comedy vehicle and is instead jump-kicking his way back into something more dramatic, which looks quite enticing in the trailers.

One aspect to The Foreigner that intrigues me, is how this film pairs Chan with Pierce Brosnan. Now, I’m not sure if that’s more odd than the Chan/Owen Wilson pairing, but it’s still a bizarre combination. However, if the trailers are any indication, it seems appropriate given the film’s context of location and plot. I’m genuinely excited to see how those two work together as the mystery unfolds itself.

This story also seems to be in the right hands. Martin Campbell doesn’t have a resume that will blow you away, but he’s rebooted the James Bond franchise twice with amazing success, especially Casino Royale. He also directed The Mask of Zoro and Edge of Darkness, two films I enjoyed as well. And I can forgive Green Lantern as he was more of a director-for-hire on that film. Overall Campbell does do drama and action well, which gives me confidence that The Foreigner will be well directed and paced correctly. This film may not blow you away visually, but I do anticipate it being a satisfying theater experience.

Additionally to Chan and Brosnan, I’m also excited to see Katie Leung back on the big screen. Up until 2017, she was literally in nothing else except the Harry Potter films where she played Cho Chang. She wasn’t asked to do much in those film, but I still found her charming and effective. Since 2011, she’s had some TV gigs that I haven’t seen and hasn’t appeared in any other films. That is, until T2 Trainspotting earlier this year where she had a very minor role as a nurse. If you’re not familiar with The Foreigner, I don’t want to spoil anything, but I’ll just say that Leung’s role in The Foreigner could also be limited in a way. Even if just a small part, I look forward to seeing her on screen again.

Lastly, I’ll quickly add that I’m curious as to what Chan will bring to this film in terms of action. To be fair, I haven’t seen him do stunt work in awhile, so I could be way off base here. I missed Police Story: Lockdown, Dragon Blade and Railroad Tigers the last few years and he could have demonstrated his same-ole technical prowess in those films that he’s always displayed. But given Chan’s age, I question how the action has changed for him, if it’s changed at all. If you’re more familiar with Chan in recent years, please feel free to enlighten me. In recent interviews he’s talked about how he’s an actor who can do stunt work, rather than the other way around. Perhaps The Foreigner will purposefully restrain the stunts to allow his dramatic chops to drop-kick instead.

At any rate, I’m really excited for The Foreigner. Are you?