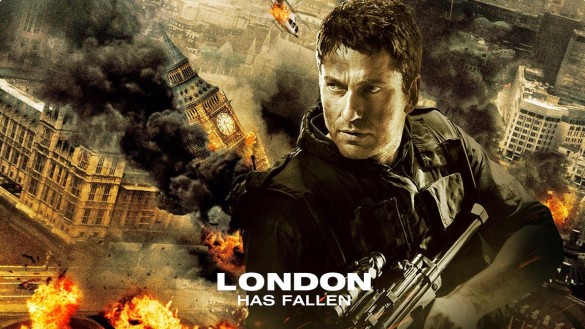 Alright, so this weekend’s show should be fun. I know Zootopia is getting rave reviews, and we’ll discuss it on next week’s Extra Film, but I couldn’t pass up the opportunity to talk about London Has Fallen for this week’s main show. If you go alllllll the way back to Episode 6 of the InSession Film Podcast (which feels like a lifetime ago), we reviewed Olympus Has Fallen and it was quite the conversation. As a quick side note, if you listen to that show, you’ll have to forgive us as we were still figuring out this whole podcasting thing.

Okay back to it. On that show I went off on Olympus Has Fallen as being absurd, cheesy and even coming off as offensive. I know some people viewed it as dumb fun, and that’s fair, but for me it’s too over the top and it actively stuck a middle finger in my face the whole time. I couldn’t forgive it. In fact, it made my worst film of 2013. As much as I liked Gerard Butler, you can’t have a SINGLE C-130 attack the White House by itself and be forgivable, unless other context was provided. But it wasn’t. Yes, you always have to suspend disbelief with films like this but Olympus insulted my intelligence and it felt rather lazy. The special effects were something from 1995 and the script was written with a tone that took itself way too seriously. It basically ripped Die Hard and managed to make our military look incompetent on the level of M. Night Shyamalan directing The Last Airbender.

All that to say, I’m genuinely excited for London Has Fallen. While I hated Olympus, it sparked some really fun conversation on our show and with friends on Twitter. And I’m hoping for the same thing here with London. I’m not looking or wanting specifically to crap on the film or come off as crass, I simply enjoy the discussion and hope for more of it.

So, what about you? Are you excited for London Has Fallen?