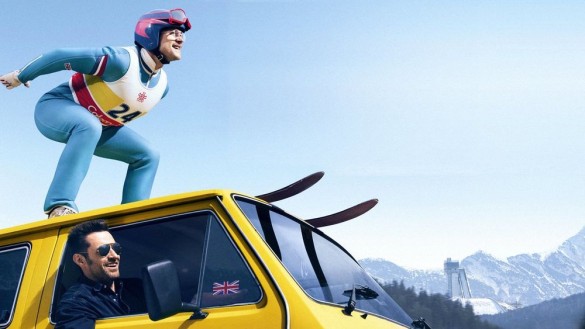 Synopsis: The story of Eddie Edwards, the notoriously tenacious British underdog ski jumper who charmed the world at the 1988 Winter Olympics.

In my review of Race, I started off by saying that the story of Jesse Owens is rich and full of such potential, that it was begging to be on the big screen, especially due to it’s cultural relevancy at the moment. The story of Eddie Edwards I’d put in that same camp. It may not have the cultural “importance” that Race depicted but Eddie the Eagle is perfect for those who need an uplifting and inspiring story about an underdog who represents exactly what the Olympics are all about.

The film opens with Eddie (Taron Egerton) as a little kid who has big aspirations of being an olympic athlete one day. However, he’s hindered by physical ailments with knee problems and needs support just to get around. That doesn’t stop Eddie though who begins to “train” himself until he’s old enough to take up skiing, a sport he chooses after the epiphany that he’ll have a bigger chance of realizing his Olympic dreams through the Winter Olympics. After a small fallout in downslope skiing, Eddie turns his eye toward ski jumping and moves to Germany to train. There he meets former USA Olympian, Bronson Peary (Hugh Jackman), who isn’t interested in Eddie at first until Peary notices that Eddie will continue to jump, even if it kills him. From there, the two go on an endearing journey of bonding, training and proving some people wrong.

As a film, Eddie the Eagle is pretty messy. The pacing is disjointed, it’s rather tacky in spots and the film stifles most thematic depth with fickle jokes or unnecessary gags that halt any momentum it builds. That said, I’m not convinced the film was really going for anything but inspiring fun. Dexter Fletcher is more concerned with being goofy and giving his characters flair that make them so damn lovable. Sure, the screenplay throws in some drama between Eddie and Bronson where you’d expect but for the most part, the story is straight forward and everything you’ve seen before. It has all the coaching cliche’s, stirring speeches and athletic courage you would want to see in a film like this. But it’s how Fletcher plays with the material that engages you.

Fletcher does a great job of letting Egerton and Jackman play with their characters, especially during the bigger scenes and it’s entertaining throughout. In one moment, Jackman’s Peary describes a metaphor that ski jumping is like making love to your favorite actress (or actor) and he certainly depicts what that would be like for him. It’s an awkward scene but it has a hilarious payoff during the film’s, ahem, climax. In another scene, Egerton’s Eddie is seduced by a bar owner who isn’t afraid to let him know that she wouldn’t mind hanging out with him in the closet, if you catch my drift. Both of these scenes can be seen as coarse and perhaps a bit uncouth but it all plays into the directors hands at attempting to have fun with the material, while still treating it seriously enough. Fletcher isn’t mocking Edwards’ story or Edwards himself but rather honoring him with a playful approach. The balance was just right.

I can’t leave you without mentioning the score by Matthew Margeson, which is utterly perfect. The melodies are upbeat and have a slight 80’s vibe that helps engulf you in the aesthetics of the film. It’s quite beautiful and help enhance the sense of fun this film was going for. And overall, while the film is an easy target to pick apart critically due to it’s problems, it’s still a very good piece of entertainment. It’s inspiring and wonderfully shows how Eddie Edwards is the quintessential underdog. He was in it for the love of sport. It was what he had to overcome that gave him conviction. Simply, Eddie soars here with heart and fun humor.