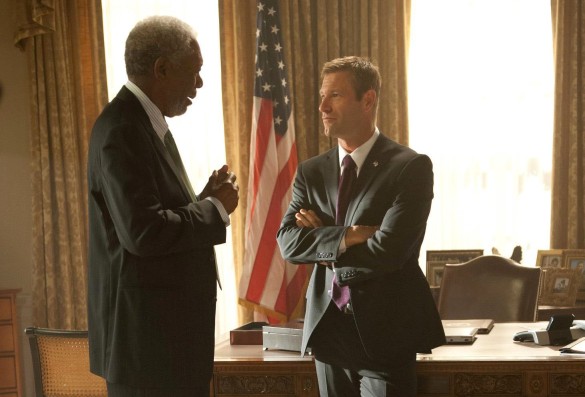 Synopsis: Disgraced former Presidential guard Mike Banning finds himself trapped inside the White House in the wake of a terrorist attack; using his inside knowledge, Banning works with national security to rescue the President from his kidnappers.

DIRECTION
I expect a lot more out of Antoine Fuqua than what we got for this film. The movie starts off strong, but once the enemy invasion begins, it all goes down hill. This is sort of a spoiler, but if you’ve seen the previews it’s not a surprise. But the one (Yes, just one) C-130 that is used in the invasion, destroys two F-22’s, kills everyone on the ground, and creates all kinds of chaos and it’s a joke. I understand it’s a movie and Hollywood threw out realism a long time ago, but this was way over the top. To me, it was offensive to U.S. military personnel and made them out to be completely incompetent. The film is basically the script of Die Hard, that has the theme of Modern Warfare 2, and tries to have the feel of Pearl Harbor. It fails at all three and is way too serious for the action move that it is. The visuals and sound editing are embarrassingly bad. Fuqua does get good performances out of his lead actors while the supporting cast is so-so. The one thing he does get right though is the score. There was also some good action once they were inside the White House. If you can get passed this ridiculous premise, it’s a little enjoyable. I had a hard time with it though. It may not be all Fuqua’s fault though because it seems like all of the budget went toward getting high profile name actors and to an aggressive marketing campaign. That being said, it’s one of the worse Fuqua movies I’ve seen.

SCRIPT
The script for this movie is also week. The writers, Creighton Rothenberger and Katrin Benedikt, have no other experience writing scripts and this is their first shot at Hollywood. While, some of it’s okay, it’s a big knockoff of Die Hard in lots of ways. I think on the surface the script had some good moments, but they weren’t executed well which left it really dry. Some of the script was also ruined by the poor direction of Fuqua and a small visual effects budget. Most of the dialouge was pretty good. There were some good one liners, in particular with Gerard Butler’s character that I really enjoyed. As I mentioned, it’s hard for me to get pass the ridiculous premise though. If the script was more geared like Modern Warfare 2, it would of been a lot more plausible. I understand the chances of this happening in real life is slim to none (so please no hate mail), I get that. I’m just saying they could of been more creative to make it more life like. I feel like they took a cheap way out. The love story is pointless to the whole film and doesn’t add any value. If anything, it just gets in the way of the story, which I feel is hard to do. Nothing about the script is very original and that’s what hurts it more than anything.

PERFORMANCES
Gerard Butler, Morgan Freeman, and Aaron Eckhart are pretty good. I especially enjoyed Eckhart as I think he’s getting better and better with each role I see him in. Morgan Freeman is in this movie. I think that’s all I really need to say. Butler is also good. I think he’s great as the action hero. While people tend to downplay his romantic comedies, I tend think he’s great in those as well. P.S. I Love You is my favorite chick-flick of all time. The big three make it worth it to see this film. I also enjoyed Rick Yune as the main villian though. He does a great job and pulls off the role great. The supporting cast is okay. Most of it is forgettable, except for Ashley Judd. She should of been in it more.

SCORE
Trevor Morris kills the score for this film. It’s easily my favorite part and he does a great job. The patriotic themes he has are great. I love how he fills the action scenes and trys to lift up the scenes where I think they are weak. The orchestra is used great and I especially love the horns. This is a great listen to outside of the movie and I think it’s done great. It may be a little bit too thematic and serious for what I think is a typical, silly action movie. Outside of that, it’s good.