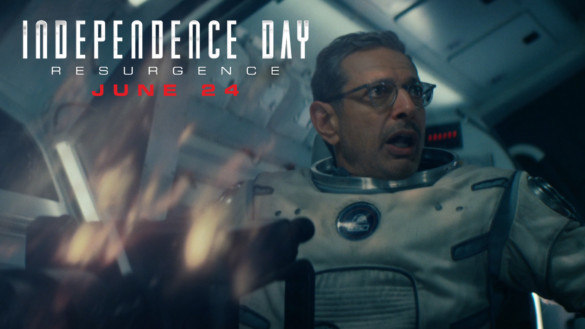 We had twenty years to prepare for this…so did they. I’m not sure why, but the marketing for Independence Day: Resurgence has been a lot of fun, despite its absurdity. It’s more than just the poster tagline too, the trailers have been quintessential dumb fun. And if you’ve listened to our Top 3 guilty pleasures discussion, you’ll know I’m a big fan of the first Independence Day. Sure, I get that some people will argue that ID4 is objectively a good movie but I’m not sure I can go quite that far, personally. There are objectively good things in it, such as the thrilling action and hilarious humor but the overall plot is thin and it lacks the kind of character development that a truly great film would call for. Now, does any of that really matter? Not at all and it’s why it made my list for guilty pleasures (again, my criteria for that list was defined as films that are “critically flawed” or bad but a film I still love). Will Smith is another reason why the flaws of the first film do not matter. He’s incredible and he makes that first Independence Day what it is in the end, which is why it’s disappointing he’s not back for Resurgence. It’s even more sad when you see that literally everyone else is back for the sequel, except for Smith. Instead, he’s busy making Focus and Concussion, two films that aren’t turning any heads. I liked Concussion for what it is, and it made some noise to its credit but overall, neither of those films are the size or had the influence Independence Day had on pop culture. Simply what I’m saying is, there’s no reason for Smith to not be in this film.

All of that said, Resurgence looks like fun and will hopefully continue this trend of films we’ve seen this summer, such as Warcraft and X-Men: Apocalypse, of being objectively flawed but still fun in the end. As of right now, I have no reason to doubt that. And not just because of the film’s marketing but also Jeff Goldblum. It’s impossible to not love Goldblum and the fact he’s back in a big summer blockbuster is reason enough to be excited for Resurgence. Plus, I fully expect Bill Pullman to give another epic speech that will echo for the ages.

Enough about me, what about you? Are you excited for Independence Day: Resurgence?

(PS, yes, I’m still on vacation. I wrote this a week ago, so if you respond to me now, it may be a few days before I get back to you.)

Here’s what else is coming out at the box office this weekend:
The Shallows
Free State of Jones
Wiener-Dog (limited)
The Neon Demon (limited)
Swiss Army Man (limited)
Hunt for the Wilderpeople (limited)