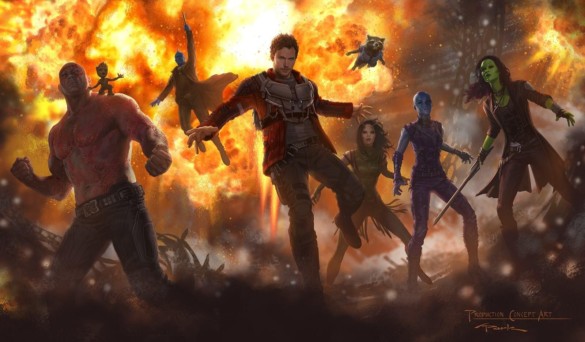 Guardians of the Galaxy was one of the biggest surprises in 2014, and one of my favorite films of that year. Going into that film, I, like many people, did not know anything about the Guardians Universe. I had heard of “Star Lord” but it was just a name that a few of my fellow nerds threw out from time to time. For the most part though, it was all new to me, which amplified the importance of the film’s marketing. And boy did they deliver on that front. The trailers for Guardians of the Galaxy were by far some of the best of 2014 and it catapulted Blue Swede’s “Hooked on a Feeling” back into the mainstream once again. They way Marvel/Disney introduced us to the world of Guardians – the music, the characters and their banter – was about as perfect as it gets for an unknown property.

And now here we are with Guardians of the Galaxy Vol 2, by far one of my most anticipated films of the summer season. The trailers have been equally as impressive, this time launching Sweet’s “Fox on the Run” back in to the mainstream. But more than that, the character dynamic that elevated Vol 1, looks to be just as fun in Vol 2. Drax in particular looks like he may be my favorite thing about Vol 2. That whole bit at the end of the first trailer where yells at Star Lord for being embarrassed nearly knocked me out of my chair when watching that for the firs time. So hysterical. But every interaction he has in the trailers looks great to me. On top of that, you have Rocket and baby Groot, who is going to sell A LOT of toys this summer. Star Lord appears to be doing more “Star Lord” things, which we all know is great in the hands of Chris Pratt. Of course, the job of marketing is to make a film look good, and maybe that’s all this is, but the trailers have sold me big time.

Additionally to that, Vol 2 welcomes the likes of Kurt Russell and Sylvester Stallone. I repeat – Kurt Russell and Sly Stallone – are going to be in a Marvel film. That’s incredible. I’m not sure how they pulled that off, but I’m excited, even if they have limited bit roles. Or maybe they don’t? I really have no idea, but either way I can’t wait to find out.

I’m also curious to see more of Michael Rooker as Yondu in Vol 2. He was great in the first Guardians, but I’ve heard through the grapevine that he has more to do here, and that he knocks it out of the park. We’ve talked about on the show how Marvel has done a great job with its casting, and Rooker as Yondu ranks near the top for me. He was perfect for this role.

Guardians of the Galaxy Vol 2 kicks off the 2017 summer movie season, and by all accounts, it seems to be setting the bar pretty high. I can’t say I’m too surprised, and especially after last summer’s mediocre outcome, I’m hoping for something refreshing this year.

Here’s to a great summer movie season this year!

Nothing wide – because other studios are smart.
This Is Not What I Expected (limited)
Chuck (limited)
Enter the Warriors Gate (limited)
The Lovers (limited)

While we look forward to Guardians Vol 2 this weekend, don’t miss Episode 219 where we discuss The Circle and our Top 3 Jonathan Demme films!

Also – our Ep. 219 Bonus Content where discuss THE LOST CITY OF Z!