Movie Review: Their Finest features great performances that make for a fine film 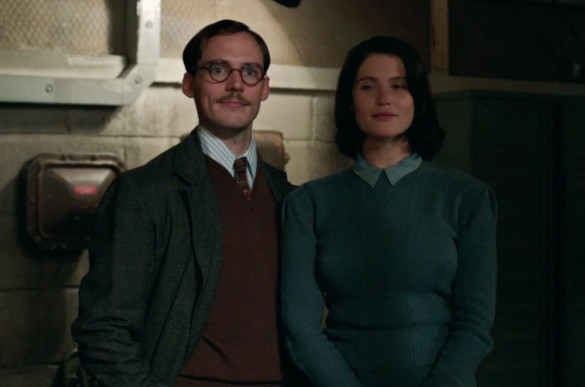 Synopsis: A former secretary, newly appointed as a scriptwriter for propaganda films, joins the cast and crew of a major production while the Blitz rages around them.

Their Finest is a war-time drama about Welsh journalist Catrin Cole, winningly played by Gemma Arterton, who gets seconded to the Ministry of Information film department to write the ‘slop’, or women’s dialogue for the much-derided ‘informationals’ that made up part of a trip to the cinema in 1940. Once there she deals with standard establishment bigotry from likes of Richard E Grant and Jeremy Irons but shows her talent enough to be recommended by Sam Caflin’s Tom Buckley to help out on a possible feature film about two sisters who stole their father’s boat and rescued soldiers from Dunkirk.

Once this film within a film starts, we meet Bill Nighy as Ambrose Hilliard, a gradiose actor past his prime actor who thinks he’s tthirty years old and still awesome. The film makers then have to deal with propaganda demands from the ministry of war (add in a genuine American airman, who naturally cannot act), a constantly shifting script, complicated actors as well as the stresses and strains of life during the war years, and the challenges of finding and holding on to love during the particular challenges of the Blitz.

On the whole I found this film entertaining, but a little uneven. It was frequently quite funny, then sad, then hopeful, then bittersweet, then funny again, which makes it very hard to pigeonhole into a single genre. It is slightly romantic, it is gently comedic, but it is also hard edged and, in places, quite brutal. It is also unable to wholly avoid cliche, which is a bit of a shame.

However, the performances are, uniformly, fantastic. Gemma Arterton combines sweetness and steel in a measured, nuanced performance that is utterly winning. Catrin comes across at times a naive, even downtrodden, but also strong and bloody-minded. She’s a complex, fully rouded character and Arterton delivers her with skill. Likewise Sam Caflin is superb as the ascerbic, sexist even cruel co-screenwriter Tom Buckley. The man is a hard-to-pin down character who is frequently utterly horrible, but Caflin’s performance enables us to find a damaged, even likeable man within the outwardly hideous character without the script needing to telegraph his innate decency. It’s an extremely tricky role, and Caflin pulls it off admirably. Bill Nighy too could have simply cruised through his role, seeing as it effectively just requires him to be the Bill Nighy role he’s performed for years now, but the actor brings more to well crafted character, allowing him to be more than just the light relief. In a film of subtleties, Nighy’s ever so gentle romance with Helen McCrory, and his understated ‘bromance’ with Eddie Marsden’s agent (both supporting roles expertly performed) is amongst the most subtle.

The script, by Gaby Chiappe, delivers these fine actors with plenty of well-wrought lines and subtle characterization, though I do wonder if it would have been better served with a bit more time, despite this being quite a long film. We do sometimes lurch from horror to banality, though it never loses sight of the deprivations of wartime. Sometimes the incongruity of the daily routine is brutally disrupted by the destructive, deadly bombing of the German Blitz. Other times the day-to-day ho-hum routine of sheltering, working and even loving whilst at any moment a bomb could explode and end your life, is beautifully drawn. It just occasionally feels a bit rushed, or a bit ‘paint by numbers.’ One wonders with a bit more running time if these various elements could have been blended together a bit more evenly.

However this is nitpicking. Ione Scherfig, the director, has delivered a fine film, balancing the horrors of wartime, the struggles of women to be accepted in a man’s world where most of the men are elsewhere, and a fine examination of the craft of 1940’s film-making.

By the end of the film, when despite of all the problems that have beset the production and our heroes, we see cinema audiences reacting to the fruits of their labors, you have to posses a hard heart not to feel lifted. It’s a fine film about women shaking off the shackles of the pre-war bigotry, rising to the challenge of the world, and succeeding.

As Bill Nighy’s Ambrose Hilliard says at one point “we only get these opportunities because young men are fighting, and dying, elsewhere.” This is a film about opportunities and when to seize them. It is not a comedy, not a laugh riot, and it is being misrepresented by the advertising. It is, however, a well made, very well acted, wartime drama. And, if you are in the mood for this kind of film, you would do well to look it out.