Movie Review: Guardians of the Galaxy Vol 2 is as good as advertised 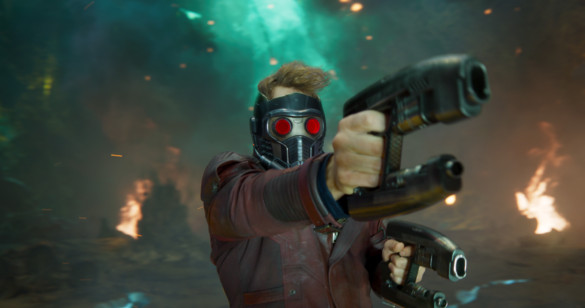 Synopsis: Set to the backdrop of Awesome Mixtape #2, ‘Guardians of the Galaxy Vol. 2’ continues the team’s adventures as they unravel the mystery of Peter Quill’s true parentage.

Rest easy gentle reader, for I wish to tell you a story. If you feel the need for some cocoa, go ahead, I can wait. It is 1999, it’s 11th of June, and this 20-something nerd is stupidly excited. Like bouncing off the walls excited. The reason for his excitement is easy to spot. In a week, *just a week*, the first new Star Wars film in twenty years is released and it looks good. There a skinless C3PO, a kid who has his own racing landspeeder thing, some cool looking CGI aliens, lightsabers. Oh this cannot possibly fail.

So I’m excited. Everyone in our shared nerd house in the arse-end of Wiltshire is excited. Pub conversation has been Star Wars focussed for a while now. My flatmate Lori suggested we go to the movies just a week before George Lucas’ newest opus hit the multiplex. What idiot is releasing a film that’s just going to disappear in a whole load of force-related hype?
“Who’s in it?” I ask.
“Keanu Reeves.”
“Is he still a thing?”
“Apparently.”
“What’s this film?”
“It’s a sci-fi thing. I reckon it’s worth a punt.” she said, wisely. Fair enough, I thought, and off we went.

The screen goes dark. A phone rings. Green numbers cascade from the top of the screen, then we plunge though one of the zeros and we’re in a rainy, almost fifties era city. Police are chasing someone, they kick open a door and there’s a woman, dressed in in plastic, standing by a pay-phone, the police raise their guns…

The woman leaps into the air…
… and hangs there…
… as the camera spins, impossibly, around her …
… and I’m sold.

That film was The Matrix, the Wachowski brothers’ ground-breaking sci-fi spectacle that came from nowhere (the pair had only made the good-but-hardly-a-hit lesbian thriller Bound previously) and broke the mould. No-one had ever seen anything like The Matrix before.

Going into a cinema with no real idea what you are going to see is a rare experience. Nowadays films seem intent of giving away everything in the trailer, or the hype is so detailed that the film sounds rubbish and you’re not going to see it anyway.

The first Guardians of the Galaxy film was a similar experience. Here was a wacky sounding premise from Marvel: a sci-fi space opera with no known characters, no links to the established Marvel Cinematic Universe and contained a character who was a talking tree with limited vocabulary.

There was no real need to worry, the first Guardians was a highly imaginative, colorful, lively, fresh and funny movie with a robust rolling plot, instantly lovable characters, quotable dialog and, get this, it was fun. Seriously fun.

Guardians of the Galaxy Vol 2 is, guess what, the first sequel to the film that introduced us to Peter ‘Starlord’ Quill, Gamora, Drax, Rocket Racoon and Groot and it has a lot to live up to. No matter that all the cast returned, along with writer/director James Gunn, there was always the worry that the first film was a fluke, a one-off never to be repeated. The oft-mentioned threat of rolling this free-spirited franchise into the wider MCU also raised eyebrows (and concerns).

Therefore I am happy to say that Guardians 2 (as literally no-one is calling it) is a worthy sequel to the original film. It is a slick, funny, colorful intergalactic romp that is resolutely like nothing else in the MCU and is just as good as the original. Though not hugely different from the first, who cares when a film is this much fun.

The story of Vol 2 (any better?) sees our heroes battling a inter-dimensional space beast on behalf of Elizabeth Debecki’s race of beautiful gold beings called The Sovereign. One swift double-cross later and a mighty space battle ensues causing our characters to crash on a remote planet where they are finally tracked down by Kurt Russell’s Ego. An ancient god-like living planet who just happens to be Quill’s long lost father.

One of the signature joys of a Guardians film are the snap scenes, scenes that don’t really advance the plot, but provide character moments that are sometimes sweet, sometimes caustic, but nearly always very funny. Other snap scenes are simply extremely stupid – at one point Yondo and Rocket perform multiple hyperspace jumps which wreak havoc on their physiology. A joke so silly that visiting it twice is only natural.

Performances are all excellent, with an particular nod to Kurt Russell as Ego, whose performance is subtle and well delivered, even when he is reduced to CGI for the inevitable climax, and Elizabeth Debecki who, despite being drowned in unflattering gold paint, delivers a performance of frustrated rage and despair hidden under a shell of calm control. See her performance in “the-scene-where-the-carpet-runs-out” for an example.

Visually the film never quite delivers some of the gob-smacking spectacles of the first – there is nothing that quite compares to “Nowhere” in the first film for example. However it is still a luch colorful look at space that is always attractive to look at.

There are other problems, the last 10-15 minutes descends into the CGI slug-fest that marrs so many of these films and swiftly becomes tiresome. Also the whole film differs from the first by not visiting any of the characters and locations we visited in the first film, there’s none of the Novacorp that set up much fun in the first film. The film is, in my opinion, weaker for not having our ragamuffin heroes dropped into and frustrating an icily organised and civilised society, and the Sovereign don’t quite cut it.

However these are minor quibbles. This is a film packed to the rafters with character, comedy bickering, whip-crack dialogue, stupid visual jokes, clever character moments, joyous action and a desperately cute baby tree.

Perhaps the real problem with GotGv2 (nope, there is no shorthand that’s going to work) is that is no longer a surprise, it is no longer that exciting new thing. The flaws of the first film, a weak villain, unclear plotting and over the top CGI climax, are still present here. If anything the plot is a little worse than the original. To beat this James Gunn turns everything up to eleven and, you know what, it works.

It’s a fantastic film, one of the year’s best, and it comes highly recommended. But be warned if you have not seen the first film, you may be a little lost.

Hear our podcast review on Episode 220: