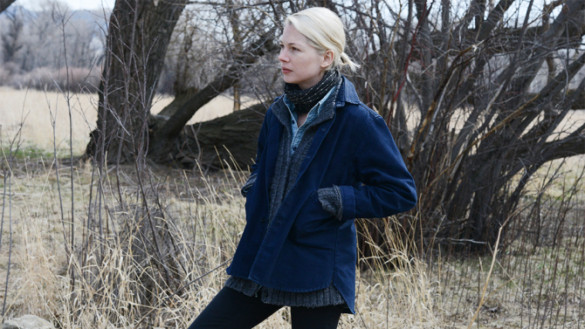 This weekend on Episode 193, we are going to be discussing Kelly Reichardt’s new film, Certain Women, starring Kristen Stewart, Michelle Williams and Laura Dern. As mentioned on this week’s poll post, Reichardt is a director that you should be familiar with if you’re not already. I’m on record of saying that Meek’s Cutoff is the Oregon Trail movie that I’ve always wanted. It’s incredible and it made my Top 10 from 2011. Similarly, Wendy and Lucy is a wonderful and heartbreaking film about freedom, desperation and coping with life. 2008 is the next year in our year-by-year retrospective series and I have no problem spoiling that Wendy and Lucy will be in my Top 10. Reichardt’s 2006 film Old Joy is also really good and probably has a great shot of making my Top 20 for that year. In 2013, I enjoyed Night Moves but overall it’s a small step down from the films mentioned above. It’s still a solid effort that is beautifully shot. Her first two films are the only movies I need to see at this point, but from what I’ve seen, she’s easily one of the best female directors working today.

All of that said, it’s probably not a surprise to hear that Certain Women made my Top 5 most anticipated films coming out this fall. Additionally to Reichardt, the film stars my girl Kristen Stewart. Her career post-Twilight has been absolutely amazing. Stewart’s on-screen presence should mix very well with Reichardt’s shooting style. On top of that, this film also stars Michelle Williams, who has been Reichardt’s muse on a few occasions. Williams’ heartbreaking performance in Wendy and Lucy made that film’s pathos really resonate. The same thing can be said for what she brought to Meek’s Cutoff. Williams wasn’t in Night Moves a few years ago, so it’s nice to see her re-connecting with Reichardt. And how can you not love Laura Dern? She’s always a treat as well.

The premise of Certain Women is intriguing to me and it’s a very Reichardt narrative. It’s about the lives of three women who intersect in a small town, which leads to some compelling conflict. Reichardt doesn’t need much to make something beautiful. She is able to capture small-scale very well, focusing on rich characterization and story. It’s her simplicity that shines in her movies. However, don’t confuse simplicity with plainness. There are complexities to her characters but there’s a simple elegance that keeps her films real and attainable. As a result, the experiences Reichardt conjures are visceral and thematically potent. I expect nothing less in Certain Women, especially with these three actresses and what they bring to the table.

All in all, I cannot wait. Are you excited for Certain Women?