Featured: And The Production Kept Sinking On 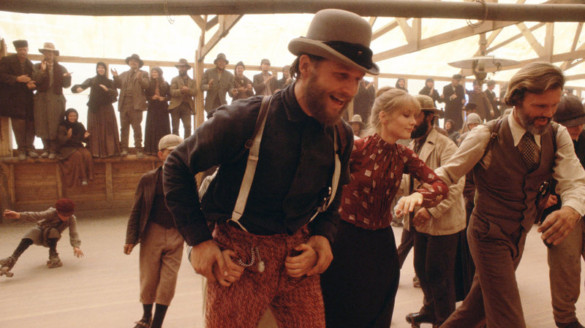 It is the 40th anniversary of Francis Ford Coppola’s Vietnam War epic, Apocalypse Now, which won the Cannes Film Festival’s Palme d’Or despite being not completely finished. It had already gained infamy before due to its lengthy production, overblown budget, and stories of madness and near-death on the set. A five-month shoot became fourteen months; Coppola replaced Harvey Keitel with Martin Sheen after just one week, a massive typhoon destroyed the sets and put the film six-plus weeks behind schedule and $2 million over budget, Martin Sheen survived a heart attack that took him out for a month, the post-production ran on for another two years and Coppola suffered a nervous breakdown in between the entire fiasco. In its massive success, Coppola said, “We were in the jungle, there were too many of us, we had access to too much money, too much equipment and little by little, we went insane.”

While the film resulted in a happy ending for all, other infamous productions went south and never came back to the surface.

Michael Cimino got carte blanch after his sweeping success with The Deer Hunter. His original epic script was given $11.6 million, a big budget for the time, but ended with a bill of $44 million. Instead of being shot from April to July for a release in December 1979, principal photography ended in March 1980. Cimino shot more than 1.3 million feet (or 220 hours) of footage and his obsession with perfectionism resulted in an average of 50 takes for every scene. It even carried over to post-production where he resisted getting fired by locking himself and the film in the editing room. From 5.5 hours to a final 3.5 hours, the film was badly whipped with a box office of $3.5 million, ending his Camino’s career and bankrupted United Artists. But the film did get its reanalysis and Cimino, right before his death, got the credit he sought as many came to realize it as a genuinely dynamic epic Western. It even got its re-release on Criterion.

Elizabeth Taylor and Richard Harris began their notorious love affair nearly die out like the characters in real life. A budget of $5 million finished with $44 million, or $360 million in today’s terms. Director Joseph L. Mankiewicz (All About Eve) was a mid-production hire after the original director was fired and Burton along with Rex Harrison was replacements when Taylor was hospitalized for many weeks in 1961. The affair was publicized across the globe because they were both married and newspapers zeroed in on the tumultuous filming, which was relocated to Rome from London. 20th Century Fox was so invested they canceled other productions just to fund Cleopatra and the studio nearly went out of business anyway. Still, everything that happened created a huge buzz that the 4-hour epic was a box-office hit, won 4 Oscars and was nominated for Best Picture.

What was supposed to be a simple romantic country turned into a three-year journey with re-writes and re-shoots because of a script that was not finished when they started, four different writers being hired to complete it, Beatty’s demand to do more takes for himself (he only acted and did no producing, writing, or directing), and the actors being forced to leave to do other commitments before coming back to finish the film. Even the re-shoots took long, lasting two months instead of the allotted two weeks. It billed at $90 million and only recouped $10 million when it was finally released in 2001. And more notably, Beatty was not on the screen for 15 years until his pet project, Rules Don’t Apply, was released.

Warren Beatty has the unfortunate reality to have been connected to two films with infamous, lengthy productions. This one is probably more legendary because it involved him, co-star Dustin Hoffman, and writer/director Elaine May. First, May’s previous film, Mikey and Nicky, had litigation over her going over budget and final cut privilege that kept her away for a full decade. When filming Ishtar, the production in Morrocco turned out to be a logistical nightmare and May could not make up her mind on what she wanted for the desert scenes. And to make things worse, Beatty and May butted heads – Beatty also served as Producer – and May also got into it with Vittorio Storaro, the DP who also worked on Apocalypse Now and on Beatty’s Reds. It staggered on to the editing room, where there was more fighting, more mediators, and a change in management at Columbia. It missed its Christmas 1986 deadline and settled for an April release; by then, the writing was on the wall for a bomb. Time hasn’t helped, but the trio defends the film as still a good movie.

Other films including Waterworld and The Cotton Club had its own production troubles and scandals that are part of Hollywood lore. Considering the repeated delays on Where’d You Go, Bernadette? and the push of the new Sonic film, there will be more troubles for other potential big-time films. They are cautionary tales for everyone to learn: have a completed script, stay within the budget, don’t get too obsessive over little details, no fighting between the director and cast, and avoid salacious stories that can be leaked out to the press.