Movie Review (TIFF 2021): ‘Burning’ is a Devastating and Crucial Documentary About the Australian Black Summer 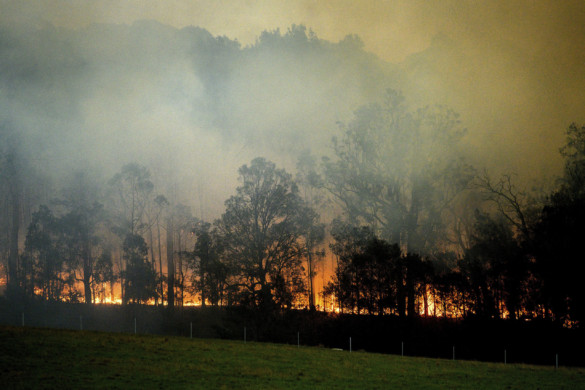 Synopsis: Looks at the deadly Australian bushfires of 2019-2020, known as ‘Black Summer’. An exploration of what happened as told from the perspective of victims of the fires, activists, and scientists.

“The greatest tragedy of this Black Summer bushfire season was that we saw it coming,” says scientist and environmentalist Tim Flannery in the opening credits of Eva Orner’s Burning, a devastating exploration of the tragedy that took the life of 34 people, killed or displaced over 3 billion animals, and burned 18.6 million hectares in Australia between June of 2019 and March of 2020.

In terms of form, the documentary is straightforward. Orner uses news and on-the-ground footage, aerial shots, and interviews with activists, scientists, civilians, and firemen to assemble the film. There’s not much creativity in terms of filmmaking, but smooth editing and passionate delivery of its message make it an engaging and highly important watch.

Burning starts by describing the general environmental conditions of Australia and the ease with which bushfires appear every year. Figures such as Tim Flannery and journalist Marian Wilkinson explain how predictable the tragedy was and the non-existent political efforts to prevent it. At the heart of the issue is Prime Minister Scott Morrison, an irrational climate denier whose infuriating attitude, actions, and responses before, during, and after the fires will make you want to punch a hole through a wall. He’s a real-life villain whose unconcerned behavior toward the whole situation is sickening. But he’s not alone as Orner shows the harmful impact of the media in spreading disinformation. These are tools effectively used to push your buttons and make you want to take action.

Of course, the biggest impact of this film lies in showing the devastation of the tragedy through footage and testimonies. And it’s harrowing. Former Fire and Rescue Commissioner Greg Mullins struggles to find words to describe the nightmare. A civilian shares terrifying footage of pitch-black skies at 9:13 AM; Mullins describes his surprise encounter with a mob of kangaroos running away from the devastation only to fall dead on the ground; Orner shows heartbreaking images and videos of dead birds, kangaroos, koalas, and many more animals. Blackened, twisted bodies fill the roads.

One of the strongest narrative elements of Burning is the brief explanation of Australia’s coal-centered identity. This creates an understanding of the country’s deep-rooted anti-sustainability rhetoric that has been manipulated by the media to push the agenda of power-hungry individuals and corporations. It’s a fascinating theme that serves its purpose, but Orner doesn’t fully exploit it, thus losing an opportunity to enrich the film.

The film opens with an acknowledgment toward the Custodians and original owners of the country. This is an immediate reminder of the reason why humanity is in such a precarious situation. It’s something touched upon by other important 2021 documentaries such as The Spokeswoman and Eatnameamet – Our Silent Struggle. Colonization changed the landscape and tried to bury Indigenous traditions and beliefs. Instead of respecting and protecting nature, extreme capitalism practices and oppression has forged a path of unbridled destruction. Orner barely addresses this idea near the end of the film. Once again, she doesn’t do nearly enough with it but does manage to create a powerful reflection.

Burning might trigger climate change anxiety. It’s infuriating and mortifying, but it’s also hopeful thanks to its portrayal of honest, passionate people working hard to create a better future. Teenage activist Daisy Jeffrey and billionaire entrepreneur Mike Cannon-Brookes offer hope on two fronts: one is shown spearheading an awareness movement supported by the younger generations, and the other proves that rich people can make a huge difference when using their resources to support environmental-friendly ideas. We might need a combination of both.

There are more fashionable and friendly films out there, but environmental-focused filmmaking is vastly needed right now, and Burning effectively serves its purpose. It lights a fire in your heart and pushes you to engage in the conversation and do something, anything to fight for the planet.