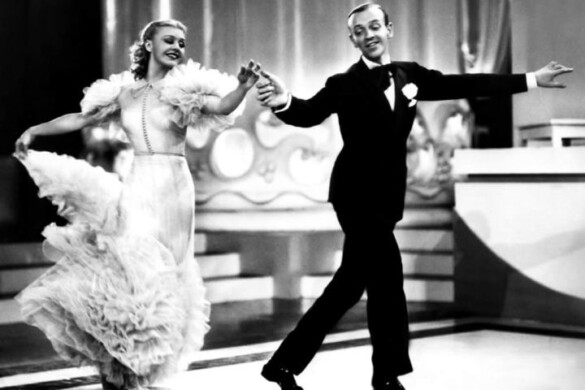 I think that you might struggle to find people who don’t understand the appeal of Fred Astaire and Ginger Rogers’s double act. Not everybody is a diehard fun and some will complain that their films seem terribly old fashioned but I’ve never encountered somebody who won’t concede that they were both extraordinarily skilled dancers. When they launch into one of their routines and that delicious clickety-clack sound can be heard, it is impossible not to be won over. Even contrarians find it hard to question Astaire’s status as one of the all time greats. Their talent and chemistry is undeniable – it explodes off of the screen. This is what allowed them to make so many films that were essentially just an excuse to stitch together a few song and dance numbers. Out of all their collaborations, Swing Time (1936) is typically viewed as their Magnum Opus. It uses the same old formula, but has the distinction of featuring some of their best dancing. This made it a box office smash in 1936, and it still has people grinning happily today.

The secrets to its success aren’t all that surprising. People like to see pretty, glamorous people hoofing like there’s no tomorrow. However, it is important to consider the fact that there is a thin plot and quite a few dialogue scenes sandwiched in between the singing and the dancing. All of this is usually just employed as a basic foundation that allows the director to get the ball rolling, before getting down to the good stuff. Swing Time is unusual in that there are lengthy intervals in which Rogers and Astaire are expected to conjure up jokes out of thin air. It keeps stopping and starting, thereby failing to build up momentum. After performing an exhilarating dance number, Astaire and Rogers will spend fifteen minutes trading mildly amusing one-liners while standing out in the snow. This means that the audience slowly begins to feel as though they will constantly be met with disappointment. Even after a scene that had me whooping in delight, I knew that the film was immediately going to get bogged down in cutesy dialogue that I didn’t care for. I suppose these lulls were meant to build up anticipation for the next dance scene and give us time to to get to know the characters. These rest periods stretched on for far too long and extended a light piece of entertainment that should have been about 70 minutes long.

The thing with these films is that they are aren’t meant to provide you with three-dimensional, well-rounded characters. In that regard, Swing Time is similar to all of the other Astaire and Rogers collaborations. In fact, one of the only ways in which it deviates from the formula is in its inclusion of the “Bojangles of Harlem” musical number. It holds the unfortunate distinction of featuring Astaire in blackface. The scene is full of offensive racial stereotypes and horrific ‘jokes’ that trade on the idea that African-Americans are inherently stupid and worthy of mockery. This is one of those moments that really has not aged well and I can’t understand why people seem so willing to sweep this moment under the rug. When you consider the fact that there are so many other Astaire-Rogers films that don’t feature racist content, it seems odd that Swing Time gets all the praise. Surely critics aren’t blind to the fact that the scene does manage to tarnish a significant portion of the film.

There are so many points where the screenwriters and the director made missteps, so it does become easy to forget the fact that Astaire and Rogers still show up and do their thing. Blackface number aside, Astaire hits most of the right notes and appears as suave and smooth as ever. There’s something hypnotic about the way that he glides and swirls around a dance floor. He really does look like he’s floating on air and doesn’t have a care in the world. He successfully creates the illusion that dancing that well could be effortless. Even though we all know that it would take weeks of effort to perfect any complicated dance routine, we want to believe that we could step out onto the dance floor and spontaneously come up with a sequence of 65 different dance moves. Astaire gives us that fantasy and looks good while doing it. Rogers succeeds in bringing spunk and passion to so much of the choreography. She doesn’t possess Astaire’s silky smooth grace and she smartly chooses to lean on the fact that she can convey so much personality through her movements. She ends up coming across as the more boisterous, vibrant dancer and holds her own without fully taking our attention away from Astaire’s precision and technique. They really do make a good pairing and, even though I happen to prefer Astaire’s work with Rita Hayworth, I can understand why fans lost their minds over Fred and Ginger.

The real issue here is that Swing Time just doesn’t stand out from the rest of the pack. When it does deviate from the formula, it presents us with racist stereotypes and slow pacing. This is just another fun dance movie. Nothing more, nothing less. This means that its enduring appeal is slightly confusing. There are better Astaire-Roger collaborations out there, so why is this the one that gets the lion’s share of the praise? The dances aren’t that good.