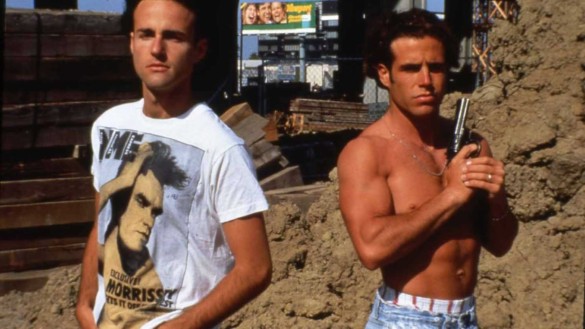 We are back with yet another of those movies on Criterion Channel that is directed by one of those directors that I keep hearing about, but never managed to check out. This particular director is most known for his involvement in the New Queer Cinema movement of the 1990’s. When I found this out, it surprised me even more that my experience with him was nonexistent.  The New Queer Cinema movement includes actual classics, such as Paris Is Burning, My Own Private Idaho, and Poison. In some circles, Gregg Araki, the director being referenced, is a leading name in this type of film. This month there are a few of his movies leaving the channel, one of which is The Living End.

So, let’s get this out of the way early on. Yes, The Living End looks very cheap. There’s a reason for that, it was made for $20,000. If people are going to watch truly independent film, this is something you have to make room for in your heart. Despite its obvious lack of production value, or maybe because of it, this movie feel purely genuine. The plot doesn’t take much to describe. Jon (Craig Gilmore) is a gay, newly HIV positive, film critic who is basically dissatisfied with his liffe. Enter Luke (Mike Dytri), a drifter and a hustler to shake things up. The two quickly become entangled, both romantically and legally, as Luke has done some terrible things (and continues to throughout the runtime).It has been called a gay Thelma & Louise, but frankly, that simplifies it too much by the comparison.

The Living End is very much its own film, and it begins and ends with Dytri’s performance paired with exquisite camerawork and framing from Araki. It should be noted that Araki filled the roles of director, writer, editor, and cinematographer. Sometimes, in small films, people expect less skill behind the camera. But frankly, this is some of the best work you are likely to see. Every shot is composed professionally and helps tell the story in a coherent way, even without the aid of the sparse dialogue. And if there is one thing that Araki is phenomenal at, it is shooting the partially nude male body. In many films, male nudity is at worst a threat and at best a joke. In The Living End, one can nearly feel the desire and heat coming off the screen.

In the initial heavy flirtation (which leads to much more) between Luke and Jon, the camera initially focused on the two men’s faces, capturing the stilted breathing of lovers that know what is about to happen, but still feel the anxiety of anticipation. As the scene continues, the camera moves, but achingly slow in pace, so slow that if feels that we are discovering the Luke’s body as Jon does. This is the male gaze, but slightly inverted, clearly for a queer audience. This version of the male gaze does not take away power from Luke, instead it imbues him with almost a supernatural allure. And if you ever needed proof that both consent and detailing STD status can still be sexy, The Living End proves it beyond a shadow of a doubt. When Luke notices Jon’s trepidation, he simply asks with a smirk, “Do you want me to stop?” Craig Gilmore’s performance in that moment is absolute perfection. The hesitation, the desire, and the nervousness behind telling this beautiful man that he is positive all ring completely true.

Frankly, the only negative of The Living End is Araki’s need for connection. Jon has a close female friend, Darcy (Darcy Marta) who is representative of safety, and by nature of her gender, completely devoid of risk regarding sex for Jon. And in any film about escaping the reality of the world, criminal or not, there needs to be a pull back to the real world. That choice makes sense. But Darcy is not that pull. Instead of a friend genuinely being worried for her friend, as she should be, her performance and the dialogue given to her by Arakis’s script, she becomes almost a nagging mother to Jon. There is far too much time spent with Darcy and her clearly horrible boyfriend that could be with Jon and Luke.

The Living End is a movie that is surrounded by violence, but never completely consumed by it. Araki doesn’t shy away from the blood inherent in death, but it always stops just short of morbidity. Instead, he leans into the absurdity of each moment until it’s almost funny. It is also a film clearly about sex and the fear that comes with it in the gay community at the height of the AIDS epidemic. There is an odd subplot in which Jon’s phone number has been written down on a wall somewhere and he receives calls from men looking to “get off” and he continues to hang up on them. The only one who can push through this terror is the force of  personality and sexual energy that is Luke.

The sexuality that is so important to the entire film is imbued with and given momentum by the violence enacted beforehand. Early in the film, Jon agrees when Darcy tells him that he is attracted to guys who are “psychopaths.” And by the very nature of Luke’s actions, he clearly has a flexible moral code. He repeatedly states that the two of them can do “whatever they want” because of their diagnosis. It is unclear by the end whether Jon agrees with this, but at the very least, he has allowed himself to be pulled into a world in which they have been party to acts he never would have considered in his safe life beforehand.

The Living End has a lot of ideas packed into 84 minutes. It is an indictment of the police, of standard relationships, and even of doing the so-called right thing. It contains both fear and freedom in the same breath. Araki’s vision is unfettered by distractions and needless dialogue. And most importantly, Araki makes zero judgment of his characters, even when murder is involved. The Living End challenges to the very end, leaving us unsure of both where Jon is headed and how we are meant to feel about it. If you have never seen any of Araki’s films, The Living End, given its simple structure, is the perfect place to begin.

Next week, we close out the month with Céline Sciamma and Tomboy