Movie Review: “Wander Darkly” is an Intriguing Story about Love and Loss 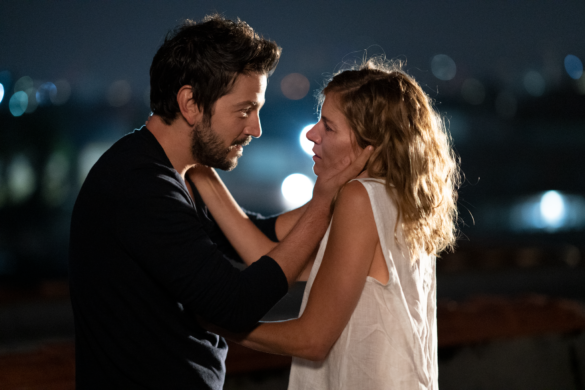 Synopsis: A traumatic accident leaves a couple in a surreal state of being that takes them on a disorienting journey through their shared memories.

Writer/director Tara Miele presents a new and intriguing view on love and death – a peculiar combo – in Wander Darkly. The movie, led by emotional performances by Sienna Miller and Diego Luna, plays with the turmoil of an erratic woman to inspect her romantic relationship that is about to collapse. This way, love, and survival are intertwined in a confusing and yet vital way.

The story centers on Adrianne (Sienna Miller) and Mateo (Diego Luna), parents to a new-born baby that are going through a rough patch in their relationship. In their fixed night out (better and cheaper than therapy), they continue arguing about their relationship. While she is determined that they should no longer be together, Mateo insists that they just need time to adapt to their new circumstances. Their discussion is cut short when they are violently struck by a car. When Adrianne wakes up, she realizes that she is stuck in a place where only Mateo can see her. Is she dead? Is she stuck in a Los Angeles-themed purgatory? While she is convinced that she is gone, he insists that she is very much alive. They embark on an emotional journey into their relationship to help Adrianne recover the sense of aliveness that she has clearly lost.

While the movie revolves around death, its essence is about love and the complexity of romantic relationships. With a similar style to Eternal Sunshine of the Spotless Mind, Wander Darkly jumps in time, goes through memories to inspect them closely, and asks tough questions about love, loyalty, and self-contentedness that allow us to understand Adrianne and Mateo’s relationship and their shared frustrations.

It is no surprise that both remember things in a conflicting way or see pivotal moments in their relationship from completely different points of view. The memory exploration is surreal and nostalgic. Sometimes Adrianne and Mateo get hold of their past selves within their shared memories as they reflect on what happened, the way they felt, and the way they feel now. Through sincere communication, they try to mend past injuries, but is it too late?

Wander Darkly strives from the confusion that creates not only on its characters but on its audience. This drama uses a convoluted premise to reflect about a love story that is profoundly broken. Adrianne and Mateo are deeply flawed characters that feel real and messy. It is interesting to consider that the story is seen from Adrianne’s point of view. Is she being extremely hard on herself and noble with Mateo? This is a possibility when we notice that she is unbearable at times – always finding something to be unhappy about, pestering him about getting married and having a baby – while he maintains a patience and devoted attitude towards his always-unsatisfied girlfriend.

This overly dramatic movie shines because of the merit of its stars. Sienna Miller, who has long suffered on thankless and hard-to-remember roles, shines as a woman that is overly complicated and on the brink of madness. Her emotional dissatisfaction and suspiciousness towards her partner contrast effectively with a flirty and warm Diego Luna, who uses his Mexican charm and disinterest on drama to confuse and frustrate her jealous girlfriend.

The movie also deserves a special recognition on the use and representation of a Mexican star and character. Although several things of the Mexican culture are used in the story – the festivities of Día de los Muertos is a clear example –, Luna creates a character that is shaped by his roots but that is not stereotyped or rudely portrayed. Mateo is a man that happens to be Mexican, and his inheritance is reflected through his fears – he is afraid to be like his father – and personal failures – he runs away when things get hard. This is probably one of the most satisfying Mexican characters presented in an American film.

In addition, the technical aspects of the movie become elements that provide clues to understand it. The music – composed of violins and pianos – is dramatic and affecting. The costumes sometimes work as the only hint that allows us to understand the pass of time or the change of dimensions. The editing is precise and methodical in a context where confusion and uncertainty reign.

Is Adrianne still alive because of the special link with Mateo or is this troubled relationship the reason why she cannot move on? The uncertainty of life and death is necessary for these characters to make peace with each other and their life decisions. While Wander Darkly inspires more questions than answers, it gives us the possibility of exploring a flawed but profound love story. Fortified by a raw commitment from its leads, Wander Darkly is a sensitive and dramatic reflection on love, loss, and grieving.

Classic Film Review: ‘The Towering Inferno’ Does Not Hold Up

Most cinephiles will get a faraway look in their eyes when they reminisce about 1970’s cinema and the... Read More »

Night. Thermal view. One man digging a grave, while two others bring a victim and beat him to... Read More »

Movie Review: ‘Malcolm & Marie’ is a Masterclass in Character Study and Escalating Conflict

How do you begin to review a film that is focused on the notion of having a leading... Read More »