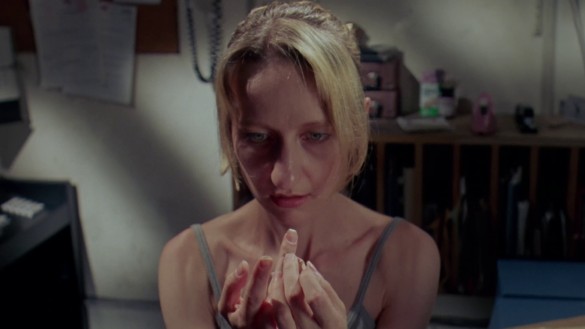 So, sometimes, when you pick a movie on the Criterion Channel basically at random, there is some risk involved. But risk isn’t bad. I’m not referencing the risk of a movie you don’t enjoy or is “bad, ”as that is a risk on absolutely any streaming platform. I more mean the risk of something completely foreign, and not in relation to the language spoken. When you watch a great deal of film, it is tempting to feel like you’ve seen it all before or that there are only so many stories to tell. But this streaming service in particular, there is more than a slight chance of finding something so strange that it defies you to express an opinion. And that brings us to Sara Driver’s Sleepwalk.

Sleepwalk is part of a movement called No Wave Cinema. If you’re already confused, don’t feel bad! I had to look it up too. No Wave, focused on very low budget filmmaking in New York in the late 70’s to the mid 80’s, holds a no frills attitude towards filmmaking and focuses mostly on mood, as opposed to plot and societally accepted style of acting. Honestly, it helps to have this context going in to Sleepwalk because the acting and storytelling can be extremely off putting depending on your expectations and attitudes towards film acting.

That being said, Sleepwalk puts these choices to good use because, at its most basic, it is a fairy tale. And these types of stories lend themselves to stylistic choices that are off kilter or left of center. Director Sara Driver has such a firm grip on the magical realism and fantasy elements that even in moments of confusion, and there will be many, the audience feels pulled along by the sheer awe and beauty on screen. The opening scene, after some narration,  is emblematic of this beauty and control. A woman in red sits in a red room, and closes parchment in a red hued wood cabinet. Ever so slowly, she removes one piece of the parchment, wraps it, and searches to see if anyone is near, and leaves the room. Following this moment, Driver allows ominous notes from the score from Phil Kline fill your senses. That foreboding finally, achingly comes to fruition with the appearance of a thief in the night, whom we meet later as Barrington (Tony Todd). The decision to shoot this moment without dialogue is a perfect example of No Wave decisions. SImply the appearance and the musical context lets us know where each character should stand in our minds.

It is only after this that our main character, Nicole (Suzanne Fletcher) appears. Quickly, she is hired by Barrington and his boss, Dr. Gou (Stephen Chen) to translate the stolen manuscript. And here is where your enjoyment of the film will rest. Fletcher’s performance is purposefully stunted, mainly in order to draw your attention to the fairy tale nature of the narrative. Realism has no place in a film that contains foretelling by the narrator, mutilated corpses (off-screen), characters named Ecco Ecco (get it?), and magically balding roommates. But remember, No Wave is about mood, and Driver’s direction of Fletcher seems focused and pointed and not due to simply poor acting.

Sleepwalk is a short film as far as runtime but never feels quick. Driver, along with cinematographers Frank Prinzi and Jim Jarmusch, makes use of absolutely every second. Every frame is exquisitely framed and has a sense of purpose that, despite the slow pace, pushes the narrative forward with a palpable sense of tension. Alongside these stunning images, the music is also perfectly timed to the actions on screen. This is not simply background scoring and is not simply to fit the all important mood. Instead, the editing (Li Shin-Yu), sound, and movement of Sleepwalk seems to nearly perform a dance, which sells the exact emotions Driver wants to elicit.

Sleepwalk is not an easily accessible movie, and I imagine no film under the banner of No Wave will be either. But some movies, although enjoyable, are easily forgettable. As soon as the credits roll, they melt away like wisps in the breeze. This film feels like an opposite of this. During the viewing, it is galling, confusing, and frustrating. But thinking back on Sleepwalk, it becomes more important and full of meaning. Driver’s work here is film as an art piece and will mean many things to different people. And this is exactly why a service like the Criterion Channel is worth the time spent. There is an excitement, a glory, in finding something wholly different and new, regardless of your opinion of it being “good” or “bad.” Sleepwalk is absolutely an experience, and a pretty unforgettable one to roll around in your mind and puzzle over.

Next week we take a look at Caché from director Michael Haneke.