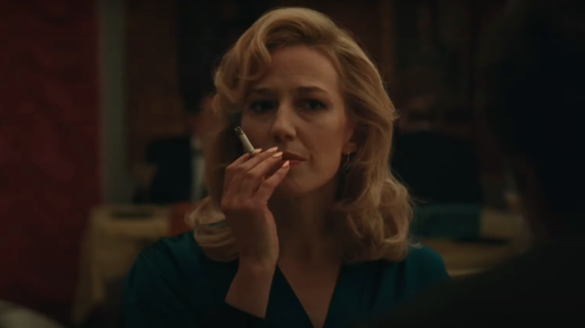 Since its debut at the Sundance film festival at the beginning of the year, director Sean Durkin’s The Nest has come away with a lot of buzz and attention. Which we can mainly attribute to being the long-awaited Durkin’s return to the big screen after his critically acclaimed feature debut (Martha Marcy May Marlene) back in 2011.

The debut, which solidified Durkin’s name as one of the best new and upcoming filmmakers on the Hollywood scene, also introduced the world to the talent of Elizabeth Olsen and Sarah Paulson, which went on to be two of the most influential actresses in the past decade. And it seems like a repeating cycle, Durkin’s return with The Nest is about to do the same thing for Carrie Coon.

The Nest is set during the 1980s and follows the story of the O’Hara family, when the father (Rory O’Hara), played by the magnificent (Jude Law) proposes that they abandon their suburban American life and move to the English countryside so that he can explore new business opportunities. The film uses this setup as a jumping point to dive into themes of male ego in a relationship, fraud facades, and deception in marriage as the family slowly discovers that Rory may not be who he says he is.

The Nest is full of solid performances across the board from, minor supporting characters like Anne Ried (Rory’s mother), who steals the show for only one breathtaking scene, to newcomer Oona Roche (Sam O’Hara), who gets introduced to the big screen with a bang. And of course, Jude law who is up for the challenge yet again and gives a career highlight in here but still comes second to the legendary performance of one Carrie coon.

Carrie Coon, much like Olsen and Paulson before her, wasn’t a new face to the industry when she got the chance to work with Durkin. On the contrary, she is well known for her excellent performances in both TV Shows The Leftovers and Fargo, a role which earned her an Emmy nomination in 2017. The Nest isn’t even her cinematic debut, which came at the hands of David Fincher in 2014 when she played the role of Margo Dunne (Ben Affleck’s sister) in Gone Girl, and she also played small supporting roles in both Steven Spielberg’s The Post and Steve McQueen’s Widows. So what makes the role of Allison O’Hara unique for Coon after she seemingly worked with a group of the best directors of all time?

Well, the short answer is none of the other feature roles let her unleash her full potential and ability on the screen quite like this one. This is a star-making performance, one for the most part that isn’t filled with shouting and screaming or over the top moments that usually get the attention. But its brilliance comes from its subtlety and preciseness that brings invisible power and command to the character that lets Coon own the screen with the slightest gesture.

Coon’s immeasurable control over the film couldn’t be achieved without the cleverness of Durkin’s screenplay and directing, who puts her character at opposing odds most of the time. Playing the role of a conventional housewife when she’s far away from it, being a deeply flawed mother figure yet still have the empathy to put on a smiley front for her kids.

Coon’s performance brings all of those conflicting odds to the screen with a brilliant physical portrayal. Sometimes she will hold back and put small touches to allude to her feeling like a dissatisfied glimpse in a mirror, a dominant posture, or a cold hug. And other times, she will go all in and lets her physicality weaponize the space between her and Rory when arguing or let herself loose to emit all sorts of emotions of frustration, anger, and loneliness during an incredible dance sequence in the final act of the film.

Her physical performance wasn’t the only thing that Coon brought to the film; she was to The Nest what Dicaprio was to The Wolf of Wall Street. She will carry you through the dull moments, and when the time comes, she will wow you with her execution, especially in two dinner scenes between her and Rory that you will certainly remember after the film ends, and if her previous roles didn’t convince you before that Coon is a force to be reckoned with on the screen, this should take care of that.

Now the question becomes, will the Academy even notice coon’s masterful work here?

Probably not, because of the packed race in the leading actress category, which includes some heavyweights like Viola Davis, Frances McDormand, Kate Winslet, and Amy Adams all competing for Gold this performance will likely go under the radar of many voters, and that’s honestly a shame because we have here a deserved Oscar winner performance, and most people won’t get to see it because it doesn’t have enough Oscar buzz.

So let’s start here and kick off the official Oscar campaign for Carrie Coon. A nomination will do just fine now, given the circumstances, and to anyone who is reading this and still haven’t seen The Nest, Go watch it for Carrie Coon alone, and I promise you will not be disappointed.