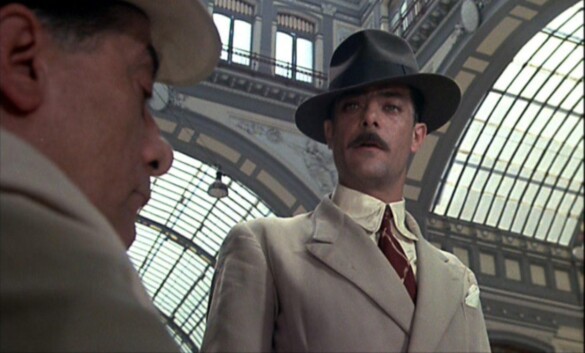 Critiques of all types of narrative media are full of overused sayings and cliches. “There are seven kinds of stories.” “Style over substance.” “It was all a dream.” “All’s well that ends well.” The list goes on and on. But today, let’s focus on one we have all heard hundreds, if not thousands, of times. “The journey is more important than the destination.” We hear this not only in analysis but maybe throughout our lives. Sometimes, this is said to placate us, to keep us calm and focused on the moment without getting overwhelmed. Sometimes, it is said to help us remember our mortality. The end journey is the same for all of us, in a long enough timeline. But film is different. A film has a specific endpoint, and it is not always a death. But one film that embodies this oft repeated phrase is Seven Beauties, directed by Oscar-nominee, Lina ​​Wertmüller.

Put simply, Seven Beauties is the story of a fool. Put in a more complex way, it is the story of a fool who thinks himself wise and honorable. Pasqualino Frafuso (Giancarlo Giannini) is an Italian soldier, on the run with a compatriot. Seven Beauties tells his story and how, supposedly, a woman is to blame for his many predicaments, including being in war, being put in an internment camp, being arrested, the list could go on. When one reads examples of analysis of this film, there are many different readings, ranging from ​​Wertmüller being called a genius to accusing the director of being a female misogynist. Like most things, the truth for me lies in between.

Pasqualino is a fool and, in moments, a monster. He fancies himself honorable, even becoming violent towards his sister for becoming a prostitute. He continues his violence by killing her pimp, cutting up his body, and shipping it to three different Italian provinces. And yet, none of this is him at his most despicable. While in a mental hospital (to avoid prison), he rapes a female patient. Having your protagonist, especially a character we are meant to both laugh with and at, is a dangerous line for a film. ​​Wertmüller makes strong choices by mixing genre (specifically war and comedy) that will not work for all audiences. She makes a pointed choice to punish Pasqualino with another sort of rape later in the film. However, this is a sequence that uses the larger female form as a grotesquerie, so there is clearly mixed messaging. Pasqualino is punished for his sexual acts with a stereotypically attractive woman by being abused, humiliated, and used by a large, evil woman. So, if you desire to see the fool/villain punished, you receive it, but at the expense of other virtues.

Seven Beauties is a strange movie, one that is hard to believe exists. Making a comedy, and not a full satire, about world war is a tall order. ​​Wertmüller is in a class of her own when twisting tones to fit her ends. She is able to make us both laugh with Pasqualino and revel in his punishments, with much thanks to Giannini’s ultra expressive face and eyes. At many points, especially because the film opens with Pasqualino and a fellow soldier, the audience may expect to move away from this sometimes vicious fool. But ​​Wertmüller won’t allow this, forcing our eyes to a man that seems unforgivable and toxic. And he is, but despite what our history with narrative tells us, maybe war is not made for heroes, but for survival and unforgivable acts repeated ad nauseum.

But back to the journey. At the beginning, as mentioned, Pasqualino is affronted by the idea of his sister’s virtue being tainted through promiscuity and prositution. At the end of the film, after all, he has gone through to survive (including actual murder of a friend), he returns home to find nothing has changed and a woman he loves has turned to the same vice in order to survive herself. But Pasqualino is a changed man, he now understands what he needs to survive after being faced with fascism. Strength in numbers. He wants to propagate, to provide his own army of family. A family he has essentially rejected before his journey. So truly, nothing has changed externally, but internally, Pasqualino, whether you like him or not, has changed internally enough to adapt to the fascist world at his doorstep.

Seven Beauties is a film that has and will continue to divide. There are moments of beauty and grace, wrapped up with disgust and horror. It is a difficult movie to enjoy, but I cannot deny the skill and mastery of ​​Wertmüller. She managed to bring me along on a journey I could not have wished on myself, and yet, much like the evil female Nazi, there is a core of humanity and fear within Pasqualino that is a part of all of us. We all, when faced with terror, have the human desire to survive, even if Pasqualino is a man I would never want to survive with, side by side.