Movie Review: ‘Crimes of the Future’ has David Cronenberg Blending the Old with the New in Tittilating Fashion 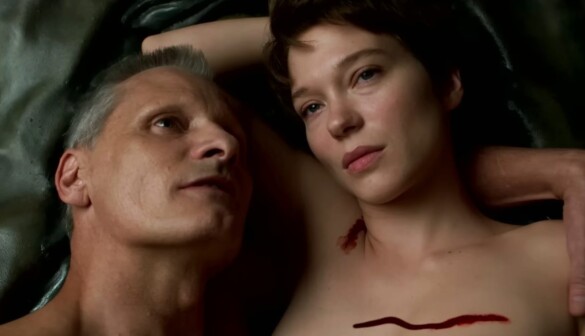 Synopsis: Humans adapt to a synthetic environment, with new transformations and mutations. With his partner Caprice, Saul Tenser, celebrity performance artist, publicly showcases the metamorphosis of his organs in avant-garde performances.

Everybody has their favorite directors at different stages of their lives, but for me, my number one pick has stayed the same: David Cronenberg. I grew up watching horror films; I was entranced with them ever since I was little, watching some of the 80s genre classics with my family. When I started exploring the vast world of horror by myself later on, I found Mr. Cronenberg’s work, and my life hasn’t been the same since. Like many, my introduction to his filmography was his 1986 hit, The Fly, in which I saw some of the best practical effects and makeup I have ever seen, and to this day, I haven’t seen many films that have surpassed it. There are also plenty of examples of astonishing and wince-inducing effects that still hold up (everything in Videodrome, the veins and classic head explosions in Scanners, the hallucinogenic creatures and typewriters in Naked Lunch, just to name a few).

Although he may be known as “the king of body horror,” which he definitely is (with his almost “protege” Julia Ducournau stepping in as the queen), that isn’t all he’s known for. Each film of his has an articulate message that intertwines with one of his favorable themes: the physical manifestation of psychological trauma, the distinction between morality and immorality, or the relationship between the social and the individual. Whether it has a shock factor or not, there are nuanced points of intricacy that express harrowing experiences with profoundness and grace. You can say that there are two halves to his body of work – one haunts the body (Shivers or Crash), the other, the mind (A History of Violence or A Dangerous Method), which have been the emphasis in his latter features and are equally impressive. Nonetheless, Cronenberg is back with a new film, his first since the 2014 Hollywood lifestyle satire Maps to the Stars, that’s being sold as his return to his provocatively engrossing and richly philosophical nature of the 70s and 80s: Crimes of the Future.

If that title sounds familiar, it is because he already has a 1970 feature named with this exact title. While that can be described as a Cronenberg test drive (the film where he started to implement some provocative and instigating concepts but was afraid to expand upon them), this is more of an expression of his collected skill sets throughout the years, albeit specifically from his work around the 80s and 90s. This is viewed in different forms (direction, thematic, visual, and narrative). There’s this aspect of “connoisseurs” of a rancid type of eroticism, which was expanded upon in Crash with the lustful breadth of car crashes, as well as the romanticism that inhabits several of his features (a hidden love story of some sort). In this case, it revolves around watching underground, avant-garde arrangements of organ metamorphosis and mutations by performance artists. “Long live the new flesh” was the Videodrome expression that set the course for the modern auteurs of horror cinema. There’s a possibility that Crimes of the Future’s new passage, “surgery is the new sex,” will plant seeds for the next generation of upcoming filmmakers to rise and break the molds of exploration within ghastliness and desire.

Crimes is set in a futuristic world, where not only is there high technological advancement, but people’s bodies are changing to a high extreme due to the faux environment. Is there a post-human evolutionary stage amidst them all? That’s what everyone seems to believe, especially when they see such avant-garde and squirm-inducing art pieces by Saul Tenser (Viggo Mortensen) and his partner Caprice (Léa Seydoux) in which they do surgery and tattoos on internal organs to a deferent audience. Tenser has a strange yet intriguing ability; he can grow new internal organs. This causes people to rethink the body’s possibilities and the broader exploration of tactility within such circumstances. These newly grown innards have no explicit function, but it is undoubtedly seen with high interest. Some want to shed light on this mutation, investigating it with a close eye. Since most people have evolved to the point where there isn’t a sensation of pain, they are interested in how far they can go with witnessing such acts.

This creates a parallel with the critically-divisive Crash, in which people attended car crash simulations, or the character themselves caused the crashes in order to pursue a sexual climax. With this comes the instantly-quotable “surgery is the new sex.” In that world, sex and surgery are equivalent to one another since the lack of pain makes people explore what’s on the inside rather than on the outside, both figuratively and literally. Although the people attending these performances aren’t experiencing the acts themselves, it creates a sense of pleasure and sensual fulfillment – seeing the penetration from the surgical tools and pondering about how it might feel. In a way, the arrangements are the equivalent of pornography for them. One of the National Organ Registry investigators following them is Timlin (Kristen Stewart), whose obsessive behavior slowly changes the course of the path of Tenser and Caprice. There’s more to the story, but explaining further on would be a crime of its own.

During the 75th Cannes Film Festival Q&A, David Cronenberg said that it is a coincidence that there are some thematic and narrative resemblances with some of his past work. And it is evident as you keep analyzing the film as the days go by. It alludes to the past while aiming for a new future; it’s not a return to form, but it is the visualization of a man motivated once again to dwell in the bowels of the expansive body horror genre that he harbored and forged. Another evident theme is the interconnection and differences between erotic violence and damaging ardor, and these are expanded upon in Videodrome, Dead Ringers, and Crash. Between those lines, there’s the aspect of what shapes and affects us. Cronenberg wants us, the audience, to think about these conceptions and question whether pain is the critical factor to pleasure or what we would do for satisfaction. Here, the world is very different, and the characters have found an exaggerated way to reach those levels of seductive fulfillment. Is something growing within helping us unwind and develop into something new? If it isn’t, will it curse that untried generation and torment it like a cancer?

These assertions are all over his filmography in one way or another, but here it takes a more extensive enhancement. Should we succumb to these changes our bodies are making or resist them? Tenser is questioning that himself as he quotes: “I don’t like what’s happening with the body, which is why I keep cutting it up.” There’s much to inspect and study in Crimes of the Future, even if parts of the visual narrative might leave a bit more to be desired. As I have read elsewhere, I would have loved a grand operation finale, as it was teased through similar parts of the runtime, but I think it is for the better. It doesn’t need to exaggerate the conclusion just because it is body horror; the ideas implemented during the film are worth digesting on their own. One thing that might change a person’s viewing experience is if they indulge in the promotion. It isn’t as gory or provocative as it was initially sold as (even though Cronenberg did get his walkouts at the Cannes premiere in the first five minutes). Of course, like most of his features, it has its moments that will provoke audiences, yet Crimes of the Future is more restrained than one might have anticipated.

It’s not a shock factor carnival ride. Instead, there’s a plot-heavier sensibility to the narrative; plenty of conversations that represent the idea of how people interact in that day and age (props to Cronenberg for his spectacular world-building). Within these interactions, you see jealousy and rivalry between performance artists and “lovers”, whispered relations of investigative relations, among others. However, this movie’s problem is that we don’t see the effect of this “new flesh” on that civilization outside of our leading trio. Nevertheless, it sets the correct atmosphere of unease and the element of the viewer exploring this world for the first time, thanks to cinematographer Douglas Koch and composer Howard Shore – who doesn’t miss when it comes to his collaborations with the Canadian auteur. The actors go all-in with whatever the director has on the table regarding the performances. Mortensen is always an intriguing lead, primarily when he’s collaborating with Cronenberg – they have a Scorsese and Deniro type of cinematic bond. But Léa Seydoux steals several, if not most, scenes from him. Seydoux is one of the most entrancing actresses working today, which further enhances her acting abilities, as her character is somewhat the opposite of what Viggo has to offer.

While one brings on the darkness in the imagery, the other shines with radiance, giving a spark of humanity and elegance, even in the weirdest circumstances. That’s another aspect where Cronenberg excels; in the oddest of situations and acts, he still makes time for the characters to feel human and not just like other beings from outer space. On the other hand, Kristen Stewart goes on a more whispered and quirky side of acting, and it totally works, in my opinion. She doesn’t get to do much as a whole, but her overall presence adds to the various concepts and pictorial ventures. In the end, Crimes of the Future will be divisive, as expected from Cronenberg. Some will go with it while others won’t. Nevertheless, this was my most anticipated film of the year, and it didn’t disappoint. My favorite director still strives as one of the best in the genre. And although it doesn’t match up to Julia Ducournau’s work (Titane and Raw, which is my favorite film of all time), it presents some fascinating ideas about how we see the changes in our bodies, violence within the realms of eroticism (and vice versa), and the introspection of pleasure in a world without pain. Long live the new flesh, where the body is reality, both blood curdling and stimulating. Thank you, David Cronenberg!