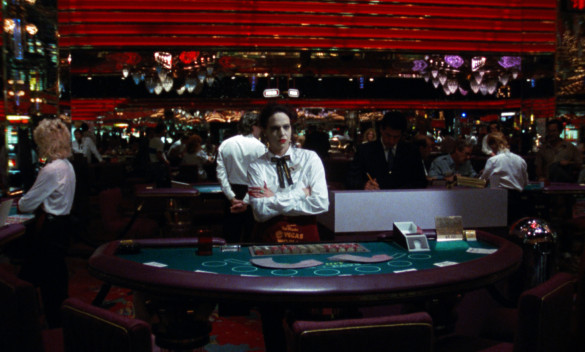 One of the many things to love about film is that it is never one thing. For just about every viewer, there is something to be found regardless of your context or desire. Some films are pure comfort, in which you can slip into it without much thought. Some films focus more on stretching the viewer, pushing them to their emotional limits. And then there is everything else in between. Like I said, something for everyone. Almost separate from this are the experimental films that, whether you like them or not, push the boundaries of what storytelling in a visual medium can be. If you are having trouble determining if that is an insult or a compliment, welcome to this edition of Criterion Crunch Time.

If you happen to be searching for a film with an actual narrative, I cannot and will not recommend Queen of Diamonds from director Nina Menkes. I won’t lie to you, this is a movie that I can’t imagine rewatching. Not due to disturbing content, but rather because it evokes a certain feeling while watching that will never be created. Queen of Diamonds cackles at the idea of “good” and “bad,” and dares you to place your own restrictions around it. In its scant 75 minute runtime, I would be shocked if there were 75 words of dialogue.

The visuals are impressive, but not in a shocking, bombastic way. Queen of Diamonds is pure hypnosis on film. The moment you think there should be a cut, get comfortable. There will be at least 15 more seconds of focus on the image on screen. There are visuals here that usually demand excitement. But whether they be casinos, wild animals, violence, or even fire, Menkes purposefully drains them of their pop, and certainly of any allure. She begs the question, why are you excited by these things?

Let’s focus on the casino for a moment. Her lead character, Firdaus (Tinka Menkes) is rarely shown in closeup. As a note, I have no memory of her name being spoken, which only increases our distance. Another way she accomplishes this is by focusing more on her hands than any other part of her. The film actually opens on a shot of her hands stretched above her, Menkes’ face down in her pillow, obscured from us. Her hands are important in many ways. She is a dealer in a casino, her hands are how she makes her living, her way in the world. Also, it hammers home the point that people don’t truly see her. For the gambling public, she is a means to an end, something in the way of money and excitement. She is not something to be focused on, but something to get around.

The violence mentioned earlier is solely focused on women, some obvious and some not. It should not go unnoticed that although women are the focus in Queen of Hearts, they are nearly never listened to, even when screaming. Early in the film, Firdaus sits quietly at a bus stop and is spoken to by a nameless man. He learns that she is unhappy and chooses to serenade her, supposedly to cheer her up. One look at her face tells us (and him) that this is unwelcome. But he continues, until, stopping, asks her if she feels better. The complete and utter lack of awareness, likely on purpose, sets us on edge despite the nearly nonsensical sequence of events. The second moment of violence is much more obvious. Firdaus’ neighbor routinely yells at and strikes his wife. But this is another example of Menkes’ removing tension through realism. When he attacks her, there is a complete lack of shock, she simply falls on her backside, almost as an inanimate object would. The only hint of passion is her hopping back up and slapping him. However, immediately after this, the couple brush themselves off and go about their day as if nothing happened. This is their normal. A brief flash of emotion, and the couple falls back in line. It is no accident, and a complete slap in the face when we are forced to endure their wedding, the bride covered in bruises as Firdaus looks on.

Nina Menkes is truly a challenging, baffling director. Two of her movies are leaving the Criterion Channel at the end of the month. I urge you to make the attempt with either Queen of Diamonds or Phantom Love. I firmly believe that it is important to stretch ourselves through film. And if nothing else, she will provide visuals that will leave a lasting impression. Menkes’ painstaking time taken in her films, even with short run times, will test your patience and your expectations, regardless of how many movies you have seen.

Join us next month as we watch two more movies leaving The Criterion Channel!