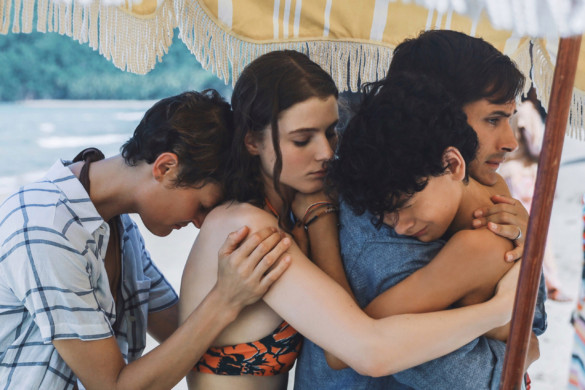 Synopsis: A family on an island resort is invited to a secluded beach where they begin to age at an alarming rate.

Every now and then, I’ll catch a film that makes me consider all of the various reasons why I love seeing movies. Oftentimes, there may be striking visuals, enticing use of the camera, fascinating characters, or narratives that challenge me to think on a deeper level. Still, there are other times, commonly during the summer movie season, where I enjoy just sitting back and being absorbed by a goofy premise that I choose not to take too seriously. Old, the latest release from M. Night Shyamalan, falls directly into that category.

Those who caught the first teaser for Old when it dropped during this year’s Super Bowl could likely pin down the overall concept of the movie. We are introduced to a family of four led by Prisca (Vicky Krieps) and Guy (Gael García Bernal) as they ride a bus to a glorious tropical resort. While it’s intended to be a fun vacation for 11-year-old Maddox (Alexa Swinton) and 6-year-old Trent (Nolan River), we soon discover that it’s also the last getaway for the secretly separating married couple. Shortly after their vacation begins, they are invited by the resort manager to embark on a short journey to an excluded beach nearby. The family graciously accepts along with another family, a married couple, and a young man already on the island. However, the beautiful beach turns out to be more sinister than they expected.

As displayed by the posters and trailers for the film, it would not be giving anything away to say that all of the individuals on the island begin to age very, very quickly. This is most notable in the children, who become teenagers within a few hours (thus introducing Thomasin McKenzie and Alex Wolff as their older versions of Maddox and Trent). As this occurs, the group on the island attempts to discover why they are experiencing this strange phenomenon, as well as how to get off the island.

In what is sure to be some of his best work since Signs, Shyamalan almost immediately delivers the goods that bring audiences to his movies. The plot, though silly and easy to poke holes in, draws us in by placing us directly alongside the characters as they experience the horrors of the beach. As a result, the fear they feel is palpable and leads to the sort of tension that could have viewers squirming in their seats. This is maximized by rapid camera movements and some PG-13 body horror that may result in the urge to look away despite rarely being overtly graphic.

Though the film largely operates as a suspenseful form of horror, it’s a mystery at heart. Much of the time on the beach consists of the group attempting to find ways off of it. Throughout this time, we witness the dangers that come with individuals placed under immense pressure with time running out. The characters are never given time to breathe, due to either the oncoming death as a result of continuous aging or the hazards they embark on to try to escape. During all of this, we’re left unsure of why they were sent here, and the clues left throughout are vague at best.

As always with Shyamalan, this puzzle cannot be completed without a twist. Unfortunately in this case, it results in a display of some of his more tired tendencies as a filmmaker. There comes a point in the film, particularly during a quiet moment of our original family of four sitting on the beach, where it seems as though it may be going for a reflection on how families get so caught up in making the most of the passing of time that they forget to sit and appreciate the small, pleasant moments. That may be the case for a brief period, but it goes up in smoke when the twist finally arrives. Without spoiling it, let’s just say that I found it intriguing, but not as impactful as I was hoping for. It also arrives as a result of some awkward dialogue in the beginning that results in very obvious plot contrivances that allow the narrative to work.

While the characters here are presented in a way that entices viewers to relate to them, there’s also some suspect acting at work here. The tense nature of the film tends to result in some harsh line delivery of severely unpolished dialogue. Even McKenzie, a great actress who is an expert in conveying emotion, has some vocal tendencies in an attempt to display her inner child that doesn’t always work. The best of the bunch is García Bernal, who delivers the most naturalistic performance of the ensemble. The most disappointing aspect of these characters, however, is the use of mental illness as a plot device for one of them. It’s become a common issue in Shyamalan’s films to depict mentally ill characters as villains prone to violence, and that’s sadly the case here as well.

Though Old has a number of observable shortcomings, my overall impression of the film that sticks with me is that of excitement and amusement. When asked my thoughts as the film ended, my immediate response was that I found the film entertaining from start to finish. For those intrigued by the marketing for the film, or even those who go in with little expectations like myself, it can be a wildly fun ride if you lean into the silliness of it all.