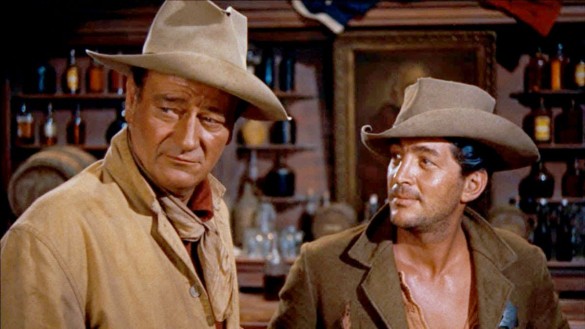 Synopsis: When gunslinger Joe Burdette (Claude Akins) kills a man in a saloon, Sheriff John T. Chance (John Wayne) arrests him with the aid of the town drunk, Dude (Dean Martin). Before long, Burdette’s brother, Nathan (John Russell), comes around, indicating that he’s prepared to bust his brother out of jail if necessary

The French New Wave pushed cinema forward as an art form and helped to turn genre-deconstructing films into commercial fare. Directors like François Truffaut and Jean-Luc Godard were open about their reverence for Hollywood genre films and appreciation of the subversive qualities of a film like Douglas Sirk’s All That Heaven Allows (1955). These views were considered groundbreaking at the time and, while working as critics for Cahiers du Cinema, Truffaut and Godard pushed back against the traditional ideas that had been set out by critics such as Bosley Crowther. They sought to elevate ‘trash’ into high art and challenge the perception of certain genre tropes. When they, and their fellow New Wave directors, began to make films themselves, they included obvious homages to the works of Hollywood directors that they admired and produced films that felt like essay-style analyses of those classics. Films became more and more self conscious about the fact that they were commenting on genre conventions and aiming to serve as a feature length piece of criticism that happens to resemble a generic horror movie.

Rio Bravo (1959) is one of the mainstream blockbusters of the 1950s that had a profound impact on Godard’s view of filmmaking. He wrote that Paul Javal, the protagonist of Contempt (1963), wanted to emulate one of the characters in Rio Bravo, and aimed to capture a Hawksian sense of minimalism and understatement.

When you become aware of the film’s historical significance, it does take on a patina of respectability that it might not have otherwise possessed. On its surface, this has most of the ingredients of a typical John Wayne vehicle and isn’t all that unique. In fact, I’ve been informed by others that El Dorado (1966) and Rio Lobo (1970) are essentially remakes of Rio Bravo. I think it gains a sense of specificity from the fact that this film mostly exists as an excuse to see a group of men sit around and chew the fat. The threat of violence always looms over them and there is an eventual shootout, but the real meat of the story involves male bonding and philosophical debate.

Wayne portrays Sheriff John T. Chance, a morally upstanding individual who is desperate to protect the citizens of the small town that he polices. He arrests outlaw Joe Burdette (Claude Akins) for murdering a man in cold blood, and has him locked up in the local prison. This arrest causes problems for Chance because Burdette’s brother Nathan (John Russell) is a powerful gunslinger who decides to break his brother out of jail when he learns about what Chance has done. Most of the townsfolk feel threatened by Nathan’s presence, but Chance is determined to uphold the principles of the law and prevent the Burdettes from getting away with a serious crime. He is assisted by Dude (Dean Martin), a self-hating drunk, and puts up a fight against cowboys who are far more powerful than him.

For those who are fans of Hawks’s work, this will seem oddly similar to one of the screwball comedies that he made in the 1930s. I’m not saying that it has the zippy dialogue, fast pacing, or cannily modulated performances that were present in Bringing Up Baby (1938). I am simply trying to note that Hawks carries over a fascination with completely immoral, unrepentant characters and long, dialogue based scenes that are punctuated with short bursts of violence and action. This meant that I found this more interesting as an experiment of sorts. Can a Western properly function if it essentially functions as a chamber piece? The answer is complicated.

There were times when I was won over by the laidback, folksy charm of some of the chat. Yet I can’t help but feel as though this would have functioned better if the acting had been top notch. Wayne certainly has his defenders, and they argue that his screen presence and star power make up for his inability to transition between different emotions mid-scene. He had limited range and he speaks in an irritatingly monotone voice. He doesn’t provide the colorful characterisation that a Henry Fonda or a James Stewart might have brought to this project. If you’re going to make a film that’s mostly talk, surely you would want to hire a better actor to deliver all that dialogue. I kept feeling as though Wayne wasn’t quite conveying the gravity of certain statements that his character makes. All of this meant that the script, which might have been brilliant, wasn’t brought to the screen with the right amount of care and attention. I don’t care how big of a star Wayne was; he was never much of a thespian.

I think that it gains some power from the fact that Hawks’s direction is so unpretentious. It lacks the mannered quality that Godard would take on when he tried to produce homages to his work. There is an offhandedness to the way that this comes across that gives it more charm than other great Westerns of the period. Shane (1953) eventually becomes ghastly because it was directed by somebody who seemed to think that they were better than the genre that they working in and sought to supposedly elevate the genre by creating something that’s overblown and portentous. Unlike George Stevens, Hawks is secure enough in his abilities to refrain from announcing his greatness to the audience.