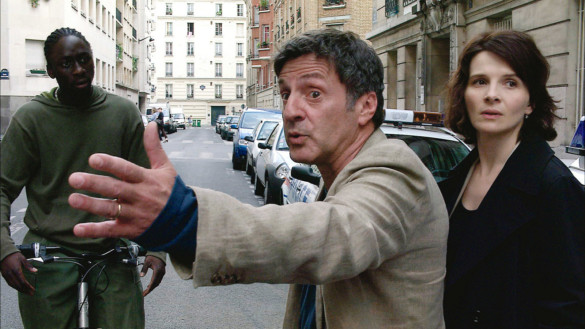 As per usual in this column, this week the Criterion Channel has afforded yet another opportunity to catch up with a director who is highly thought of but we may have missed out on. In this case, it is an Austrian filmmaker, Michael Haneke. Haneke is mainly known for difficult to watch films like the remake of Funny Games and The Piano Teacher. And frankly, this week’s film is not an exception to this rule. Caché, which will be leaving the service at the end of the month, is certainly difficult, but in different ways than other Haneke works.

If you simply read a synopsis of the inciting event of Caché, you might consider it a mystery. After all, in a slow, but stunning opening sequence, the camera allows us to see a home from the outside for a shocking amount of time. Just as we wonder if anything will ever happen, your screen twists oddly and the realization that you are watching a recording jolts you out of this almost painful process. Soon, we learn that married couple Georges (Daniel Auteuil) and Anne Laurent (Juliette Binoche) have been delivered a videotaped recording of the outside of their home with no other explanation. So, clearly, this is a mystery, right? It is not, and this is the brilliance of Caché in a nutshell. Haneke uses the trappings of that genre to build suspense while allowing the plot machinations to lead to shocking moments that you cannot possibly prepare for because of that focus.

Haneke seems disinterested in building the family life of the couple as anything more than a way to increase Georges’s stress and deteriorating state of mind. That is a shame because obviously, Binoche is a fantastic actress who could have handled so much more. This is not to say that the strained scenes between Georges and Anne don’t have an impact. They certainly do, but had we been privy to some happier times, the effect would have been all the more powerful. But despite casting Binoche, who is likely the most known commodity to American audiences, this is really about Georges, and especially his childhood.

Haneke, through this unsolved mystery, formulates a harrowing tale of how the events of our youth can follow us and even haunt us. The trappings of the mystery genre help create a palpable sense of dread, which focus the audience’s gaze in such a way that it is difficult to see anything else. Because of this, the flashes of Georges’ past seem to be just that, a flash that we should shake off so we can solve the mystery. But these disturbing flashes of a young boy, Majid (Malik Nait Djoudi), from Georges perspective unwittingly show us how our protagonist’s choices as a child are at the forefront of his mind. All it took to bring them to the surface is a reminder of Majid’s existence.

Caché also teaches a beautiful lesson in perspective. As we are focused on the mystery of who could possibly be recording these creepy films, we are shown Majid (Maurice Bénichou) as an adult. His removed countenance leads us to think it is him. After all, we find out, through Georges memories and confession to Anne that he certainly treated him poorly. But, after the events of the film play out, we can see that Majid has never truly recovered from the events of his childhood, either. Georges choices nearly destroyed him and being faced with his own personal devil is a shock to his system, which can explain his odd behavior at this first meeting of the two as adults.

Although Majid appears relatively late in the film, he is clearly the character upon whom the plot hinges. If through Georges recollections, you feel nothing for him, Caché, will be difficult, if not impossible to reach. Bénichou’s performance may be the best, and most subtle in the film, and, by its nature, is underplayed, until that moment. Majid is both the most devious and lonely character featured, and again, this is all dependent on your perspective. Majid is a completely different person as you’re watching the film play out, as opposed to as the credits roll. Caché offers a rarity. As a film, it purposefully fools you and offers you characters you believe that you cannot trust. And yet, after the film ends, makes you realize both that you were wrong and that you were focused on the wrong things. Caché does not demand a rewatch to understand these mistakes but will sit uncomfortably in your mind for hours after its ending.

Caché is not a movie you simply like or hate. It makes you question yourself, your own memories, and the purpose of genre as a whole. Can a mystery movie leave a mystery completely unsolved and yet be rewarding? Haneke toys with this perspective and feels almost as if he is mocking your futile attempts to figure out who sent the tape. Haneke is telling you that the tape is only the inciting incident and none of this matters in comparison to the trauma we can inflict on one another, especially early on in our impressionable youth.

Next week we wrap up December and the year with Bong Joon-Ho’s Mother!