Create with All Your Heart: The Stories of Studio Ghibli – ‘Nausicaä of the Valley of the Wind’

Few studios in the world have earned more critical acclaim than Studio Ghibli. Founded by the legendary filmmakers Hayao Miyazaki, Isao Takahata, and Toshio Suzuki, the Japanese animation studio developed a cult fandom throughout the 1990s, making the studio into event releases for animation fanatics. When you hear the word Ghibli, it’s likely you conjure up images of the fluffy, gray forest spirit Totoro. Yet their iconic caricatures extend far beyond Totoro and his spirit world friends. Niche American audiences know these characters, but 2021 offers us a true chance to engage with the studio’s incredible output.

When HBOMax launched in 2020, the presence of the Studio Ghibli collection was heralded as a watershed moment. For the first time, the studio’s massive output was accessible through a streaming platform. Millions of people across the country have unprecedented access to the Ghibli catalog, including your friends and family. Additionally, Hayao Miyazaki celebrates his 80th birthday today. The outpouring of love from fans and critics from around the world is no surprise. To celebrate Miyazaki’s landmark birthday and the incredible output from the studio where he created his great works, I’m looking back through the entire Ghibli filmography, watching each film in its order of release. Yet to get us started, it’s impossible to ignore the film that directly led to the creation of the studio, Nausicaä of the Valley of the Wind.

Often misattributed as Studio Ghibli and Miyazaki’s first film, Nausicaä remains an integral moment in the creation of the studio. Miyazaki had directed Lupin III: Castle of the Cagliostro in 1979, a critical success that lacked the robust box office associated with the property. The director was hired by Animage, an anime magazine, to develop his own manga released exclusively for the periodical. It did not take long for animation studios to see the potential of his story about a young girl surviving in a world ravaged by toxins in the soil and jungles of her world. The original Nausicaä manga ran in the magazine from 1982 through 1984, providing the storyboards for a future adaptation. Miyazaki would continue releasing new chapters until the mid-1990s, but the success of these initial issues provided him the clout to craft his second feature. Takahata, a successful director in his own right, joined the film as an executive producer. This collaboration provided the seeds of what would become the most successful non-English animation studio in the world.

Nausicaä of the Valley of the Wind takes place in a post-apocalyptic vision of Earth after the Giant Warriors destroyed civilization. Culture struggles to survive in this wasteland as the Toxic Jungle expands, swallowing towns and cities. Giant insects, known as Ohms, run wild in the jungles. Despite the environmental concerns, humans wage war on each other. In the Valley of the Wind, a young princess named Nausicaä rides the wind on her glider and makes scientific breakthroughs about the ecology of the planet. When the Valley of the Wind becomes overrun by the militaristic Tolmekia, Nausicaä must combat the elements, toxins, and humankind to save her people.

Adapting one’s own work is never easy. Yet Miyazaki’s fantastical tale was a work that drew from every source of art the director found worthwhile. In the director’s typical fashion, the kernel of the story was based on folklore. Despite the importance of gender roles within 1980s culture, Miyazaki drew from “The Lady who Loved Insects,” which follows an aristocratic lady breaking many of the norms of medieval culture. Yet Miyazaki’s worldly inspirations allowed him to borrow from universal studios from around the globe. The works of Asimov, Tolkien, Herbert, and more live in every frame.

These inspirations allowed Miyazaki to dream big, and Nausicaä stuns with its use of worldbuilding. Miyazaki developed his eye for scale and wonder early in the film, and the massive landscapes and vistas add high fantasy to the world. Ohms are stories tall, the biggest of which tower above the jungles. Nausicaä looks puny, even as she rides her glider in circles around warships and creatures. The visual disparity between Nausicaä, the creatures who destroyed society, and the kaiju-like creates that roam the Earth creates the underdog narrative that allows us to connect to our heroine. The forest and jungles bear a striking resemblance to Mirkwood and Lothlórien. The Ohms should be considered the first, and best, exploration of bringing Dune’s Sand Worms to life. Miyazaki and Takahata invent a new visual language in front of our eyes, an aesthetic that would inform the house-style of Ghibli for decades. 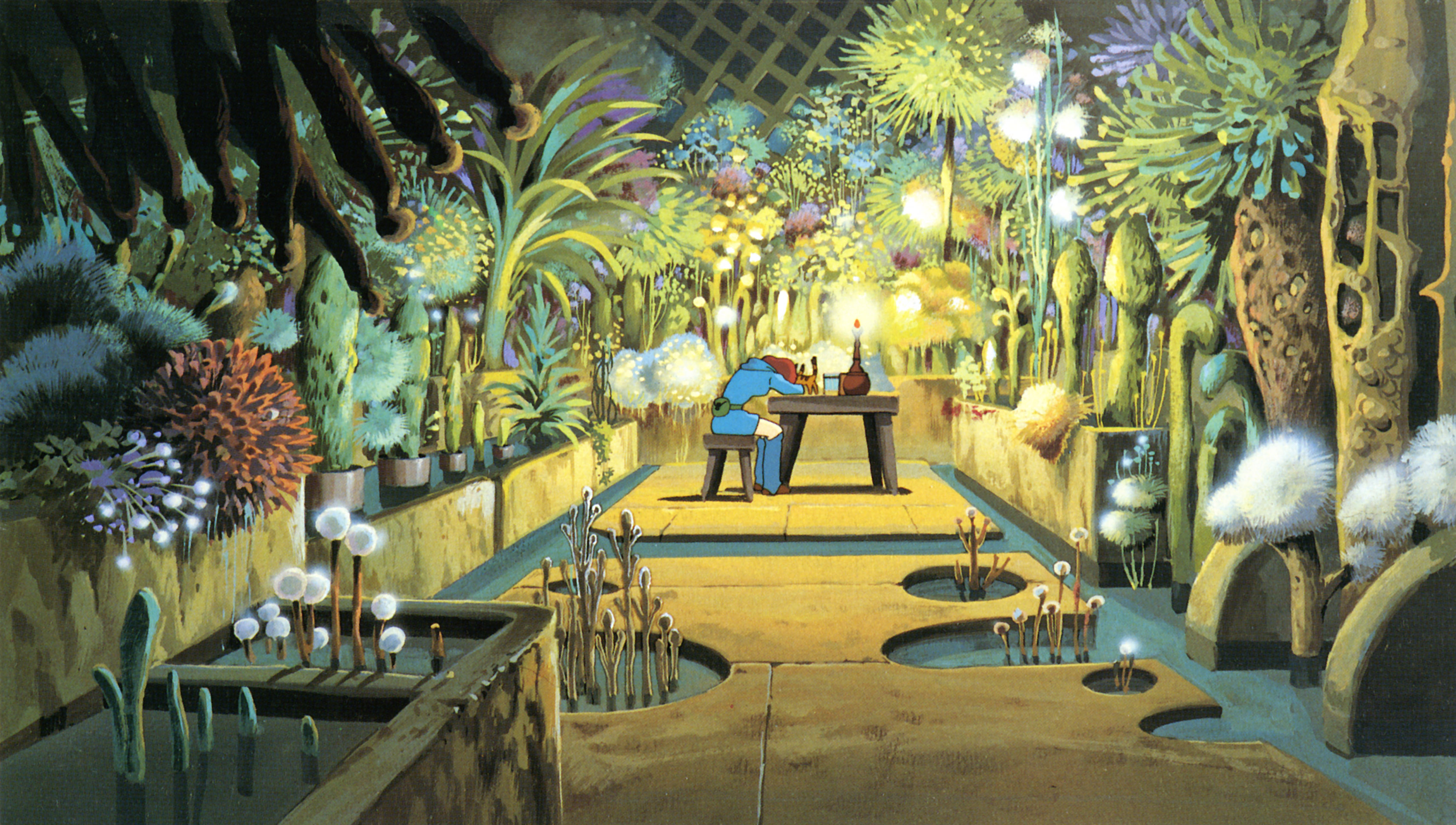 Miyazaki’s story pushes gender boundaries at every turn as well. He directly confronts narratives of prophecy, especially those that assumed heroes could only be men. Despite the presence of antagonistic women in the story, he avoids directly pitting the women against each other. On one hand, we have Nausicaä searching for answers to why the world is broken, even putting herself in danger from the jungle. She lives in peace with the seemingly violent world around her. In addition to her scientific observations about the world, she dresses and acts like a scrapper, tossing off her royal position in image alone. Yet her actions are always meant to save and serve her people. In that way, she’s not too different than the “antagonist” Kushana, who believes herself to be the savior of the world. She has trained her whole life to defeat the Toxic Jungle and the creatures that inhabit it. In many stories, her win-at-all-costs approach is greeted as heroic, even if it hurts people in the process. She provides a wonderful foil to the empathetic Nausicaä, yet Miyazaki develops her in a way that it’s easy to identify with her actions.

Beyond the visual splendor of Nausicaä lies a basic human ethos that is impossible to ignore. Nausicaä remains one of the most humanistic characters ever put to screen. Beyond all else, she believes in the power of humanity to conquer any challenge we face. The message of a world destroyed by the humans that poisoned it, only for those humans to fight each other can feel overwhelming prophetic at times. Yet Miyazaki offers us a way out. By prioritizing empathy for others, whether they are your neighbor, enemy, bug monster, or fox-squirrel, Nausicaä builds relationships. The connections we make can change the world and provide hope for our future. It’s a message that remains as timely in 2021 as it was nearly forty years ago.

Miyazaki lays out many tenets of what it means to be a good person in this second feature. The deeply emotional tales he will go on to tell seemingly stem from this concept. Despite his remarkable visual storytelling, he never loses sight of the importance of heart and humanity in the face of adversity. Takahata will take this idea and run with it, resulting in some of the most heartbreaking films ever made. After the instant success of Nausicaä in 1984, Miyazaki and Takahata would gain the support to found Studio Ghibli in 1985. The two masters at the center of the company would provide an artistic center for Ghibli to thrive. The resulting studio would change cinema, gender politics, and the world of animation for decades.