Classic Review: ‘The Rock’ Is Starship Troopers Without The Irony 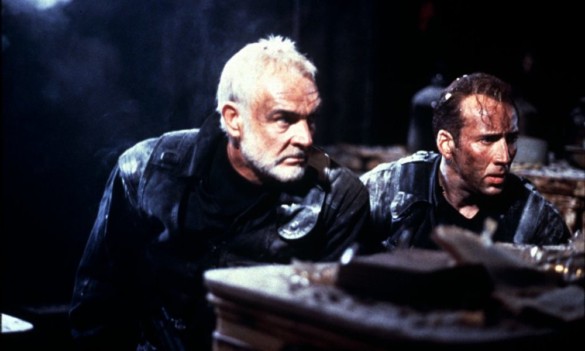 Synopsis: An FBI agent and a criminal have to learn how to get along when they are tasked with taking down a rogue military General who is holding tourists hostage on Alcatraz Island.

The Rock (1996) is one of those films that invites questions about the political views of those who made it. It feels like a military propaganda film that was made under the direction of a fascist government that abhors democracy and wants to convince the masses that all non-violent men are doltish imbeciles. It’s almost like watching Starship Troopers (1997) without any of the irony. It really does feel like it exists to recruit young men into the military and turn people against politicians who don’t think that the national defense budget needs to be increased by 75%. That makes it terrifying on many levels and you begin to wonder whether Michael Bay is indoctrinating his target audience or simply playing on pre-existing prejudices and beliefs. The idea that the average American in the mid-1990s was a bloodthirsty, warmongering chauvinist reveals a lot about how somebody like Donald Trump could get elected in the mid-2010s.

Even in 1996, Bay was known for the misanthropic touch that he brought to action blockbusters. In Bad Boys (1995), he presented the two cops at the center of the story as idiotic dimwits who deserve to be looked at with contempt. The Rock seemingly allowed him to progress beyond viewing every character on-screen with disgust. This time he was working with a screenplay that gave him the opportunity to valorize the military. Brigadier General Francis Hummel (Ed Harris) is viewed with warmth and affection, as he attempts to extort the government in order to provide the family members of slain American soldiers with financial compensation. Bay seems fine with the fact that Hummel takes a group of tourists hostage and leaves them in prison cells on Alcatraz Island, without any food or water to sustain them. Hummel is tough, stoic, and willing to be a real American. Unfortunately, that seems to involve using violence to solve all problems.

Hummel is up against the U.S. government, and they refuse to yield to his demands. He threatens to unleash VX-gas rockets on San Francisco if they don’t pay him a $100 million ransom. The FBI deploys Stanley Goodspeed (Nicolas Cage) to break into the prison and take Hummel out. He is teamed with folksy ex-criminal John Patrick Mason (Sean Connery), who is famous for having escaped from the prison. The two men initially struggle to get along but find themselves bonding as they overcome various obstacles together. When it finally comes time to complete their mission, they find themselves siding with Hummel. This causes a great deal of conflict and they realize that the world is now against them.

Thematically, there isn’t much going on beyond the military propaganda and opposition to the government. It mostly aims to entertain the audience with a series of loud explosions and frenetic camerawork that ensures that most scenes move along at a fast pace. Character development isn’t really a concern and the movie stars in the cast are asked to show up and do their thing. Cage is neurotic and weird, Connery is a cantankerous old man and Harris is businesslike and efficient. On one level, you do have to admire the way it was constructed. Producers Don Simpson and Jerry Bruckheimer had found a way to repackage the traditional disaster movie formula for a 1990s audience and The Rock faithfully follows along with it. It must have been easy for them to piece this together and from a purely Capitalistic standpoint, it is hard not to admire their ability to predict what the audience wants. From an artistic standpoint, it is impossible not to want to see something more experimental and less willing to glamorize violent behavior.

One of the most frustrating aspects of Bay’s work is that it feels so derivative and unoriginal. The Rock feels very similar to all of the other action blockbusters that were released during the 1990s. It isn’t as campy as Face/Off (1997) and it doesn’t feature a scene in which a plane crashes into a fireworks factory. There is something disappointingly conventional about it and the sense that Bay, Simpson, and Bruckheimer missed out on an opportunity to try something new. They could have smuggled something slightly subversive into this big budget extravaganza. Rather than making a mindless crowd pleaser that happens to contain an insidious message, they could have done something unexpected. Critics in 1996 were probably forced to see dozens of action flicks that looked and sounded exactly like The Rock. That is probably why it received such a critical drubbing.

All these years later, it is difficult to argue that the cinematic landscape has changed that much. The Rock still feels generic and lacking in any of the flourishes that distinguish hacks from legendary auteurs. We won’t be talking about The Rock in twenty years’ time and some other hack will have taken on his role within the traditional framework of Hollywood. If The Rock were a glorious failure, it might have more integrity.