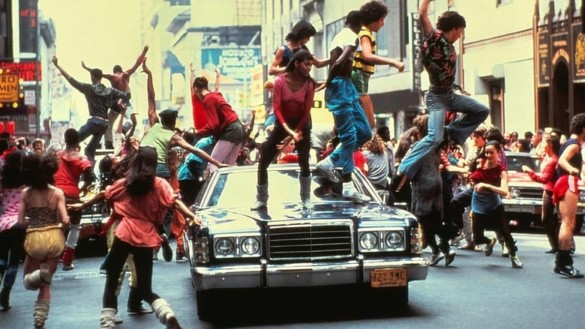 Synopsis: Young men and women audition for coveted spots at the New York High School of Performing Arts. Those who make the cut discover that it takes a lot of hard work to become a star and sometimes difficult decisions have to be made.

Musicals in the 1980s were a very strange beast. They were no longer a genre that could reliably bring in money and were generally viewed as a risky investment. A film like Grease 2 (1982), which much have looked like a surefire blockbuster on paper, ended up becoming box office flops and the targets of snarky comments from critics. Dance movies began to take over and the erotically charged Flashdance (1983) made a traditional musical like A Chorus Line (1985) look outdated. This is the environment that Fame (1980) came out in and it’s remarkable to note that it succeeded against all odds. Perhaps this was because Alan Parker tried to turn this into a gritty, serious character study about kids who will face consequences if they don’t succeed as entertainers. It’s more downbeat than your average teen drama and that’s why it initially appealed to me.

It follows the lives of several troubled teenagers over four years, as they attend the High School of Performing Arts in New York City. We primarily focus on the shy, untalented Doris Finsecker (Maureen Teefy) who is accepted into the school because she has no other options. She befriends Montgomery MacNeil, Paul McCrane, and when he comes out to her, she is supportive of him. The two face various obstacles as they try to succeed in subjects that ask a lot of them. We also follow the ups and downs that musician Bruno Martelli (Lee Curreri) experiences. He wants to push boundaries but he is held back by the fact that his tutors emphasise a focus on classic music. Leroy Johnson (Gene Anthony Ray) is a dancer who struggles with the workload that he has been handed. All of these high school students, and others, are seen as at-risk adolescents who can find comfort and safety through the performing arts.

The script is one of the biggest problems here and it ensures that Parker’s efforts to ground this story in a harsh, bracing reality, are unsuccessful. All of the main characters are stock archetypes and we can tell how each of their storylines are going to wrap up. Perhaps if the script had really committed to being about one or two of them, there would have been time to wring pathos out of one of their character arcs. As it is, we feel like we’re seeing a season of television that has been squashed into 133 minutes. Characters have to tell us exactly how they feel so that crucial aspects of their emotional development can be communicated within one scene. They can’t deviate from any of the clichés, because then they wouldn’t be able to spread an inspiring message about art fixing all problems.

Maybe I would have liked the script more if Parker’s realism hadn’t clashed with the sunny sentimentalism of the final scenes. If a Norman Jewison or a Richard Attenborough had helmed this project, it might have just been a happy-go-lucky celebration of the power of dance. The scenes where the teenagers spill out onto the streets and rock along to some music wouldn’t have felt like a bizarre diversion from the real story. If there had been more emphasis on the musical numbers and less plot, I could have cut the screenwriters more slack for producing such thinly drawn characters.

What you do get out of having Parker as a director, is a couple of wonderful sequences in which he is able to draw links between all of the different characters. The opening audition scenes are full of energy and we immediately get a sense of what drives each of these kids to want to attend this school. Nothing that Parker achieves is subtle but he does provide us with close-ups of shaking hands and dilated pupils that manage to get across the feeling of stress and anxiety. He also proves to be a master of pacing during these opening scenes. He understands that we need to spend a bit more time with Finsecker, as she is both hesitant and subconsciously excited by the thought of performing for others. He’ll rush us through the auditions of characters who have less complex motivations and then quickly circle back around to the people that we’re more invested in. We never find ourselves getting lost amidst all of the shifting around and Parker seems to be supremely confident and in control during this section of the film.

Those are the things that differentiated Fame from other musicals of this period. It doesn’t drag and Parker does seem to have a legitimate point of view on so many of the topics he’s touching on. He has to contend with the fact that everything has to be moved through very quickly but he does linger on individual movements whenever the film breaks out into a rehearsal scene. He has an appreciation for the human form that helps him to overcome an occasional overemphasis on the bland choreography. There’s so much to love here, it’s just a shame that Parker couldn’t quite pull all of it together. This is an unbalanced mess at a lot of points and that stops you from fully enjoying its occasional moments of greatness.