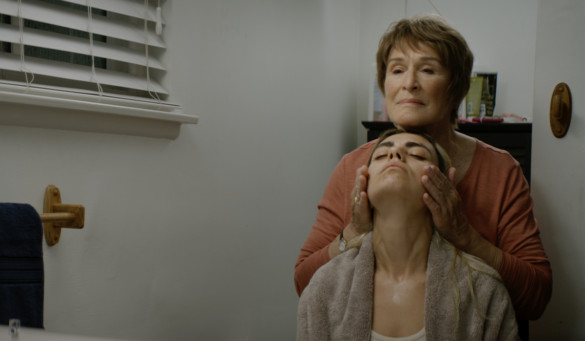 Synopsis: 31-year-old Molly begs her estranged mother Deb for help fighting her drug addiction. Despite all she has learned over a decade of disappointment, Deb throws herself into one last attempt to save her daughter.

When we meet Molly (Mila Kunis) in Four Good Days, she is frantically knocking on the door of her mother’s house Deb (Glenn Close). Haggard and dirty, she begs for a place to stay. She has been living under a bridge, she is trying to get clean, and she is now determined to get help for her drug addiction. This time she means it, she says. However, an incredulous Deb has gone through this too many times to budge easily, leaving her outside for the night. This painful and tough exchange is our introduction to the lives of a mother and daughter that have been dealing with Molly’s disease for the last 10 years.

In an unavoidable decision to help her, Deb lets her into her life one more time, and together they start a desperate and drastic journey of recovery. After trying everything – including 14 stints in rehab – Molly accepts to take a monthly injection that will work as an opium antagonist. The only challenge is that she must be clean for at least a week to start the treatment. With four days covered, she must go through an ordeal of four extra days.

Four Good Days, co-written and directed by Rodrigo García, is based on the Washington Post article How’s Amanda? A Story of Truth, Lies and an American Addiction, which at the same time is based on a true story. This piece exposes the problem of drug addiction in the United States through the story of a woman’s dependence on painkillers that soon after evolved into heroin addiction. The movie works as a faithful adaptation of the article, dramatizing some of the most critical passages of a harsh depiction of this problem in America.

More than focusing on Molly’s journey, though, the adaptation centers on Deb’s experience and struggle. This is Deb’s story, not Molly’s. We follow her when she leaves Molly alone to go to her job, we witness her anguish when she realizes that she forgot her purse at home at the easy access of Molly, and we see her when she goes through an agonizing uncertainty after Molly leaves her home after a heated argument. Four Good Days explores the heartache of those surrounded, but not afflicted, by addiction.

While the story hits familiar territory – it reminds us of the recent efforts Beautiful Boy (2018) and Ben is Back (2018) –, Four Good Days explores themes related to the experience of being a woman in her 30s going through addiction. In this regard, this film offers a unique perspective on issues related to societal expectations – especially explored through Deb’s backstory and Molly’s triggers –, past resentments and the pressure of being a mother while being an addict (Molly has two children that live with their father).

It is also filled with curses, shouts, and snarky comments that show the eroded relationship that exists between mother and daughter after a long and exhausting struggle. Molly is mean and manipulative, while Deb is obsessive and desperate. The film is filled with a suspicious atmosphere of deceit that captures the instability of an addict, the unreliability of their character, and the anguish of those around them. Despite this, the story insists on being inspiring, even going further than the original material with its positivity and resoluteness.

Nevertheless, the main triumph is the acting pair at the center of the film. Even though the script is dramatic and over sentimental, both actresses make it work. Some of the dialogue would have fallen flat on the lips of less committed actors, and while some scenes could have been easily omitted – an awkward conversation about a trans woman feels unnecessary and opportunistic –, Kunis and Close improve the film. Several of their discussions expand the addiction drama into a story of broken relationships and wasted opportunities.

Mila Kunis offers her best performance since Black Swan (2010) and reminds us of her dramatic skills. Her physical transformation is striking, while her volatility is realistic. She exudes a feeling of uncertainty that never allows us to trust her character.

For her part, Glenn Close is memorable as the pushy and annoying mother that does not know what to do to help her daughter. She is reliable, heart-breaking, and critical while offering hurtful comments that may inspire laughs from the audience. Close is subdued when Mila Kunis is explosive, and she is unpredictable when the rest of the cast is apathetic. She wears the gentle and exhausting mantle of being a scared mother in a helpless situation.

Four Good Days is a recognizable drama that is memorable because of its committed cast. Mila Kunis and Glenn Close bring to life a real story of devotion and resilience. While its façade may be conventional, the struggle and despair that are conveyed on-screen are affecting, celebrating a complicated but unbreakable bond between mother and daughter.