Movie Review: ‘The Mitchells vs. the Machines’ is clever, funny and even has a #JDTear or two 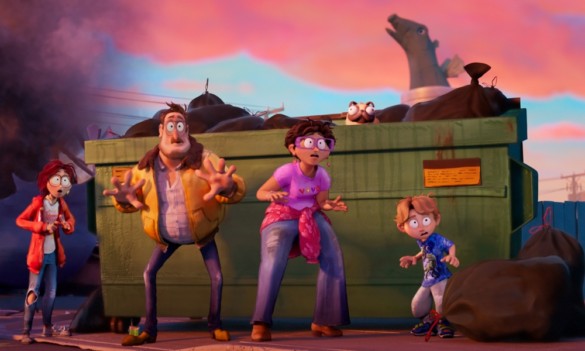 Synopsis: A quirky, dysfunctional family’s road trip is upended when they find themselves in the middle of the robot apocalypse and suddenly become humanity’s unlikeliest last hope.

This will come as no shock, but The Mitchells vs. the Machines is another hit for Lord Miller Productions. This is the same house as the Oscar-winning Spider-Man: Into the Spider-Verse, both Cloudy with a Chance of Meatballs‘ and both Lego Movie movies, all good to very good efforts. Perhaps you argue the sequels aren’t slightly lesser, but the first Cloudy with a Chance of Meatballs and Lego Movie are right up there with some of the best animation of the last decade as well. Regardless of who’s directing them (and no slight to Michael Rianda and Jeff Rowe), Lord Miller Productions is showing prowess that equals Pixar and Laika Studios. And with The Mitchells vs. the Machines, that trend very much continues.

The Mitchell family is your normal dysfunctional family. Each member has their idiosyncratic identifier that makes them quirky and unique. For Katie (Abbi Jacobson), she wants to be a filmmaker. Her short films are clever and fun, despite the low-budget quality. Her father on the other hand (Rick, played by Danny McBride) is a naturalist who loves the outdoors and working with his hands. His ignorance to computers and technology creates a wedge between he and Katie. So as Katie prepares herself for college, Rick is worried that she may fail and wants her to have a backup plan. This, of course, leads to a quarrel that strengthens the wedge between them. To help remedy this, Rick decides to take everyone on a road trip so they can bond one last time as a family.

There’s only one problem. Mark Bowman (Eric André) has invented an AI that decides to take over the world when he built a new, slicker AI to replace the old one. PAL (voiced wonderfully by Olivia Colman) gains control over all machines with a PAL computer chip – and in this world that’s most machines – which leads to a global apocalypse of sorts. The idea of a robot uprising is a classic cinematic trope, as well as in recent years the notion of artificial intelligence and the dangers it presents, however, The Mitchells vs. the Machines is able to convey its ideas in refreshing and clever ways. Technology and social media companies selling data for profit is a hot button issue in today’s social discourse, but the film isn’t interested in being a biting commentary on the issue. Sure, it has its warnings, but mostly those ideas here are playfully antagonistic.

One flip of the coin that’s very interesting is Eric (Beck Bennett) and Deborahbot 5000 (Fred Armisen), two robots who are partially destroyed in their pursuit of the Mitchell family. As a side effect, their wiring is reconfigured and can bypass PAL’s orders. They become secondary members of the Mitchell family and offer up some of the film’s best comedy in the process. A heartwarming throughline on its own, but the distinctive traits demonstrated by Eric and Deborahbot 5000 are simultaneously appropriate thematically.

A transition I’ll use to talk about the fundamental throughline at the heart of this film between Katie and Rick. For as hilarious as The Mitchells vs. the Machines is at times, it’s equally very moving. Rick may not be able to relate with Katie, but the film (through various flashbacks) show us that Rick does very much love his daughter and would do anything for her. The scenes of Rick reminiscing about young Katie rendered more than a few #JDTears. On the same token, Katie struggled to relate to her father, but thanks to you dinosaur loving brother Aaron (Michael Rianda), she slowly but surely starts to learn more of Rick’s perspective. That duality is compelling, but it’s interesting how the film examines it in editing and storytelling. I don’t want to give too much away, but the filmmaking goes out of its way to heighten the parallels between Rick and Katie. Not to mention, there’s a great gag with Linda (Maya Rudolph) near the end that had me in stitches as well.

The Mitchells vs. the Machines isn’t re-inventing the wheel narrative, but it does take classic tropes and reinvigorates them with intuitive creativity. Much of its style will remind you of Cloudy with a Chance of Meatballs, but perhaps with a pinch of Scott Pilgrim vs the World. The animation is colorful and sharp. The design of PAL is simple, yet effective. Despite being first-time directors, Rianda and Rowe have a firm control over every scene and how it’s all rendered.

It likely would have made for a great theater viewing experience, but Netflix has a winner on its hands. Lord Miller Productions, like many of its rivals, has a formula that they know how to mold, and that is very exciting for animated movie fans. It will be very interesting to see what they do next, but for now, go see and enjoy The Mitchells vs. the Machines.