Chasing the Gold: Why ‘The Power of the Dog’ Should Win Best Picture 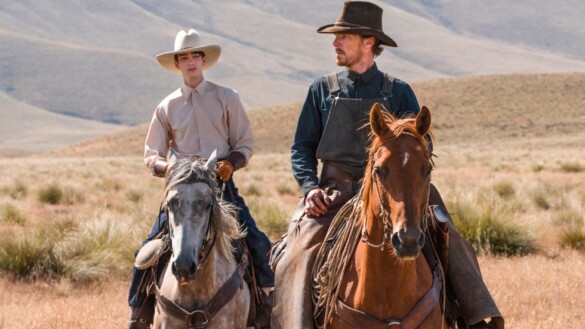 There’s a scene in The Power of the Dog in which Phil Burbank, played by Benedict Cumberbatch, kneels in a small glade by a body of water. He is stripped to his waist and he slowly pulls a yellow handkerchief from the front of his pants. Phil languidly, achingly runs the handkerchief across his naked chest and his rough, weathered face. He’s delicate with the object, painstakingly careful with what it represents to him and as slowly as it is drawn across his face, the monogram BH is revealed and there is confirmation of everything we have suspected about the nature of Phil and Bronco Henry’s relationship. It’s confirmation that while Phil is utterly reprehensible, he’s also a human with needs, desires, and deep complicated emotions. The Power of the Dog is filled with slow, beautiful filmmaking that reminds us why we love the medium and why it is unique among storytelling mediums.

The Power of the Dog wades into the complicated cruelty of humans. With a visual panache that breathes subtext into every movement of the film, director Jane Campion and her crew have not only captured a period, but a zeitgeist as well. We grapple now, as the people in Phil’s orbit then, with men afraid their place in the world is being usurped. Yet, as often happens with these men, as loud as they may be, their belly will eventually be exposed and they will find the world prefers the new way and they can accept it or be left in the dust.

The narrative suits the paradigm shift in viewing habits as well. The Power of the Dog is a film produced by and streaming on Netflix, the portent of the end of the traditional film going experience. Yet, a great film doesn’t require a certain size of screen to make an impact. A great film requires our eyes to be open to what it has to offer and The Power of the Dog has so much to offer. From its rich textured close ups, to its awe-inspiring wide shots of gorgeous vistas, The Power of the Dog is a masterpiece that reminds us that a visual medium can convey as much or more information as text spoken or written. The film’s plot is layered, it’s performed expertly by its entire cast, and brings a depth of sound that heightens our sense of tension and desire. The Power of the Dog is exquisite and proves why Jane Campion is one of our greatest living filmmakers. The Power of the Dog deserves to represent the 2021 film year as its Best Picture.