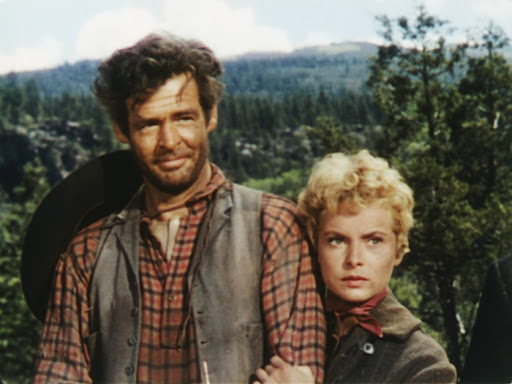 Released in 1953, Anthony Mann’s The Naked Spur is a somewhat overlooked Western from that era. Although, perhaps not as revolutionary in terms of its themes and context as say, Johnny Guitar (1954) or The Searchers (1956), there is still a lot of interesting stuff happening here that we should examine. The Naked Spur has a simple, straightforward narrative with only a few main characters, however, it is this simplicity and the intimacy between the main characters which makes The Naked Spur a fascinating film which touches upon the paranoia of McCarthyism and the Cold War, just who is telling the truth and who can you trust. Has everyone going an alternative motive or are they as honest as they claim to be?

Starring James Stewart, the film’s poster declares that the picture is packed “with technicolor thrills”, this is certainly true! There are many tense thrills throughout The Naked Spur, which on the surface seems like the simple tale of good vs. bad but questions in terms of morality and virtue arise upon further inspection. The film is a vibrant example of the marvelous beauty that was technicolor, taking place in the lush surroundings of the Colorado Rockies, a place which still seems untouched by man. William Mellor’s cinematography doesn’t fail to capture the awe of the location, and the use of wide-shots are impressive. We get the impression of the vast isolated world that our main characters find themselves in, implying anything could happen out here and nobody else would know about it.

Steward plays Howie Kemp, who is on the hunt for a man named Ben Vandergroat (Robert Ryan) who is wanted in Abilene for killing a marshal. Howie runs into an old prospector called Jesse Tate (Millard Mitchell), at first we are unsure whether either man can be trusted, both of them appearing closed off and reluctant to open up to each other. Things change, when Howie shows Jesse the wanted poster and, assuming Howie is part of a lawful pursuit, Jesse accepts twenty dollars to join in the manhunt. The two begin their hunt, and come across a dishonorably discharged Union soldier, Lieutenant Roy Anderson (Ralph Meeker), who offers to help climb up a rock face when Howie faces to scale it.

Together, Roy and Howie manage to capture Ben, discovering that he’s not alone and has a travelling companion in the form of Lina Patch (Janet Leigh). Both Ben and Lina agree to be returned back to Abilene and seem co-operative. Unbeknownst to the three men, Ben is set in pitting his captors against each other, and isn’t afraid to use Lina as a pawn in his game. Lina is reluctant to be any part of this, and after nursing Howie (he receives a gunshot wound when the party is attacked by Native Americans), she falls in love with him. So, begins a treacherous journey across the landscape.

What makes The Naked Spur so fascinating and gripping to watch is the power dynamics at play between the five main characters. Ben is a master manipulator, a trisker, who works out each of his captors’ weaknesses and uses that against them. He realises that Roy is a womanizer, (possibly a rapist too, although that’s only hinted at) and has very little respect for women in terms of their boundaries and consent. So Ben uses Lina’s femininity to get Roy on his side, and when he realises there’s affection between Howie and Lina, he also uses this to his advantage. He weaves a story about knowing the location of a gold mine to Jesse, and keeps mentioning how Howie lied about the bounty of $5000, so tensions run high between all three men. Robert Ryan seems to be having a blast here as Ben, and his character is by far the most interesting and complex of the five main characters. At first we see Ben as the comic relief, he’s not presented to us as the typical Western antagonist, but as the film develops, Ben’s true sadistic and manipulative nature is revealed. He has no real respect for Lina, ordering her to rub his shoulders and speaking to her in a degrading manner, treating her as if she was his property.

James Stewart is also great here as Howie, a man with a hidden, tragic past who at first seems very much in control of the situation. However, as the journey progresses, what takes place becomes a battle for authority and dominance, resulting in a stand-off between Ben and Howie, which never one really seems committed to acting out. Howie is put through challenge after challenge, but even when he’s shot in the leg, he still remains determined to get Ben back and claim his reward. There’s much to admire in Howie’s determination, but the film also points out how Howie has become obsessed. In the end, Howie has to make the ultimate decision, to let Ben and the past go, or to remain trapped in this vicious cycle.

Unfortunately the film’s gender dynamics feels very dated which did affect my overall enjoyment of the film. Lina starts off as a very interesting character, she’s dressed in very mascline clothes throughout the entire picture, and isn’t afraid to fight back when they’re initially captured. Aside from Howie, all the other men treat her in a really sexist and borderline misogynist manner with Jesse repeatedly calling her ‘girl’ and ordering her to get supper ready. The relationship between Lina and Howie seems rushed, with the film only taking place over a few days, it seems unlikely that such an intense relationship between the two of them could develop at the speed that it does.

Sam Rolfe’s and Harold Jack Bloom’s screenplay received an Oscar nomination, which they rightfully deserved. The screenplay is tight, and with a runtime of 91 minutes, not a single minute is wasted. The picture’s success at the Box Office ensured three more Stewart-Mann collaborations, including two more westerns (The Naked Spur was the third of five Western collaborations for the duo). It’s definitely a film worth seeking out, perhaps not the best Western I’ve seen so far, but still a pretty damn enjoyable one!