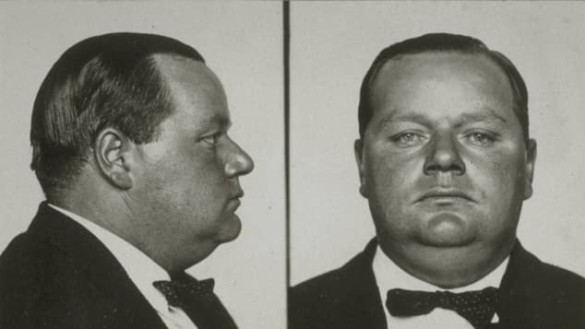 Part of Hollywood’s culture and lore has always included events that publically questioned Hollywood as a moral business. It is a sector of entertainment, but the arts have always included stories of sexual intrigue, dangerous vices, and agendas that have driven the business since its inception. But when it involves death and personal ruin, it becomes the fodder newspapers and social conservatives to speak about. These things led the first Moral Majority (before Reagan’s came to power in the 80s) to claim the industry as an indecent place and forced studios to write morality clauses in contracts and be aware of content created by the directors. These are some of these major scandals 100 years ago that endangered Hollywood as a whole.

The Trial Of Fatty Arbuckle

Roscoe “Fatty” Arbuckle was among the first great comedy giants in the 1910s, playing a key role at Keystone Studios that included Marie Dressler, Harold Lloyd, Mable Normand, and Gloria Swanson. When Charlie Chaplin came to Hollywood, it was Arbuckle who mentored him into the medium Chaplin would dominate for the next two decades. Arbuckle also met Buster Keaton and Bob Hope, giving them early gigs that lead them to stardom. He was the highest-paid actor in Hollywood contracted to Paramount when in 1921, Arbuckle was charged with the rape and manslaughter of an aspiring actress who was in a party.

The first two trials ended in a hung jury while the third found him acquitted with a public apology by the jury. However, the trial was widely followed and William Randolph Hurst’s newspapers published sensationalist stories that depicted Arbuckle as a fiend who deserved the electric chair. Studios banned Arbuckle from working with them and theatres didn’t show his movies again, even after he was acquitted. Arbuckle would get work as a director using the pseudonym William Goodrich and was even given support by Keaton in his movies. He had just signed a deal with Warner Brothers and was making a comeback under his own name when Arbuckle suddenly died of a heart attack in 1933, aged 46.

Multiple actors would die at a young age that would also face the scrutiny of tabloids and Christian groups still parading their victory to legalize Prohibition on the whole country. Serving as cautionary tales of why alcohol was bad, the deaths of Olive Thomas and Wallace Reid, plus the attempted suicide of Audrey Munson would be cited in forcing change by the studios. Thomas died in 1920 while on vacation with her husband, Jack Pickford, after accidentally drinking her husband’s medication which caused fatal inflammation of the kidneys. Yet, stories of alleged orgies, alcoholism, and that her death was a result of foul play put an unfair spotlight on Pickford’s and Thomas’s personal life.

Reid once referred to as, “the screen’s most perfect lover,” was part of the Famous Players-Lasky Corporation, the predecessor to Paramount Pictures. A train crash in 1919 caused serious injuries which led to Reid becoming addicted to morphine to get through shooting his later works. His heavy workload exacerbated his addiction; Reid went to a sanitorium to get sober, but he died in 1923, aged 31. Munson was a famous model in New York who became famous for posing nude in  films such as Inspiration, Purity, and Heedless Moths, giving her the nickname, “American Venus.” But her affair with a married doctor who would later be convicted and executed for murdering his wife in order to marry Munson made her unhirable. She would survive a suicide attempt by poisoning and would spend the rest of her life in an asylum until her death in 1996, aged 104, with virtually no visitors in her time institutionalized.

The killing of director William Desmond Taylor in 1922 was a much bigger shockwave in Hollywood than the others mentioned. One of the more well-known directors in the 1910s and early 20s, Taylor’s death remains of the most notorious cold cases in the industry. There are multiple suspects and motives that could have led to his death, but the media circus and speculation shrouded the investigation. In 1924, the death of director Thomas Inge on the boat of William Randolph Hearst put the famous media tycoon in a compromising spot. Ince, famous for his Western pictures in the silent era, was negotiating with Hearst on a business deal when he suddenly died of what was ruled to be heart failure. But rumors from conflicting accounts of Ince’s last days brought on allegations of a conspiracy to kill Ince that would inspire the play and film, The Cat’s Meow, directed by Peter Bogdonavich.