Movie Review: ‘The Lighthouse’ is a fascinating examination of isolation and mania 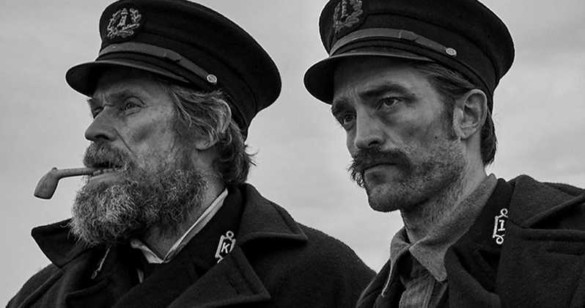 Synopsis: The hypnotic and hallucinatory tale of two lighthouse keepers on a remote and mysterious New England island in the 1890s.

“Dwellers by the sea are generally superstitious; sailors always are. There is something in the illimitable expanse of sky and water that dilates the imagination.” – Thomas Bailey Aldrich

Robert Patterson and Willem Dafoe play two sailors, Ephraim and Thomas, who go to an island off the coast of New England to be wickies, or lightkeepers, in the 1890s. Ephraim is the young rookie who reveals that he used to be a logger in Northern Canada and Thomas is the veteran boss with his scruffy accent and hard-nosed attitude towards Ephraim in doing basic work around the island. The job requires them to spend four weeks there, but as time goes on and a storm leaves them stranded them longer, it becomes a game of wits and attrition towards each other and towards the mystery of the waves and lighthouse itself.

Ephraim is young and detests Thomas’ demanding work, which clears shows in his struggle to do upkeep such as emptying chamber pots and refueling the light. He doesn’t understand the superstitions of Thomas, including one that foreshadows the events, and dismisses the warnings of Thomas about what desolation on an island can do to a man so easily. Slowly, it grips Ephraim and Thomas as they divulge their secrets and run amok through the amounts of liquor that fuels them in the worst of the storms.

Robert Eggers’ (The Witch) sophomore effort is one that has to sink in a bit before you make a judgment about the film. It is one that has you more to think of when going through the slow decline of each character’s sanity and what it may mean. This isn’t a pure horror film to scare you out of your wits. It is an art film, shot in black-and-white and formatted in the 1.19:1 aspect ratio like a box. For the viewer, you have no choice but to look directly at the two characters and their maniac fall to when they come face-to-face, and that’s for the better because Patterson and Dafoe are like two boxers slowly jabbing and then raining blows in the later rounds of a fight.

Patterson continues to go as far away as he can from the Twilight era with his bold turn while Dafoe continues his streak of chances in characters that are soul-sucking creatures, trying to balance reality and the imaginary. Dafoe oozes the ecstasy Thomas has working hard on Ephraim, albeit short of masochistic. His accent can be heavy at some times, but it makes you feel like you are looking up at a giant. Their emotions pour out as they try to tower one another and fight to be the last man alive, let alone standing. It can get a bit rough down the stretch heading to the climax, but in its Theater of the Absurd manner, with all the subtle dark humor (and flatulence), Eggers has it all out for us to fly over like a flock of seagulls.

Hear our podcast review on Episode 349: