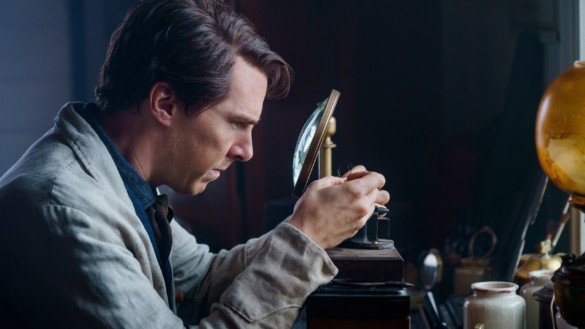 Synopsis: The dramatic story of the cutthroat race between electricity titans Thomas Edison and George Westinghouse to determine whose electrical system would power the modern world.

The Current War is a historical drama, telling the story of the rivalry between Thomas Edison (Benedict Cumberbatch) and George Westinghouse (Michael Shannon). It covers the years soon after Edison patents the incandescent lightbulb around 1880, up to the Chicago World’s Fair of 1893. This film does come with some drama and feelings of negativity. It was originally released at TIFF in September 2017 and made its way around the festivals. This film was originally produced by Harvey Weinstein but after the numerous allegations against him started to come out he “left” the project and remains uncredited. The film went into limbo, was sold and reedited, then finally received its theatrical release two years later. I read a lot of rumors about the festival release of this film being “so bad no one would take it”. I have not seen that version of the film, only the director’s cut so this review will be based solely on that.

On paper, The Current War sounds like it will be a decent movie; it has an amazing cast and interesting story. But, like many biopics, it seems to fall flat in its storytelling. Just because a historical figure did something amazing doesn’t mean it will translate that way on the big screen. I find the rivalry between Edison and Westinghouse interesting, I learned things I didn’t know before I saw the movie, but it doesn’t make for a thrilling, “need to know what happens” movie. It’s not a bad movie, it definitely doesn’t deserve all the hate it’s getting, but it isn’t anything spectacular either. Another complaint I have is very common when real historical figures appear in film- the actors didn’t look anything like the real people they were portraying. Cumberbatch is around the same age as Edison was during this time, but Edison went grey in his late 20s/early 30s. He was often nicknamed “The Old Man” due to his appearance and demeanor. There are many photographs of Edison so I don’t know why they didn’t attempt to make Cumberbatch look similar. Michael Shannon looks a little better as Westinghouse, he has his signature facial hair and they are also around the same age. The best casting is Nicolas Hoult as Nikola Tesla. They’re around the same age, same height, and very similar in appearance. Even though Tesla isn’t a major character in the film, I appreciate that they took the time to make him accurate.

There are a few standout things in this film, it’s not all bad. It’s a pretty movie, lots of interesting shots and tricks with lighting. I also enjoyed Benedict Cumberbatch’s performance. He didn’t look like Edison, but he did a decent job portraying the genius workaholic. My favorite cast member was Katherine Waterston as George Westinghouse’s wife Marguerite. She’s supportive, outspoken, and strong and even though she has a minor role, she has the best line in the entire film. There is a scene where the Westinghouse’s are waiting to meet with a committee about the World’s Fair. They’re expecting to see Edison to walk in, but Samuel Insull (Edison’s secretary portrayed by Tom Holland) appears instead. Marguerite looks to her husband and says (not quietly) “He looks 12…” The whole theater laughed and the movie was instantly worth the ticket price. I was unable to find any real information on Marguerite, so I can’t confirm if her portrayal was historically accurate, but she was definitely a positive addition to the film.

The Current War is your standard, run-of-the-mill biopic, nothing special, but certainly watchable and enjoyable. While not perfect, it does not deserve the cloud of negativity surrounding it. I recommend giving it a change, especially if you’re interested in the subject matter.