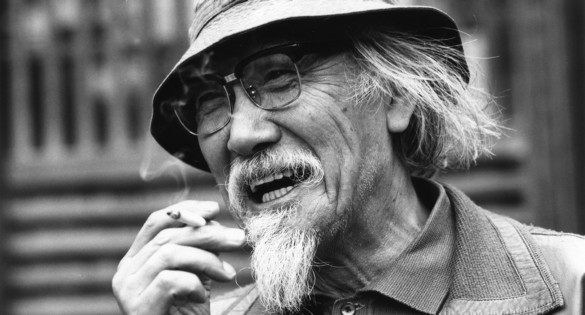 Akira Kurosawa and Yasujirō Ozu are the two names synonymous with Japanese cinema. They are representative of the country’s post-war entertainment with the media, providing the world beautiful scenes of humanity and grace that have become glued with historical pop culture. Even other directors like Kon Ichikawa and Nagisa Oshima have their own place in Japanese cinema that is well recognized. However, the studios blocked a man who dared challenge the entire system with the support of the general public. Seijun Suzuki was like a sore thumb for the industry, but his work spoke to a young generation of moviegoers in the mid-60s the establishment didn’t understand or really appreciate for a long time.

Born in 1923, Suzuki was conscripted into the Japanese military during World War II and survived two separate sinkings caused by American torpedos; he would describe in time there as farcical. After the war, he was invited by a friend to get a job as an assistant at the Shochiku Company and began to work with different film directors. To his acknowledgment, Suzuki said he wasn’t the best assistant because he was half-drunk all the time, but quickly learned tricks of the trade. In 1953, Nikkatsu Studios reestablished itself after being closed throughout the war, hiring assistant directors from other companies, including Suzuki.

With a bigger salary and more time used as an assistant, Suzuki was given the chance to write a script that was produced (Duel at Sunset) and was promoted to be a full-time lead director. His first movie, 1956’s Victory Is Mine, was a B-film with relative success and Nikkatsu would continue to hire Suzuki on a regular basis. In his first years, Suzuki would make 3 films a year on a small budget in very tight schedules; Underworld Beauty (1958), Take Aim At The Police Van (1960), and Detective Bureau 2-3: Go to Hell Bastards (1963) were notable works in the first half of Suzuki’s career. They were all B-movies, but it started to bring in a cult following, leading up to a short period of movies that would make Suzuki an important director for the 1960s.

By the time Suzuka made what was his breakthrough picture, he had made a stunning 30 features. Beast follows a detective who goes undercover in the Yakuza and begins to plan the bosses to fight amongst each other to oust their criminal activities. His main leading actor, Joe Shishido, is a cool cat who embeds himself with the underground world but starts a dangerous game, providing Suzuki to express in a surrealist manner that would follow in his next few features. It is a noir that is not black-and-white, but a rapidly colorful take like Roger Corman’s style of directing.

Nikkatsu cut the budget for this film prior because they were not happy with Suzuki’s growing bizarre style that was not part of the studio. However, Suzuki became even more creative to get the images he initially wanted, bothering the heads when it was released. Tetsuya Watari plays a former hitman who wants to live free from the organized crime he once worked in but is harassed by other gangs who want him to join or else he will be killed. For this style, Suzuki looked at pop music and graphic art of the period to create some memorable shots, things that certainly were seen in homage to other samurai and yakuza-style films later on. Again, not a dark noir, but of hip fixtures of Japan’s youthful culture.

Some consider this Suzuki’s magnum opus. Joe Shishido reunited with Suzuki to play a yakuza assassin who is hired for a dangerous assignment and then is hunted by what is seemingly a phantom killer who plays mind games with its target. Suzuki was hired to rewrite the script, which the studio hated, and the day before shooting he changed the tone of the film from a hard-boiled noir to a more comical, anarchistic, absurdist blend with a style that more Godard and Bunuel than traditional Suzuki films. It was also the first time he shot a film with sex scenes – shocking for the time – as the nudity was explicit and demanding. The film was outlandish and theatres were virtually empty when it opened up and confused about every movie critic in Japan. It was the final straw for his bosses at Nikkatsu.

His relationship with Nikkatsu Studios was rocky from the start of his tenure there. Conflicts with the figureheads over his type of work with studio boss Kyusaku Hori came ahead in 1968 when Hori, who saw Suzuki’s films as bringing a terrible reputation to the studio, fired him after watching Branded To Kill and considered it reprehensible. To Hori, Suzuki had for years made, “movies that make no sense and no money,” and only to a selective clique of filmgoers who backed Suzuki. In return, Suzuki sued Nikkatsu for wrongful termination, bringing out massive support from his fans and other members of the film community which shocked the tightknit establishment. Hori stated the following on Suzuki as a director:

Suzuki makes incomprehensible films. Suzuki does not follow the company’s orders. Suzuki’s films are unprofitable and it costs 60 million yen to make one. Suzuki can no longer make films anywhere. He should quit. Suzuki should open a noodle shop or something instead.

After a lengthy trial with massive support from fans and other directors, in 1971, the studio and Suzuki settled out of court, publically apologized for its defaming remarks against the director, and both Fighting Elegy and Branded to Kill were donated by the studio to what is now the National Film Archive of Japan. Nikkatsu lost more when the company lost so much money that it had to liquidate its most valuable assets and had to rebuild the studio by producing “pink films;” otherwise, softcore porn that was also sex comedies and not so subtle in its content. But for Suzuki, his win came at a cost as all major film production companies in Japan blacklisted him for a decade. During the time, he wrote books and directed TV and commercials while also speaking to different film clubs that would show his films at midnight screenings.

A Legacy Of Cool

His return to directing was a triumph, making the Taishō trilogy outside the studio system and receiving acclaim at international film festivals and even the Japanese Academy Awards. A retrospective of his career brought him more global recognition and respect from current directors including Quentin Tarantino, Jim Jarmusch, and Wong Kar-wai. His recognition brought him a new legion of fans endeared to the style Suzuki chose to follow instead of what was expected.  Until his death in 2017, he spoke proudly of his career and idealism that challenged the status quo and has a legacy that carries on sixty years later.