The Politics And Morality Of High Noon: A Retrospective 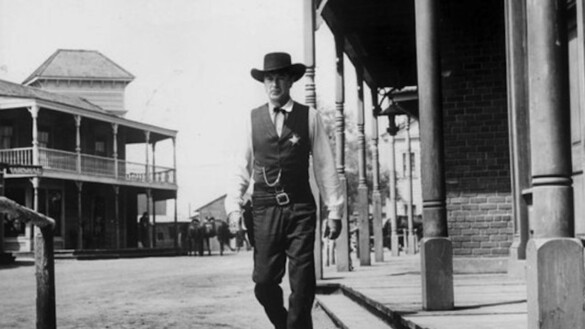 July 24th marks the 70th anniversary of one of Western’s greatest tales, Fred Zinnemann’s High Noon starring Gary Cooper, Grace Kelly, Thomas Mitchell, and Lloyd Bridges. Set in a New Mexico town on one morning, Cooper plays Marshall Will Kane, retiring and recently married to a beautiful Quaker named Amy (Kelly) who is against all forms of violence due to her religious beliefs. Prior to leaving, Marshall Kane is told of a criminal he sent to prison once is coming back into town today on the noon train to seek revenge on Kane. The townspeople are scared and others tell the Marshall to run away before the outlaw arrives. Out of a sense of duty, Kane will stay to challenge him.

It’s about following what is right even when everyone is against you or is too afraid to stand up for their beliefs. Kane cleaned the town of the corruption and lawlessness because it was his job, yet people are resentful of Kane for that. It’s a very enduring theme and changed the way Western stories are told and even grabbed the attention of Dwight Eisenhower, then a candidate for President of the United States, and future Presidents Ronald Reagan and Bill Clinton. Clinton remarked that politicians saw themselves as Cooper’s character because politicians could be, “alone and you feel you’re not getting the support you need,” when they are doing something they know is right.

At the time of its release, some commented on the political allegory of the Red Scare. In fact, in an ironic twist of bipartisanship, the Soviet Union called it the “glorification of the individual,” an insult to its collectivist politics, while many right-wing figures, including Western star John Wayne, condemned the movie as being “the most un-American thing” produced. Odd bedfellows, indeed. How this belief came to be started in the midst of McCarthyism, the political witch-hunt to out anybody with communist sympathies, one of which was its screenwriter, Carl Foreman.

Foreman dabbled in the Communist Party in the 1930s and 40s before becoming disillusioned and leaving the party. In the Second World War, he worked with Frank Capra on scripting training films for the military and propaganda for the public in the Know Your Enemy series. After the war, Foreman forged a partnership deal with producer (and future director) Stanley Kramer and scripted critically acclaimed films including The Clay Pigeon, Champion, The Men, and Cyrano de Bergerac. Foreman was one of Hollywood’s best screenwriters and was adapting the short story “The Tin Star” when he got an unwelcome subpoena.

When Foreman’s previous association with the Communist Party was learned of, the House Un-American Activities Committee brought him to testify. Although he acknowledged his past and that he was no longer part of the party, Foreman still refused to name names and was immediately blacklisted like his fellow writers Dalton Trumbo and Ring Laudner Jr. He was forced to sell his stake in his partnership with Stanley Kramer and moved to England but remained credited for the screenplay. When he co-wrote The Bridge On The River Kwai five years later, he and Michael Wilson, also blacklisted, were not credited and only were given it – plus the Oscar that was won – after the two writers had died in 1984.

John Wayne was offered the role but turned it down because he believed it was an attack on the blacklist which he supported, but his friend and fellow conservative actor Cooper took on the role because he opposed the blacklist. Gary Cooper was out of the country when he won the Best Actor Oscar and it was Wayne who accepted the award on his behalf. Thirty years later, the poster to High Noon was adopted by Poland’s Solidarity movement for the country’s first free elections as the communist regime was falling. As future President Lech Walesa stated about the poster, “Cowboys fight for justice, fight against evil, and fight for freedom, both physical and spiritual.”

Although the film lost Best Picture to The Greatest Show On Earth, it has received the long-lasting legacy it has very much deserved. It was one of the first films selected for the National Film Industry in 1989, considered to be “culturally, historically, or aesthetically significant.” It challenged traditional Western elements for something not as thrilling and fun, but more serious and morally challenging. The hidden politics remain there, once scoffed and derided, now well-liked across political spectrums.