We are trapped. In the year 2020, or when we assume that we would have 20/20 vision on things, we are forced to march through life blindfolded as COVID-19 dismantles and shreds pursuits and to-dos. If you’ve been an outdoors soul, hopefully you’ve been learning to love indoors. If you’ve been pro-indoors, may the walls haven’t wised up and caved in. Any semblance of normalcy is catnip, and that is what this year’s Fantastic Fest is by keeping its lights on — by going all-virtual. Thank the organizers for that sliver of freedom, or the reminder that freedom is around the bend.

That might also be the theme of the seven shorts in Fantastic Shorts, one of this year’s FF’s four shorts blocks. We’ll leave the programmers to answer this, though. Compiled into a two-hour showcase, all the titles impress in the technical department — even for purely comical purposes — and some among them also feature narratives that elevate them further. In this feature-barren and premiere-light rendition of FF, Fantastic Shorts is a genuine blessing. Or simply a new experience that (at last) has your attention. Either way: entrapment, meets freedom. 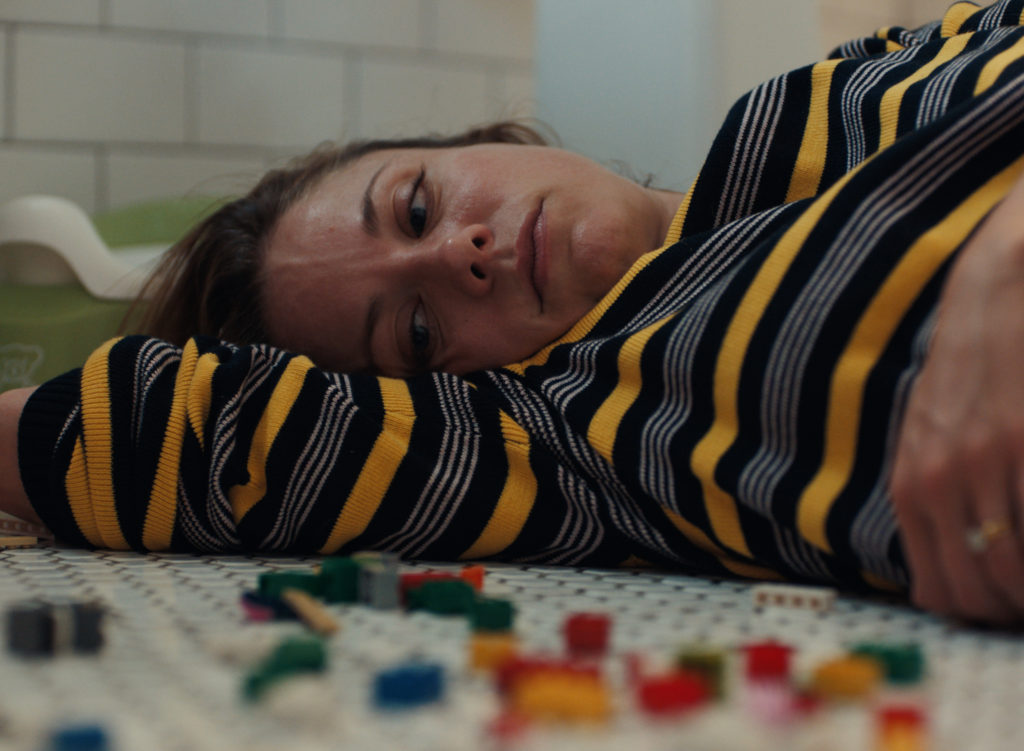 As the opening short, Blocks, directed and written by Bridget Moloney, suggests, our lead Ashleigh (Claire Coffee) has always been the wife to her husband Eric (Mark Webber) and the mother to her kids Wren and Gus (Phoebe Sinclair and George Sinclair). No power plays or burdens here — just responsibilities — but all the same she can’t reserve some hours of the day for herself. One morning, Ashleigh’s body, as if saying “enough is enough,” has her coughing up LEGO blocks, an act that initially evokes the bizarre but ultimately assembles into a considerate message. Composer Ariel Marx aligns her notes with that progress, starting out all Twilight Zone-esque but gradually rounds it out with relatability. Much of the short’s effectiveness also relies on Coffee’s performance; the expressiveness there is the best anchor that Moloney possesses. [B+] 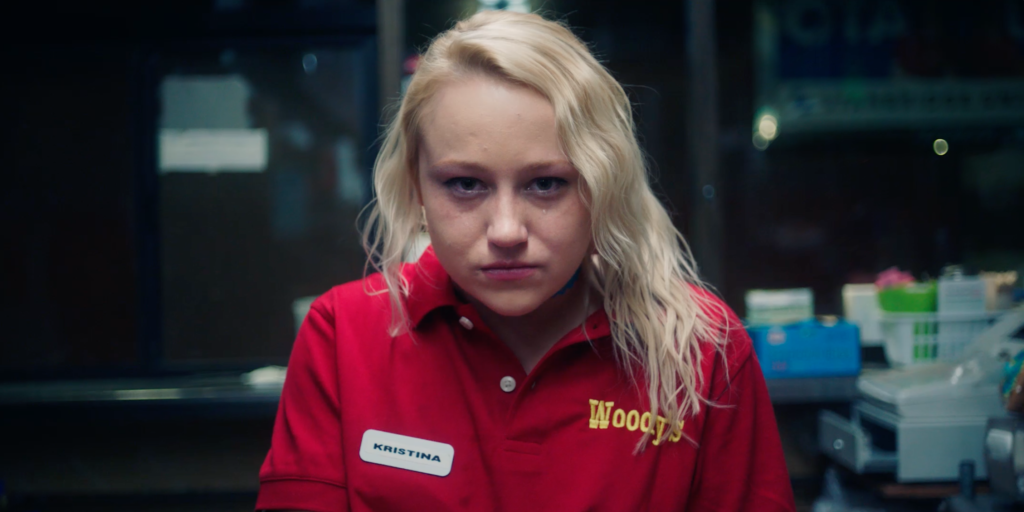 I Love Your Guts, directed and written by David Janove, moves the setting away from the home to a burger joint, but it’s the late-night shift (with a dangerous drunk on the way) and one of our leads is in an unrequited-love situation. Kristina (Allie McCarthy) adores her colleague Jacqui (Danielle Kay) — a lot — and still keeps that adoration to herself. In a way, the fries are fine as is, and it is akin to spraying the double-edged ketchup on top she is to declare her love. McCarthy and Kay boast the charm and cadence that make them cousins of Booksmart’s Kaitlyn Dever and Beanie Feldstein, or at the least regular contacts. Although the editing from Cara Bomar and Jordan Towles slightly falters during the action-heavy climax — it seems to be a beat behind the action — it’s a negligible flaw. A testament to the strength in the serves of our leads and d.p. Aser Santos Jr. (who stretches the confining kitchen with a couple of commendable long takes). [B] 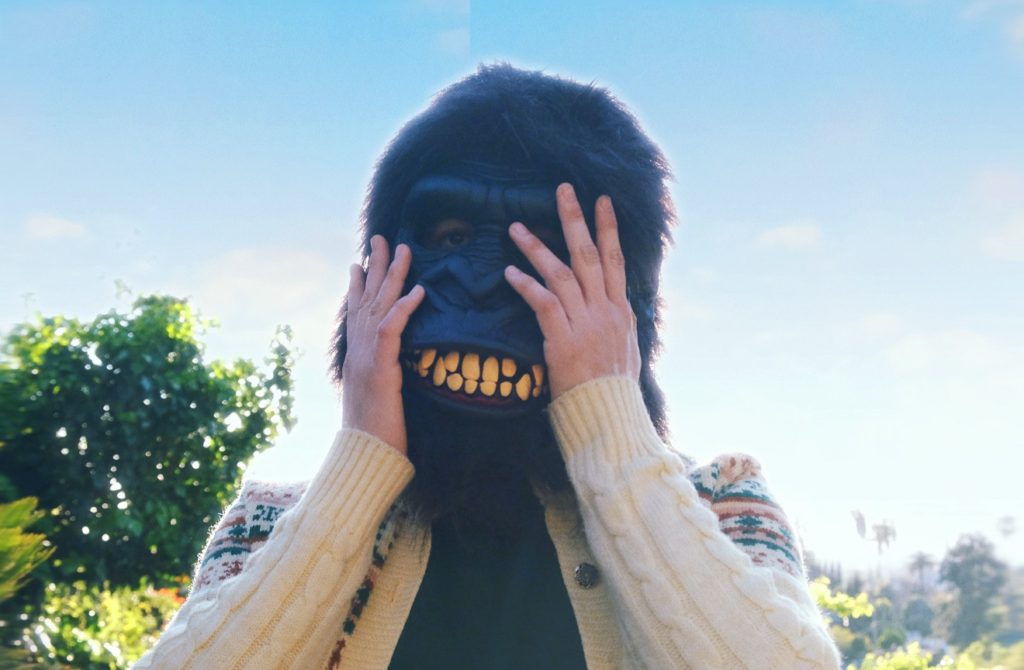 The notion of restriction becomes most extreme in Solution for Sadness (orig. Solució per a la tristeza) as it centers on a gorilla mask that, upon wearing, will hide teary eyes and downward brows and the like — for good. Tuixén (Tuixén Benet, who also directed and co-wrote the short with Marc Martínez Jordán) learns about it first-hand after admitting to the universe — through narration to viewers — that she’d get the gold “if crying was an Olympic sport,” and her search for the mask’s origins will have her face a secret society plus an inconvenient truth (that 2020 has been showing us every month since March). It’s tough to assess the acting since key players all wear masks, but Benet has translated her performance into other components of the short, chiefly its deceptively comedic plot. Even with the reliance on exposition and technicals befitting a made-over-the-weekend production, this short is no student film. It only behaves like one, and it actually has something to say — or a gift to give — at the close. A surprisingly introspective trip, this one, as a journey out of a dark place tends to be. [B]

As if an amalgam of past shorts, thematically, Jack and Jo Don’t Want to Die has Jack (Justin Kirk, effectively deadpan) looking to commit suicide on his last shift; just one bullet will launch both the pain of the routine and an unreturned love out of his system. Jo (Olivia Edward) also has life issues of her own, which are revealed to us when Jack gets her out of a suspension chamber. Yes, you read that right —  this short, directed and written by Kantu Lentz, is of the low-key sci-fi type and stylistically the most cinematic. But it’s not just all polish here, which allows its “Coens meets Niccol” aesthetics to shine, as Jack and Jo also has a beating heart. Look to its title, then watch the entire thing. Reconnecting with the world won’t be easy, but at the same time it isn’t as difficult as one would think— especially when you hold on long enough for a common spark, however minor, to come along. [B+] 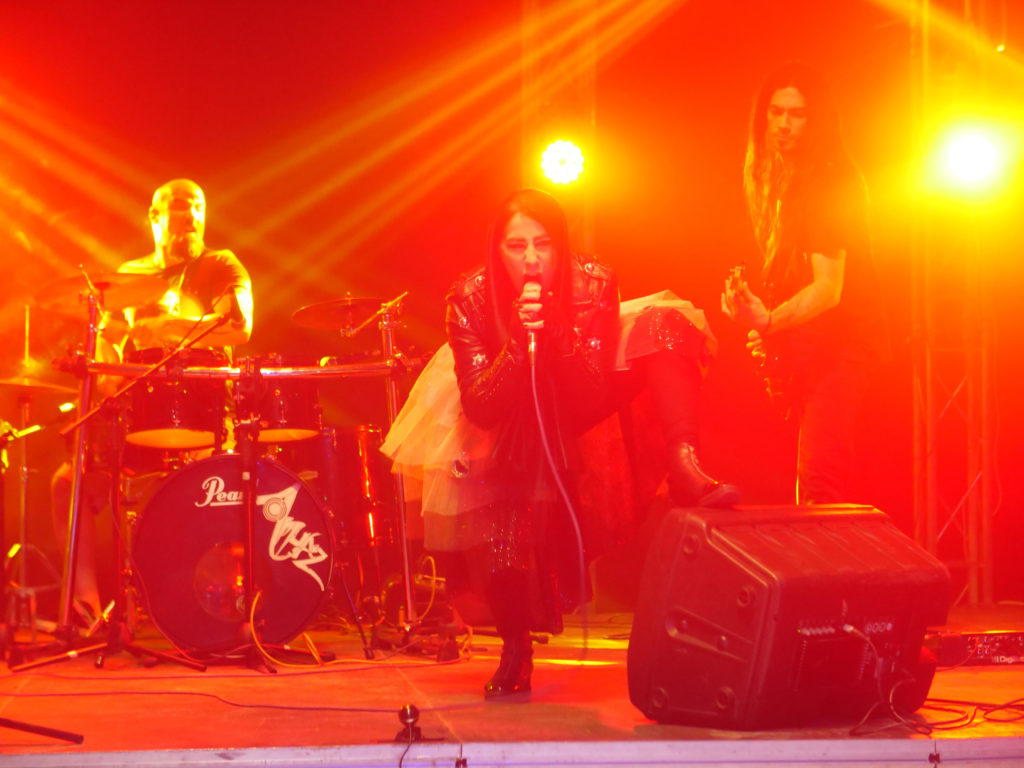 Still, for some cultures, the wait will be longer — if not more of a dream. “They are hunting. Fix your scarf,” whispered a woman to our lead Shima (Mohadeseh Kharaman), starting off director-writer Farbod Ardebili’s Forbidden to See Us Scream in Tehran with palpable tension. “They” is a reference to the morality police, which to be specific are old men in plainclothes. As long as Shima is “law-abiding,” she doesn’t have to tell the world that she is — are you sitting down? — the frontwoman of a death metal band. Ardebili’s short walks on a beautiful foundation, a spin on the need to express oneself in a culture where expression is limited. That is why whenever Shima raises her voice, either to protect her deaf-mute sister Sherin (Sarina Amiri) or to put to bed a wild plan to go viral (and have a future) by drummer Farzad (Babak Kamangir), Kharaman’s performance will stir your soul. Despite the suspenseful beginning, the short doesn’t aim to be harrowing. Instead, it’s full of hope, but it understands that at times hope can be in the background or reserved for one character. A short film with layers. Sorry, let’s do this right: A SHORT FILM WITH LAYERS! WOW! [A] 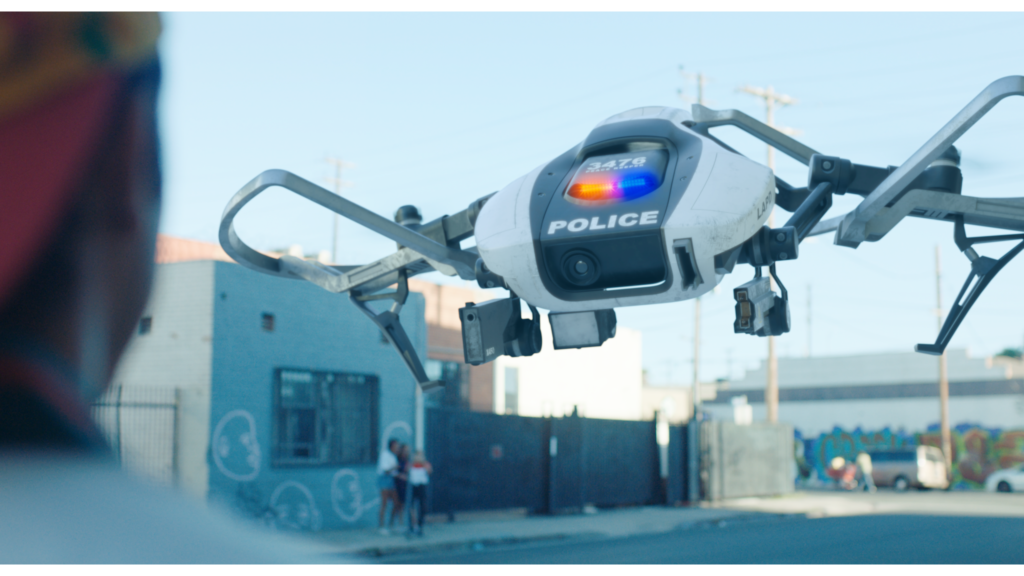 Not one to dial back the distress, though, is Please Hold from K.D. Dávila. The U.S. in this production is a dystopia realized as all you have to do for a police drone to swoop down and arrest you is to walk to work while munching on a banana. This is what happened to young Mateo Tores (Erick Lopez). As to what his charges are? Who knows — there’s no one in the prison to listen to your queries except for the constant muzak and a most-irksome virtual public defender. In visualizing the story Dávila co-wrote with Levin Meneske, Dávila makes a short that is as darkly funny as it is scarily feasible, rightfully critical and, above all that, full of compassion. Lopez stops short of completing his character’s emotional shifts in the short’s final minutes — or that Dávila misses the chance to insert some potentially lasting close-ups — but the careful cinematography and audio do more than enough to compensate. And much like Forbidden…, the short looks at “freedom” through lens tinted in shades of gray, which is both more realistic and in line with the narrative (of a system with the heartlessness so normalized it now has no shame being a governmental moneymaker). [A-] 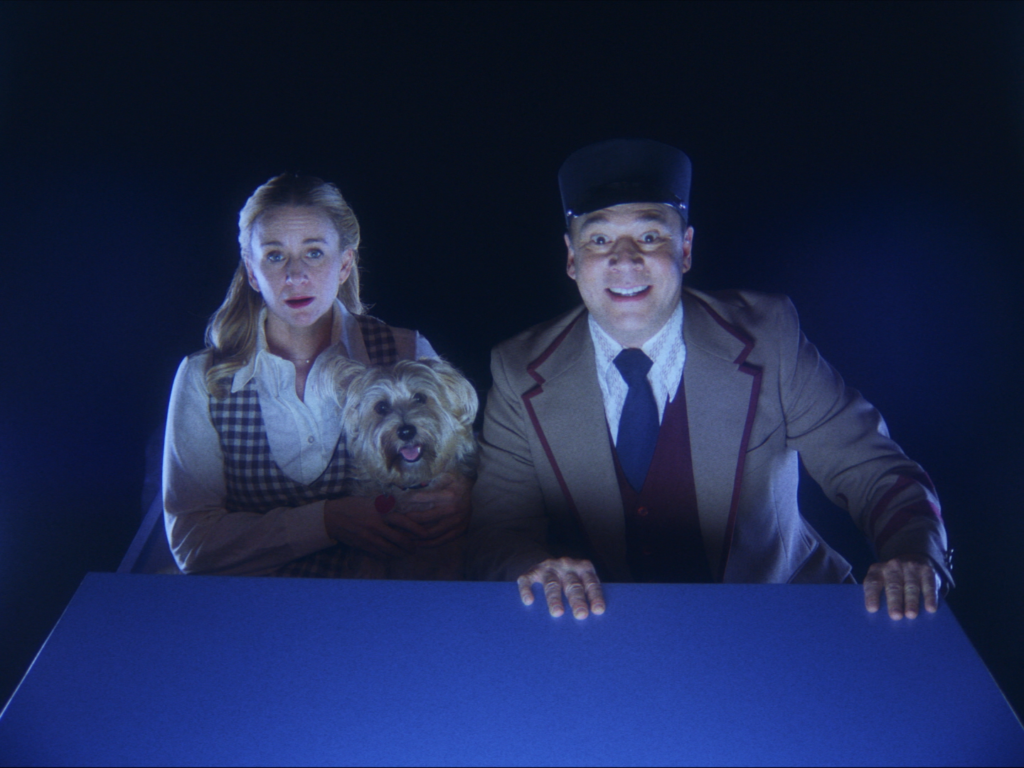 Not only does (You’ll Make It In) Florida, directed, written, edited and scored by Phil Chernyak, give the shorts program’s possible motif of “freedom is possible” the most vivid treatment, it also replaces Florida’s reputation as the producer of weird news to a desirable change of scenery. While browsing through a magazine, exhausted teacher Pam (Emily Cass McDonnell, channeling SNL’s Debbie Downer) comes across an ad highlighting how much sunshine the Sunshine State has, which promptly comes alive as a retro ride with a cheery Guide (Danny Burstein, relishing in hamming things up). With neon fonts, projected backgrounds, foggy lighting, miniatures and more, this short is first and foremost a technical showcase — and a smooth swing from life drama to motivational musical! — despite having a meaningful plot. This is the weakest title out of the seven in Fantastic Shorts, but a downright perfect closer: It allows most of us to temporarily escape our homes and reminds us that the Grand Gift called traveling is waiting for us after all this madness. [B-]