Movie Review: ‘The Boys in the Band” Still Rings True in 2020 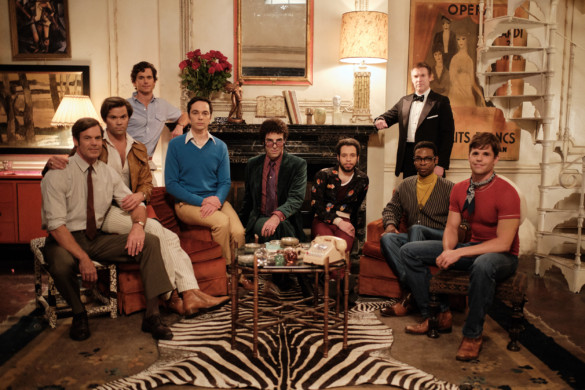 Synopsis: A group of gay friends reunites to celebrate one of their birthdays at an apartment on the Upper East Side of Manhattan. When the host’s potentially closeted college roommate shows up uninvited, the evening is thrown into turmoil.

A group of men gathers together in a New York apartment to celebrate the birthday of a friend. Mayhem ensues. Over the course of the party, these friends will relive past love, regret, and come to terms with their inner demons. The Boys in the Band, directed by Joe Mantello, is now available on Netflix. It is the film version of the revival of the play by the same name, written by Mart Crowley. The revival took place on Broadway on the 50th anniversary of its original premiere in 2018. The cast of the 2018 production is reviving the roles for this film: Jim Parsons, Zachary Quinto, Andrew Rannells, and Brian Hutchison.

The setting is announced in the immediate opening of the film: New York City, 1968. The opening credits immediately establish the style and personality of each character by giving quick clips of each character at work, walking around the city, and living life. We are introduced to Michael (Parsons), and learn that he is getting ready to host a birthday party for his friend Harold (Quinto). But this party won’t go quite as planned. Michael’s guests are all gay, and his party preparations are disrupted by his college roommate, Harold, who calls to let Michael know he is in New York City, and desperate to talk to him. We see Michael panic because unlike the party guests he is expecting, Harold is straight, with a wife and two daughters in Washington DC. Harold will continue to disrupt the evening, bringing with him a sense of doom every time he appears onscreen. The party begins with laughter and dancing and ends with most characters ending up with a better look at who they are once their deeply rooted fear, anger, and bitterness are exposed.

I admit I went into this film with a total bias. I have seen the original William Friedkin film from 1970. I own a copy of the original play and have read it several times. This play was very important when it came out because it reflects where gay culture was in 1968. It showed mainstream audiences a look at the life of men who lived their lives very much in secret. It showed the stereotypical flamboyant gay man with the character of Emory (played in this version by Robin de Jesus). It portrays a couple, one of whom is still technically married with two children. These men appear to understand who they are, and how they want to live their lives. In 2020, is it still relevant? Gays are allowed to get married now, able to serve in the military and adopt children. This updated version has come out the same year the Supreme Court decided that gays can no longer lose their jobs based on their sexuality. Even as I write this, there is an open position on the SCOTUS that might go to an extremely conservative judge. Despite gains made by the LGBT community, we still live in a country where people often have to hide who they are in order to live in peace.

This movie completely lived up to my high expectations. It was stylish, with great costumes, catchy music, and phenomenal acting. The supporting cast is excellent, from Andrew Rannells and Tuk Watkins playing a couple that is so relatable to so many of us, to Quinto, who shines as a self-conscious and embittered man, who is so terrified of his appearance he always shows up late to any occasion. Brian Hutchison is excellent as the tormented, possibly in-the-closet Alan. You see his internal conflicts playing across his face throughout the entire film. It is Parsons, as Michael, however, who is the true standout. He is another character who is uncomfortable in his own skin, with bitter memories and unsure of his place in the world. His seething anger towards Alan is clear from the moment they first speak on the phone. Alan is different from his other friends. You see the anguish on Michael’s face when Alan calls him at the start of the film, and that clearly, there is a history between these two men. When Michael does finally explode, it is well expected. We, the audience, have been watching the pressure build throughout the course of the film.

Please watch The Boys in the Band on Netflix. Although it takes place in 1968 and might appear dated at times (some of the verbal expressions, the fashion, etc) it still is truly relevant today. Not simply because of the theme of homosexuality, but a reminder to us all of what life is like when you are really never comfortable in your place in the world, let alone in your own skin.