Movie Review (LFF): ‘The Painter and The Thief’ is an Extraordinary Exploration of Obsession and Friendship 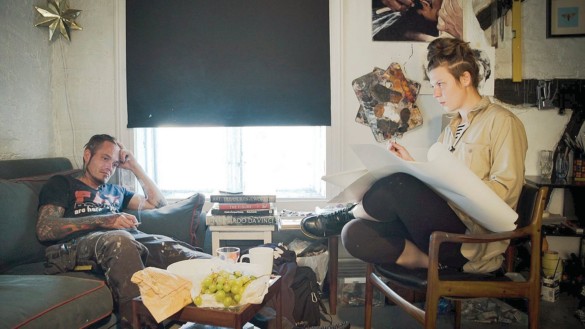 Synopsis: Czech artist Barbora Kysilkova develops an unlikely friendship with the man who stole two of her paintings.

For a documentary feature to capture the imagination of audiences, it requires a story so bizarre that it’s hard to comprehend that it really did happen. This is exactly the best way to describe Benjamin Ree’s The Painter and The Thief, a brilliant and beautiful film that explores themes of obsession, change, and forgiveness while somehow covering every major perspective of those involved.

The documentary centers around two very different but complex personalities, one in the form of Czech artist Barbora Kysilkova and the other Norwegian criminal Karl Bertil-Nordland. After relocating to Norway, Kysilkova has some of her most valuable paintings stolen, with CCTV footage capturing the events. In an unlikely turn of events, she’s able to contact one of the thieves – Nordland – and from here a fascinating and unlikely friendship forms. The two begin to regularly meet up and Kysilkova even makes several incredible paintings of Nordland, as her fascination with him becomes a borderline obsession.

It’s jam-packed with twists and turns, so much so you’d be forgiven for thinking this wasn’t a documentary at all. It’s extremely engaging and unpredictable, with the events surrounding the two at the center of this story seems too unbelievable to be true. But that’s the beauty of the documentary – it is a true story, it is real, and the way director Benjamin Ree captures every heartfelt moment is extraordinary.

When thinking of the year’s best endings, The Painter and The Thief will be near the top of every list. It’s one final, beautiful twist that turns the documentary on its head and allows you to view particular characters – particularly Kysilkova – in a different light, especially her relationship with Nordland.

By far, the film’s strongest aspect is the fascinating characters, not just Nordland and Kysilkova, but the others involved in their life too. Early on in the documentary, we see the relationship between Nordland and his then-girlfriend, which culminates in a tragic, unexpected twist that changes his life forever. But this event is integral to furthering the relationship between Kysilkova and Nordland, especially in how the former ensures to be the most supportive person in his life.

The other fascinating relationship shown on screen is between Kysilkova and her partner Øystein, who finds himself frustrated and concerned about the growing bond between his partner and the man who turned her life upside down. Øystein knows his partner and her extremely tough past better than anybody and knows of the dangers when she becomes too close to the wrong people. Even though we as the viewer can see that Nordland is becoming a changed man, to Øystein he’s a criminal that his partner has become obsessed about, so it’s understandable and easy to sympathize with his feelings throughout.

While the film moves relatively seamlessly between characters, there are a couple of early clunky moments when particular moments are relived through both perspectives. The documentary works at its strongest when we see the moments between the two characters happen almost simultaneously, rather than exploring one POV at a time. This only happens early on – perhaps to help establish the characters and their background – so it’s not a big enough flaw to detract from the overall high quality of the documentary.

Norwegian filmmaker Benjamin Ree is emerging as one of the best International documentary creators around. He previously made the 2016 documentary Magnus, exploring the life of chess champion (and fantasy football cult hero) Magnus Carlsen, which played at a handful of film festivals around the world. With The Painter and The Thief, Ree’s reputation within the industry is sure to rocket sky-high. With Neon at the helm (who last year were behind Parasite’s Oscar success), there’s no denying its awards chances, especially in the documentary and International film categories. It would be a surprise not to see Ree at next year’s Academy Awards in some form, and this will surely be a critical darling in those aforementioned categories.

Praise must also be given to the score from Uno Helmersson which is terrific throughout without ever overbearing the dialogue and story on screen, while Robert Stengård’s editing is essential in creating such a seamless piece that allows the twists and turns to occur naturally and without force.

It’s already had previous success this year in January when picking up the prize for World Cinema Documentary Special Jury Award for Creative Storytelling at Sundance, and it will be no surprise if it also wins similar acclaim at this year’s London Film Festival.

Overall, The Painter and The Thief is a masterful exploration of obsession, the ability to forgive, and the journey it takes for somebody to turn their life around. It’s a satisfying story full of twists and features one of the most memorable closing shots of the last few years. Expect this to be a title that is mentioned frequently throughout awards season, and is surely a must-watch for anybody who is fascinated by extraordinary true stories.