Review: ‘Tom Medina’ Is the Enigmatic Portray Of a Wild Drifter 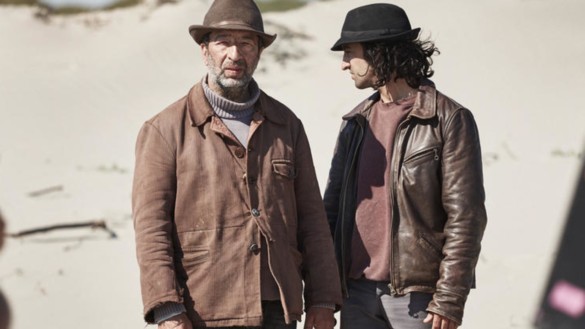 Synopsis: In the mystical French region of Camargue, Tom Medina turns up, on probation, on the doorstep of big-hearted Ulysses. Tom dreams of becoming a good person. But he’s thwarted by the hostility flung in his general direction, which shows no sign of abating.

Tom Medina, the main character of Tony Gatlif’s new film, is a puzzle. He is an eccentric man with a lot of energy and imagination. He’s having trouble finding his place in an unforgiving world and is treated by everyone as a loser; it’s hard to argue with them as he rolls over mud and says that his greatest dream is torturing bulls in an arena. But, is that it? What hides behind the jokes, hollow goals, and the unpredictable attitude of this drifter? Who is really Tom Medina?

The film is set in the Camargue, a marshy region in the South of France notable for its variety of fauna. Tom Medina (David Murgia) has been sent here by a juvenile tribunal to work under Ulysse (Slimane Dazi), a man with a heart of gold who tries to rehabilitate problematic men in his ranch. Tom struggles to settle though; besides his stubborn attitude, a traumatic past blocks his progress, and visions of shiny bulls haunt his dreams. He’s soon drawn toward Suzanne (Suzanne Aubert), a young activist that lives in the street and longs to reunite with her child. She sparks a new sense of life and purpose in Tom, who tries to fight against the stamp society has put on him.

The concept of a man finding in nature the motivation to rehabilitate his condition has shades of Laure de Clermont-Tonnerre’s The Mustang. However, Tom Medina doesn’t use horses, but the tranquility and vastness of the Camargue instead. It’s a place brimming with life; in its fauna, Tom finds symbols of strength that, if he manages to overcome, might help him find his purpose.

Tom is like a bull: difficult to tame and at the mercy of human aggression and squared mentality. If there’s a crime in the zone, he’s the first one to be blamed due to his reputation. This has created a cycle of humiliation that Tom is tired of. How can he dream and pursue his goals under such circumstances? He has learned not to trust anyone, not even kind Ulysse who gives him speeches and constantly motivates him. Suzanne seems to be the only figure able to inspire him.

Tony Gatlif’s cinema has often tried to explore his own history and background as an Algerian Gypsy and Tom Medina is not the exception to the norm. It’s inspired by the educator who helped him after fleeing Algeria, as well as his own testimonies of migration. And just like in his previous work, music plays an important role.

Throughout Tom Medina, we listen to powerful songs that represent Tom’s wild soul. Gatlif wrote the lyrics and then recorded the music with Gipsy Kings’ singer Nicolás Reyes. This talent combo resulted in a collection of catchy, energetic, and untamed songs that use both flamenco and electric guitar, as well as wind instruments, pipes, and sax. Singer Karoline Rose – who plays Ulysse’s daughter, Stella –  was also involved in the creative process; her singing scenes are not only memorable and electric, but they also provide moments of connection with Tom, whose wild nature lights up at the sound of these tunes. It’s a shame that Stella’s character gets lost in the story.

The shooting of the film was interrupted by lockdown which triggered script alterations. This is probably why the story is so unfocused. We are introduced to ambiguous characters, ideas, and concepts whose development would have enriched the plot, but are left meandering in a sea of emotions. The explanation of Tom’s backstory, inspired by Katlif’s experience watching the arrival of a group of migrants arriving at a beach in Greece, lacks understanding and doesn’t mesh organically with the story. The mystic elements don’t add much either and are quickly forgotten, only to return in the form of a forced dialogue about telluric energy.

Despite its missteps, Tom Medina succeeds in captivating through a story of a man fighting against destiny brought to life by a vibrant David Murgia and the support of Patrick Ghiringhelli’s gorgeous cinematography.

Tom Medina was screened as part of the Cinema de la Plage program at Cannes 2021.