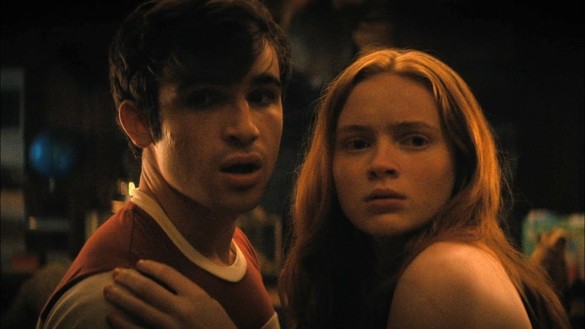 Synopsis: Shadyside, 1978. School’s out for summer and the activities at Camp Nightwing are about to begin. But when another Shadysider is possessed with the urge to kill, the fun in the sun becomes a gruesome fight for survival.

Fear Street Part I: 1994 was a slick and super fun breath of fresh air in the horror slasher genre that successfully represented the spirit of R.L. Stine’s classic thriller series while at the same time gave us more gore, more thrills, and sharper characters than many of us could have expected. I had a few qualms with the first installment in Netflix’s new Fear Street trilogy—I couldn’t deny the occasional lull in the middle hour—but overall it worked beautifully, with a particularly memorable LGBTQ relationship that marked the heart of the story.

Now a week later we get the second installment—Fear Street Part Two: 1978—and I am sorry to say the quality has dipped a bit in this occasionally fun but mostly empty exercise in terror. The new story set sixteen years prior to the events of the first movie has a similarly polished style, solid actors, some neat kills, a terrific soundtrack—but too much of the storytelling is muddled and inconsequential, and, unlike the first movie, it’s hard to care about the outcomes of the characters.

The opening is one of the best parts of Fear Street Part Two: 1978—because we actually start with the characters from the previous movie. I admired that instead of just throwing us into an alternate story, director and co-writer Leigh Janiak gives us a few more moments with the core characters we loved from the first installment (including Deena and her brother Josh), providing a clear and necessary continuity. But when another Shadyside resident reveals she survived a massacre many years ago involving another possessed murderer, the real story begins, a near two-hour-long flashback in a sense that’s meant to provide additional context as to what took control of the villains in the first movie.

At first, the new location of Camp Nightwing is a welcome one, the first few scenes offering the look and feel of so many iconic horror films of the period like Friday the 13th and The Burning, not to mention the more recent limited series American Horror Story: 1984. Very quickly we’re introduced to dozens of characters, including Ziggy (Sadie Sink of Stranger Things), an easy target of the other campers, and Ziggy’s sister Cindy (Emily Rudd), who has no idea her boyfriend Tommy (McCabe Slye) might soon be turning to the dark side.

The best part of this second installment by far is the lead character of Ziggy. She has an ease and confidence that make her compelling to watch even in a story of little consequence, especially when she goes after what she wants, like the cute camp counselor Nick (Ted Sutherland) who’s not supposed to kiss the younger campers. He’s a Stephen King fanatic who claims his second-favorite of his books is ‘Salem’s Lot and his favorite of all is Carrie (a weird observation from the character since in 1978 King had only released four books). They have a compelling romantic chemistry that unfortunately isn’t given much screen-time to be developed, with so many other characters and killings to get to.

If you can get past the first forty-five minutes, the suspense (and the slashings) delivers the goods of what you might be searching for in a movie like this, but since the characters aren’t as well-defined this time, given that the ensemble is so much larger, the storyline mostly rushes and goes through the motions and doesn’t offer any major surprises aside from the occasional glorious beheading. There’s a lot of running and screaming through the woods, typical POV shots from the killer, explicit sex scenes, axes to the head, overblown music from Marco Beltrami—all of which could have been a blast in a better movie but here feels tired, especially in a film with characters this slight and an overlong run-time.

What doesn’t help is the odd lack of urgency to the storytelling because everything happening in Fear Street Part Two: 1978 is a mere flashback to the events in Fear Street Part 1: 1994, which was a turn-off for me from the beginning. Even though the first installment is a period film, too (one that more authentically captures its specific year), there’s an immediacy and propulsive nature to the narrative that always makes it feel like it’s happening right now. Even in the scenes with the most tension in Fear Street Part Two: 1978’s second half, the overall structure always put me at arm’s length, like I was watching someone tell me a story rather than watching the story itself.

Fear Street Part Two: 1978 isn’t a complete misfire by any means, and if you enjoyed the first part of the trilogy, odds are you’ll find things to like in this one, too. Janiak offers some terrific visuals toward the end—a killer in an empty field wearing a creepy human mask is a sight I won’t soon forget—and the Final Girl trope from so many horror films is given a unique twist that keeps you momentarily guessing. But by the conclusion, we’ve returned to the beloved characters from the first movie, and all I could think as the credits began to roll on this one was that I wish Fear Street Part Two: 1978 had been a direct sequel that gave us more of 1994 and less of 1978.

Having said all this, I’m not giving up on the trilogy yet. Even though middle chapters tend to be the best in so many trilogies (The Godfather Part II, The Empire Strikes Back, Before Sunset), there is your occasional The Lost World: Jurassic Park. Will Fear Street Part Three: 1666 give this near-six-hour story a proper send-off? With the creative and unexpected surprise seen right before the credits, signs definitely point to yes.