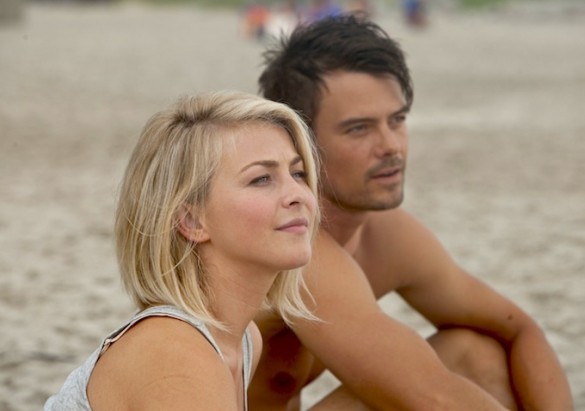 Synopsis: A young woman with a mysterious past lands in Southport, North Carolina where her bond with a widower forces her to confront the dark secret that haunts her.

DIRECTION
Lasse Hallström does a great job with this movie. Hallström has really done well with some of his latest projects including Salmon Fishing in the Yemen and Dear John, and this one also fits the bill. The opening sequence to this movie really sets the tone when Hough’s character is running frantic and scared and right away you know there’s a secret. The drama he builds is great and very different for a movie based on a Nicholas Sparks novel. Hallström gets great performances out of this actors and I think his musical choices were spot on for this movie. Some of the climatic sequences and the ending sequence could of been executed better which brought this movie down for me a little bit. I don’t think the big climatic drama between Hough and Duhamel hit hard enough and it didn’t provoke that emotion that most Sparks based movies do, at least not with the main love story in the film. There were some underdeveloped archs in the movie too which also brought it down for me. Overall though, Hallström did a great job and makes it worth going to see.

SCRIPT
Anything that Nicholas Sparks writes is going to be good and its hard to argue that. This movie is a little bit different for Sparks, who also produced this film. It’s darker in tone and has more action drama than most films based off of Sparks’ novels. I think it’s a great script and has some surprises in it that are a nice touch. The biggest problems I have with this script is that I don’t think the main antagonist was written well and the ending twist came off a little weird. The antagonist, played by David Lyons, didn’t draw me in through most of the movie. The script does a great job of drawing in the character towards the end, but the middle of the film could have been executed better. The ending twist, which I thought was great in theory, needed a different set up than what it got. I didn’t read the book, but based off of what I saw, I think this fits perfectly in a book. The idea of this twist makes absolute perfect sense in real life and how people think and treat certain situation. In the movie however, there are elements that are needed since its a film, but it didn’t translate well to the big screen. The love story doesn’t live up other Sparks’ novels either. Nobody can touch Noah and Allie to me and I also prefer Jamie and Landon over Alex and Katie in this film. If you don’t know who I’m talking about, shame on you, and go look them up. Great movies.

PERFORMANCES
I loved Josh Duhamel in this movie. He is an incredible actor, in my opinion, and pulls off a strong performance. My only downgrade to Duhamel in this film was that the climatic scene in the 3rd act with Julianne Hough’s charachter didn’t provoke anything in me, but that’s also on Hough as well. I thought Hough was pretty good considering she hasn’t done much before. Her performance lacked in the emotional scenes and you could tell she had a hard time pulling that out. My favorite part is easily the awesome surprise performances by Noah Lomax and Mimi Kirkland as Duhamel’s kids in this movie. They were fantastic and brought a strong performance to the film and added lots of value. Kirkland is adorable and I loved her in the movie. Grade A from her!

SCORE
The score wasn’t a huge element to the movie, but from what was there, it was great. The score and musical elements really drew me in and made a great impact on the movie. It’s a soundtrack I look forward to listening to later.

P.S. My girlfriend, Brandi, thought this was an A+. Most girls will probably like it.