Movie Review: Now You See Me amazes with fun and deception 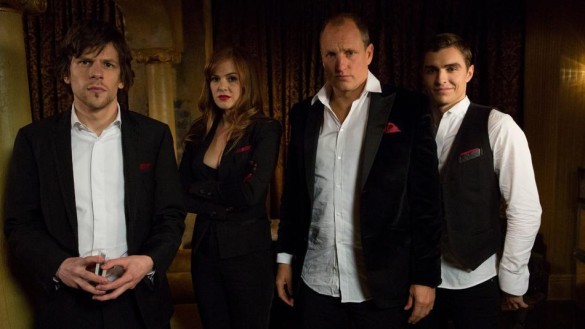 Synopsis: An FBI agent and an Interpol detective track a team of illusionists who pull off bank heists during their performances and reward their audiences with the money.

I haven’t really enjoyed a ton of Louis Leterrier’s work outside of The Incredible Hulk but he gets it right with Now You See Me. He has a really strong script which really helps him out a lot but he puts the pieces of the puzzle together really well. The swooping camera movements showcases really well where all the magic is happening (literally and figuratively). You really get swept up into the environment and the aesthetic of magic where it has a National Treasure vibe to it but it’s masked in modern, David Copperfield-esk entertainment. The action shots are a lot of fun and executed well for the most part which I enjoyed. Some of the scenes came off a little bit cheesy, especially with Woody Harrelson’s character, but when you’re in the environment of magic, you can expect that a little bit. The visuals along with that are great and again add to the Las Vegas-showcase aesthetic, especially within the magic performance scenes. Leterrier’s biggest win however, is keeping you on the fence of who you are rooting for. Every character at some point makes you want to root for them and at times you start to question them a little bit which is done amazing well and Leterrier let’s you make up decisions where you could pick from several scenarios before they really reveal what’s going on. In order to do that, things have to be well shot and the performances have to be spot on, which they are, so much kudos to Leterrier and his team.

The script for this movie is amazing and is the best foundation any movie could ask for. The screenplay was written by Ed Solomon and Boaz Yakin which I thought was interesting as I haven’t been a huge fan of most of their works. However, Yakin is famously known for directing Remember the Titans, which happens to be one of the best sports movies of all time. With their combined efforts, along with a few others as well, they came up with something really good here. The story centers around Jessie Eisenberg, Woody Harrelson, Isla Fisher, and David Franco’s characters (The Four Horseman) being called into something more than they could of imagined, a secret society if you will. That elements puts them into a position of doing some amazing things which sets the story into motion at high speeds. The characters start to come together really well for the most part which is a lot of fun to see and it keeps you guessing just as the FBI is as it’s unfolding right in front of you. There are a few storylines that were introduced but never really explored or finished which didn’t make much sense but it at least gave you a sense of who you are watching. The characters are funny, charming and well written which added a lot to the movie for me personally. The ending is the best part though as it unfolds in a clever, fun way that I honestly didn’t see coming. It’s a little bit ambiguous and not 100% clear on everything but I’m okay with that because the core soul of the film is deception and misdirection. That being said, when you put all the pieces together, it’s actually a very simple story that brings you in closer to make you believe you’re seeing more than what you actually are. (See what I did there?)

The performances for this film are amazing, which is what is needed for the specific script that this film has. Harrelson is on in A-game big time as this funny, witty mentalist who loves playing with people’s minds, sometimes just at the expense of making people laugh or making a situation awkward. Eisenberg has some of that gravitas you saw in The Social Network which was fun to see again, although his character could of been played with a little bit more. Fisher and Franco also do a great job in this film, while they are in the background for the most part, they are important to the team and do have their moments in the sun. Michael Caine also has a background role but when he’s in the film, he’s Michael Caine and you can’t help but love him. This movie though is really about Mark Ruffalo and Morgan Freeman’s characters though. They are mostly different storylines that intersect at certain moments, but when they do intersect, it’s critical to the story and the performances bring all of that importance to life. You start to see what their motivations are and the layers start to peel back slowly as the events unfold, which leaves room for some…vulnerability let’s say. Overall what I’m trying to say is, the performances are great.

SCORE
Brian Tyler gets the nod to score here and given his more modern, electronic tones he does well, he was a very fitting choice. As I mentioned in my video review, it’s not my favorite score but I think I like it more than what I originally thought. The main themes are good and are a fun listen to outside the movie but it doesn’t add a ton of suspense which I thought the movie was trying to go for in some elements. I think he does an alright job but it’s not his best work.