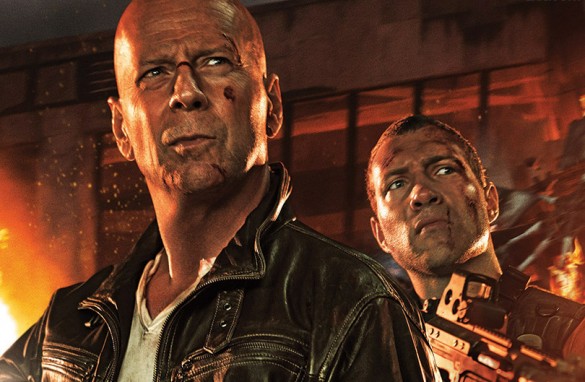 Synopsis: John McClane travels to Russia to help out his seemingly wayward son, Jack, only to discover that Jack is a CIA operative working to prevent a nuclear-weapons heist, causing the father and son to team up against underworld forces.

DIRECTION
John Moore has done some really great work, such as Behind Enemy Lines, but he’s also done some terrible work, such as Max Payne. We’re going to put A Good Day to Die Hard in the awful category for Moore. This movie is really bad and probably the worst of the series. I won’t blame it all on Moore as I think the script screwed this project from the beginning, but he didn’t help a lot. The action in this movie is boring and senseless. There are scenes in this movie that are way over the top and don’t make any sense at all. In the first ten minutes of the movie, you basically hear Moore shouting from the set, “Let’s throw any sense of realism and credibility out the window.” I realize that the Die Hard series doesn’t set itself on realism, but this is bad even for that. I did like how Moore set up some of the relational pieces between McClane and his son. That part of it was good, but this is easily one of Moores’ worsts films. The movie takes itself way too seriously when the one-liners and premise are awful. Moore even stole sequences from the first film which was a little offensive as a fan and put this in the worst of category. That being said, the relational pieces of this bumped up the grade slightly.

SCRIPT
Every thing that Skip Woods writes turns to garbage and this is no exception. I tried to stay hopeful, but knowing that Woods was on this project let me wondering and boy did he not disappoint. The basic premise of the script was good, but Woods took it and jacked it all up in ways that you’ll see when you go see it. This script has the worst one-liners and dialogue of any action movie, let alone the Die Hard franchise. The third act of this movie and where it takes place is awful on a level I can’t begin to describe. Like I said in the direction, Woods threw out all plausible realism or credibility early and then in the third act just went crazy with it. There were people in my theater laughing and actually mocking it out loud during the movie. I think Woods tried to make it a little funny, but he failed miserably and added one liners that didn’t make any sense or were terribly cheesy. Little spoiler here, but Woods even ruined the Yippee ki-yay line! The characters, outside of McClane, were also poorly written. There, of course, is little character development, and the main antagonists of the film were poorly designed. The script’s tone and direction was degrading toward the franchise and makes me feel bad for Willis, who did his best to try to save this movie. Easily the worst script of the franchise.

PERFORMANCES
Thank God for Willis in this movie. He does a great job and brings back an awesome McClane. Willis took normal lines that in essence were not funny or entertaining, but made them fun to watch. While the script and direction took this movie 50 steps backwards in the franchise, Willis and Courtney were great. I thought they had some fun interaction with each other. The more intimate moments between Willis and Courtney were not handled great though. I enjoyed the performances from them, so it makes me wonder if it was directed to be that way. Since Courtney hasn’t been in much before, it was fun to see him come out in this movie. I thought he did a great job and I think this will definitely get him more roles in the future. The “bad guys” in this move were not great though, but I think they were poorly written to begin with.

SCORE
Marco Beltrami’s score wasn’t great but it was good. The beginning track and the ending track’s were fun to listen to. Here’s the kicker; the score didn’t fit this movie at all. While the music itself was good, it was way too serious for this movie and brought on a tone that didn’t fit in any way. The decision for that is not on Beltrami, but on Moore, once again another reason why this movie is the worst of the franchise.