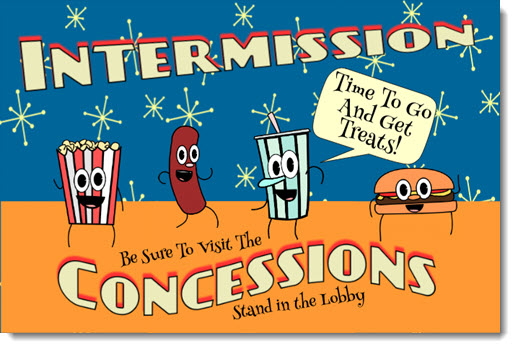 Earlier this year in a tweet that sparked a thousand different discussions across #FilmTwitter, we all had an opinion about the length of films and that there my be an ideal length for a film experience. Yet, the discussion devolved almost immediately because the user’s tweet invoked the nitpick of a cinema sacred cow, which is what a lot of respondents latched on to rather than the discussion at hand. As with most arguments on Twitter, I stayed miles away from it, but as I’ve begun resuming my normal weekly jaunts to the local multiplex, I can’t help but think that this argument is one that could be reframed. Rather than limit a filmmaker, or, let’s be honest, a corporation who throws ungodly amounts of money at a blockbuster project, what if we pushed for the return of the intermission?

During the showings of No Time to Die, Dune, and Eternals, I found that an hour, maybe an hour and fifteen minutes into the over two hour run time, I had to use the toilet. Like not just “Oh this is annoying,” more like, “If I don’t leave my seat now, I will wet myself,” kind of had to go. This has not been a problem for me in the past. I sat through the entirety of the three Lord of the Rings films as well as all three Hobbit films without so much as an inkling of bladder distress.

Though, what did I do over the year and some change previous? Like most people, I watched movies at home. I watched in a place where I could pause the film, grab a snack, use the toilet and come back and resume. With the slow parts of Eternals, I watched as person, after person, after person, got up and left for the restrooms. Like creatures of need scurrying in the darkness, we are untrained and unprepared for this environment. I even went into Eternals knowing I may have this problem, so I eschewed all liquids starting an hour before showtime. I went before I left the house. I went after I arrived at the theater and for good measure, I went in the midst of the over long trailer for House of Gucci, which seemed hilariously misplaced in front of a Marvel film. Yet, there it was, in the midst of the action, I had the urge and I knew it was no use trying to fight it.

Having an intermission wouldn’t solve all of the minor annoyances of attending showings at movie theaters, multiplexes, and art house spaces, not by a long shot because other attendees exist and they account for about 90% of my gripes with the theater experience. Yet, it may alleviate the pressure of some of these ills. It could be a way for an agreed upon period of time for people to engage in their worst theater behaviors.

Imagine a scenario like this. The pre show continues to exist with its ads and the incomparable Maria Menounos. Sure, we’d even suffer through that silly, kind of charming, Nicole Kidman video that plays at AMC theaters now. But after that’s done, we get right to the film. It starts on time and then, somewhere in the middle, the picture fades, the word “intermission” flashes, the lights come up. As people play with their phones, get up to go use the restroom, ask questions their friends can’t answer, and get a refill on their snacks, the trailers for coming attractions play, low enough it’s not preventing conversation, but loud enough that those who want to can sit back and watch. Invariably the people watching the clips will turn to their partner and say, “I want to see that,” then as their partner struggles to find away to mark down the title or the date of release, the memory of what they just saw flits away. As the tight fifteen minutes comes to a close and people return to their seats, the lights dim, maybe a new Nicole Kidman primer appears, just to catch the stragglers at the restrooms, out for a smoke or a snack, then fade in and the rest of the film plays.

It won’t prevent or impede the guy with the way too bright phone screen from whipping it out at a slow bit, the older couple who can’t not say something, the kid who’s bored walking around loudly, or the oddball who needs to shout out their opinion to a group of strangers who couldn’t care less about it. These things will still exist, but they may become less frequent. Those that can’t hack it will leave or it will provide an out to those that were unsure about the concept, the cast, or the franchise. Theaters could even advertise for a partial refund for those who leave at intermission.

It could also be that there is a shift in the way films are made. If corporate entities know there will be a break it has the potential to give them storytelling options. Some may favor the return of the epic like Gone with the Wind, Ben-Hur, Lawrence of Arabia or Doctor Zhivago in which they cram more story into one package, reducing the need or risk for further installments. Some may actually scrutinize their product and trim the excess making it a lean, but robust film that tells a complete story and leaves one satisfied by it. Some may eschew the risk of the theater all together and pursue the streaming platforms instead, getting more eyeballs at a fraction of the cost of distribution and physical media.

An intermission is not the perfect solution. It has its downsides as the entire theater going experience does and it may actually push more patrons away from the experience all together. Yet, allowing the option would be a load off of an audience’s mind and a pressure off our bladders. It would, even more than overpriced junk food and recliner seats that break down very quickly, make it feel like the audience has a modicum of control over their experience. While that can be a bad thing (see the crowdsourced ideas in Snakes on a Plane), it wouldn’t make the experience wholly worse as some “innovations” or nostalgic impulses have.