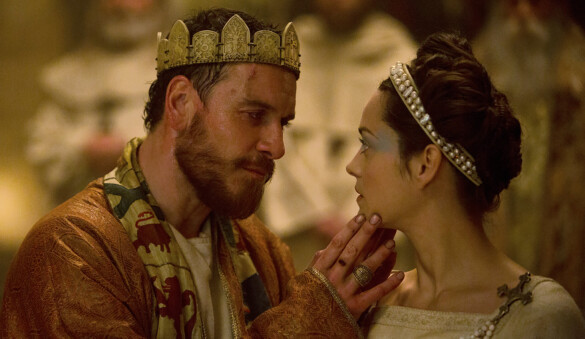 These outside the box contemporary Shakespeare adaptations bend time, place, and drama for unique, ever relevant looks at the same old Bard.

Director Justin Kurzel (Snowtown) helms Michael Fassbender (Shame) and Marion Cotillard (La Vie en Rose) in this counter-intuitive blend of modern meets Scottish castles. Showing usually off screen killings and using symbolic rain for the washing of blood keeps the confrontations and fatal discoveries tense as snips of the done deeds accent a very suspicious coronation. The contemporary grief is best when the innate court intrigue brews, but the supporting cast is unfortunately wasted amid frustrating mumbling and a surprising lack of dialogue for, you know, Shakespeare. Picturesque blue nighttime schemes contrast orange battlefield heat; but candlelit interiors are tough to see, forcing viewers to adjust with every unnecessarily arty scene transition. Surreal phantoms and supernatural mirages jar with the gritty realism, detracting from the cerebral introspection and traumatizing soliloquies. We don’t see enough of the bearded, strained, and stressed Fassbender embodying the festering cowardice– which may be intentional isolation as only the camera comes close while his wife must handle the weapons. Cotillard’s cruel Lady Macbeth vicariously aids her husband’s rise to glory, however giving this ruthless villainess childless sympathy dampens the poisonous scheming. Although the camera rightfully remains on our emasculating Mrs. in a tearful mea culpa church soliloquy, narrating the final battle with no beheading is an unfair, unsatisfactory end. At times, this production doesn’t seem to even like Shakespeare, ramping up beautiful designs but dropping most of the text – resulting in an artistic unevenness that keeps the meta trauma at arms length.

An almost unrecognizable Kenneth Branagh directs and stars as William Shakespeare in this 2018 biopic recounting The Bard’s final years after the 1613 burning of the Globe Theatre. Shakespeare returns to the countryside with autumn leaves, sun kissed silhouettes, and fine attention to Tudor detail. Conversations move at a reflective, mature pace as awkward dinner scenes, tense will stipulations, and gardening struggles mirror the family disconnects. Wife Judi Dench (Victoria & Abdul) puts Bill in the best bed for the guests, reminding him that he spent so much time putting words into people’s mouths that he forgot what’s unsaid matters. She’s angry over his love poetry, too. Did he ever consider her reputation while wallowing over visions of their late son Hamnet? Ian McKellan’s Earl of Southampton also waxes on the read between the lines love, forever young words, and family legacy in a lengthy twofer scene. Shakespeare provided wealth and comfort for his family, paying for a fake coat of arms and, embarrassed about his own upbringing, he can’t understand their bitterness until he realizes they too have unheard stories to tell. Unfortunately, the time spent on his daughters and their creep husbands is uneven as the ideal Hamnet supposition drags on, detracting from the internal analysis alongside tutting Puritan townsfolk and superfluous scandals. The contrived liberties may irritate purists and usually we forgive Branagh his Shakespeare indulgences, however an outside eye not so beloved of The Bard would have smoothed the unnecessary here. Despite excess intrusions, this is a perfectly period swansong.

Sorcery and supernatural storms invoke an in limbo fantasy as Helen Mirren (The Queen) leads writer and director Julie Taymor’s (Titus) role reversal alongside Djimon Hounsou (Gladiator), Ben Whishaw (Skyfall), and Felicity Jones (The Theory of Everything). Brief Milan flashbacks are otherworldly and dreamy to match the old speaketh fanciful, moody Hawaii beaches, and steampunk island lair. Silent film styled German Expressionism photography captures the isolated, airy forests as ships in peril, crashing waves, and seaside winds accent the surreal. Granted, some Ariel special effects montages are cheesy – a post production spectacle in this otherwise outdoor presentation. With a strong cast, self-aware confrontations, and innate Shakespeare parallels, there’s no need to stray with out of place slapstick silly and drunken jester moments obnoxiously sidetracking the first hour. Subtle reflections and nymph music better set off the wild turnabouts as small people live large in orchestrating flawed plans. The appealing youthful romance waxes on if the players are dreaming or awake in their play within a play purgatory. Although we don’t see sympathetic sorceress with a bad wrap Mirren as much, the Prospera switch adds mother/daughter intrigue. Our Dame commands the masculine ruthless and fiery action as one and all plot to entertain themselves; yet find guilt, pity, or comeuppance in a fine finale trading power for compassion. One may not always agree with Taymor’s visionary storytelling, but in this era where most films look the same, this is perfect for viewers seeking something different.

Moor of Venice Laurence Fishburne (The Matrix) has secretly married Irene Jacob’s (Three Colors: Red) Desdemona and jealous ensign Kenneth Branagh plots to destroy them in writer and director Oliver Parker’s (An Ideal Husband) charming, detailed, and risque adaptation brimming with enchanting costumes and medieval swords. The Italian locations are uncluttered and stage-like for the ensemble to plot and spread rumors as lowly, backstabbing Iago sets our tragedy in motion all while contending he is not the envious villain and that his malicious intentions are justified. Branagah’s on screen asides and soliloquies break the fourth wall, drawing the audience into his long-gestating, ruinous schemes. After seeing the titular Fishburne, it’s tough to imagine anyone else as this wronged husband manipulated into his own downfall. The talketh rolls off his tongue, and Fishburne carries the onscreen presence needed for Othello’s extreme nature – making us care, fear his increasingly maniacal asides, and kick him for falling into Iago’s plot. French actress Irene Jacob is a delight, if minimal Desdemona, for we see more of the imaginary vixen sowing doubt in naughty visions of the assumed deceit rather than her true adoring wife. The intricate envy, rage, and betrayal are beautifully written, and Shakespeare’s four hundred year old commentary on race, culture, and religion remains a transcending examination of what power, love, and deception can do.

Annette Bening (American Beauty), Robert Downey Jr. (Iron Man), Maggie Smith (Harry Potter), and more join Ian McKellan for this fascist re-imagining from director Richard Loncraine (Wimbledon) alongside typewriters, telegraphs, tanks, and gas masks. Richard uses a microphone for his expected soliloquy as zooms on his mouth indicate double talk and duplicitous plots. Our disfigured Duke of Gloucester preens in the mirror before addressing the camera directly with his plans. He’s suave in his decorated uniform and villainous mustache yet off kilter, unkempt, and clearly insane. Though recognizably thirties with swanky cars, jazz, Art Deco glamour and careful period detail; there’s an anachronistic surreal to the fedoras and noir silhouettes – as if the Imperial and aristocratic ways of footmen and tiaras continued into the jet set unchecked toward their inevitable Nazi parallels. Richard’s sowing seeds at Tower of London bunkers and board room committees are unable to stop his armored train. The old speaketh remains stage-like one on one tension as each scene lays a piece of the brother against brother plot. Hired killers provide gangster style executions with bloody bathtubs, drugs, and bedroom impalement. Richard talks to us while he’s watching his coronation film reels, gleefully letting the viewer in on the dictator vanity once his ruse succeeds. This interpretation may be confusing for newcomers, but the visual symbolism and layered subtext demand several viewings – a period piece pressure cooker proving how provocative Shakespeare is when outfitted with machine guns, power stations, and airplanes.