Movie Review (SIFF 2022): ‘The Blind Man Who Did Not Want to See Titanic’ is a Unique Visual Experience 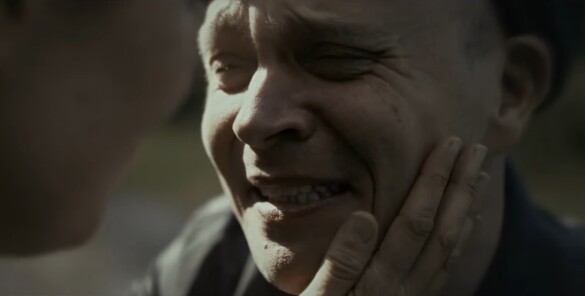 Synopsis: Jaakko is a blind man who is confined to a wheelchair. He is in love with Sirpa, with whom he has had a long-distance relationship but only by telephone. The two have never met in person. One day Jaakko decides to travel to meet Sirpa, relying on strangers’ help to make the journey.

The Blind Man Who Did Not Want to See Titanic is a film that catches you off guard at first. It takes a few scenes to really understand what writer/director Teemu Nikki is aiming for with his visual style. The shot is always in close up and outside of the small circle, there is a blur, an edge to our perception of what is happening around Jaakko (Petri Poikolainen). Nikki and cinematographer Sari Aaltonen create a visual aesthetic that interprets Jaakko’s blindness in a way that the audience can still pick up on visual clues, but impairs us to give a small taste of what our hero experiences.

The sound design takes on the heavy lifting in the film and draws our attention to what we need to know from what we can’t see. Sound designer Sami Kiiski and sound editor Pietu Korhonen layer in sound beautifully to complete our sensory experience. There is a great scene as Jaakko sits and waits in the train station and as the camera maintains its tight focus on Jaakko’s face, we suddenly hear the woman walking behind him, then the man in the electric wheelchair just after her, and the camera slightly pans to reveal their blurs. This soundscape adds so many layers to the narrative. It helps us through the transition from the romantic dramedy to the thriller the film becomes.

The shift is subtle and it starts out with something that looks like it may be a throwaway scene, but evolves and heightens with danger. The visuals help to create this sense of unease and tension because we can see that there is something wrong, but not yet what could happen. Our fear for Jaakko is suddenly beyond just how he will get around or if there will be people to help him. It’s now thrown into the chaos of people attempting to take advantage of him and exploit his condition. Jaakko’s resilience in these scenes keeps us upbeat even as his chances diminish rapidly. He’s smart and angry, which keeps him alive.

The Blind Man Who Did Not Want to See Titanic would not be as engaging as it is without the immense talent of Petri Poikolainen. An actor who himself suffers from the effects of multiple sclerosis and blindness as Jaakko does, Poikolainen brings that pain, fear, joy, and yearning to his every expression. There is a gorgeous scene in the film in which Jaakko, saying goodnight to his long distance romantic partner, Sirpa (Marjaana Maijala), plays a song that the two of them sing to together. He asks Sirpa to describe what she would do if the two were together. As she does, the anguish that comes across Jaakko’s face is heart-rending. Poikolainen lets the feelings wash over him and he makes us feel every moment, yearning along with him.

This film will make you smile with Jaakko’s love of John Carpenter films and his disdain for the later work of James Cameron. It will make you clutch your hand to your chest as Jaakko is wheeled toward an uncertain fate by the man we only know as Mr. Scorpions (Samuli Jaskio). Then it will bring you back from the edge with its truly beautiful ending. The Blind Man Who Did Not Want to See Titanic is certainly off the beaten path, but well worth the journey.