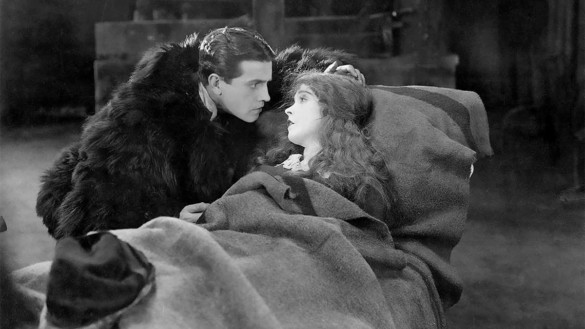 Way Down East (1920) features one of the purest expressions of his disturbing, often contradictory romanticization of suffering. So many of his collaborations with Lillian Gish hinged on her playing a vulnerable, fragile young woman who is trapped in a world that doesn’t possess her innate goodness or purity of heart. Her heroines are put through the wringer in Broken Blossoms (1919) and True Heart Susie (1919), with Gish providing operatic displays of intense emotion in response to the horrors that her character faces. She receives credit for bringing an unprecedented level of subtlety and emotional dexterity to the roles that she played and in the process, she modernized the art of screen acting. Way Down East might be the most operatic of all of their collaborations. It is mounted on a far grander scale than the comparatively modest True Heart Susie, as well as asking Gish to draw out the theatrical gestures that she specialized in. As a tribute to the breathtaking vigor behind so many of those legendary Gish close-ups, Way Down East is more than adequate.

Griffith took inspiration from Lottie Blair Parker’s enormously popular play of the same name and he and Joseph R. Grismer faithfully adapted it to the screen. Gish portrays Anna, a beautiful, naive country girl who is thrust into high society when she is sent to live with her wealthy relatives. She is not popular with them but achieves success in high society because of her virginal, pure appearance. Her innocence causes her to pounce upon any opportunity to get married and receive the love that she has always dreamt of. The dastardly Lennox (Lowell Sherman) fools her into getting married to him, as part of a fake ceremony, before abandoning her when she gets pregnant. She gives birth to the baby and is devastated when it dies. After the loss of her beloved child, she tries to reinvent herself as a maid and chooses to work for Squire Bartlett (Burr McIntosh). Through hard work and determination, she becomes a well-liked member of the Bartlett household, and young David Barlett (Richard Barthelmess) falls in love with her. When Lennox re-enters her life, she realizes that he may seriously damage her reputation.

It’s a lengthy epic that is chock-full of unexpected twists and turns but Griffith’s interest tends to stray from the plot at hand. When he isn’t lovingly photographing Gish, he’s capturing the dark recesses of a stately old manor. He has a way of filling up the frame that makes this feel more cinematic than the other play adaptations of the period. I’m not suggesting that spareness and Brechtian use of meta commentary on the concept of making a film have no place in cinema, I just feel that Griffith’s films gain a warmth and familiarity from the crowded, ramshackle appearance that many of the locations take on. Rather than giving off the impression that they have been designed to within an inch of their life, even though they probably have, every room in the Bartlett household looks like it has been inhabited for years. It doesn’t have the showroom quality that so many on-screen family homes have. There are signs of wear and tear on some of the furniture, none of the knick knacks sit ramrod straight on the cabinets and Griffith doesn’t try to hide the fact that the actors are often awkwardly positioned. This is just one of the unusual touches that he brings to an utterly unrealistic, highly mannered melodrama. The emotions of the piece and the storyline exist to create situations in which Gish can cry, scream and thrash around. The set dressing is there to remind us that Anna does have the opportunity to find real happiness, instead of living in a world that is completely cruel and unfair.

The whole film really builds up to the big set piece that lets the story go out on a bang. After Lennox has besmirched her name, she walks outside and ends up standing on an ice floe in the middle of a storm. The ice floe is floating down a river, towards a waterfall, and Anna is so physically weakened that she can barely fight against the current. Griffith manages to work wonders with this scene. From the very moment, it begins, as we see a vulnerable figure off in the distance, resolutely walking through the snow, we can sense that this is something special. In the next few minutes, Gish puts on a masterful display of physical performance. Just through throwing her hand into the freezing water or pressing her chin into her collarbone, she gives us a sense of the peril that Anna is in. This is to say nothing of James and Rose Smith’s editing. They draw suspense, terror, sentimentality, and eventually, joy, out of just a couple of shots. The choice to pay more attention to Gish’s limbs than her famously expressive face would seem to be risky but it pays off in a major way. They ended up creating an iconic moment.

The inclusion of Way Down East on this list has restored my faith in AFI voters. If they can see value in a masterpiece like this, they might not be the philistines that I had previously assumed them to be. It is still difficult not to resent them for ranking this lower than The Way We Were (1973) but I have low expectations of them at this point.